On the day I turn 30, I will hit the ground running. Pretty much literally. 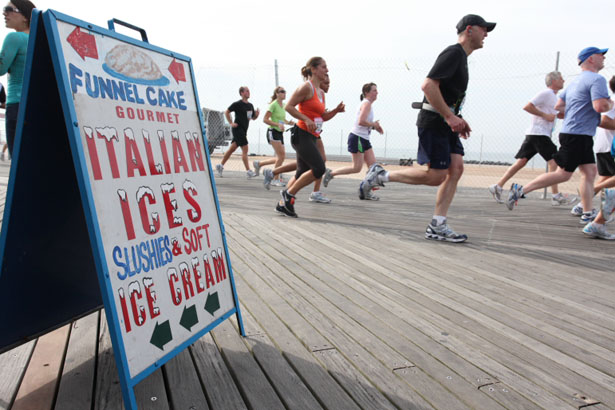 Last Tuesday I signed up for the Brooklyn Half Marathon, which is taking place on May 21, 2011. That means no getting drunk on the eve of my birthday—at most, dinner, a drink and maybe some cake? But early to bed and early to rise. I'll have to keep my eye on the prize: the funnel cake, Italian ice and beer at the finish line in Coney Island.

Since I got into running, it became an unwritten goal for me to run all of the borough half marathons. Last year, I ran in the Queens, Bronx and Staten Island half marathons. This year, I'm adding Brooklyn to the list and planning on running the other three boroughs again to get guaranteed entry in next year's NYC Half Marathon. I haven't been too good about running the past few months because I can't stand the bitter temperatures outside and found it difficult to get motivated to run on a treadmill. But as usual, signing up for a race worked its magic. Today, I was able to pry myself out of bed an hour early to get a bit of running in even though I have a cold and was quite honestly a little tired from a late night of hookah and cocktails with the girls. Hopefully, the motivation continues in days to come.

In the meantime ... as of today I have exactly 99 days left to go! Isn't that just unreal? I can't believe how much has happened since this project started—and it blows my mind that there's still so much more to come! This Saturday, I'm hitting the powder (numerous times with my ass, I'm quite sure) to give snowboarding a shot. Next week, I hop on a plane to New Orleans for the kick-off of Mardi Gras season. Zoe and I are done booking everything for Mexico and our mini road trip to Chichen Itza in March. Coachella music festival tickets? Bought long before they sold out. Plans are starting to firm up for a quick visit to Hong Kong to visit my dearest Tamara, who will join me in bungeejumping off Macau Tower. And my bestest girlfriends in Manila and I are in the midst of planning trips to swim with whalesharks, spelunk into caves and swim in volcano craters.

When I think of everything that's happened because of this project, I can hardly believe it. It's given me amazing experiences and at the same time molded me into a person I'm truly happy to be. I'm glad that I'm choosing to start my 30s on a strong note by running in the Brooklyn Half Marathon. It's a statement to myself that turning 30 will not slow me down.