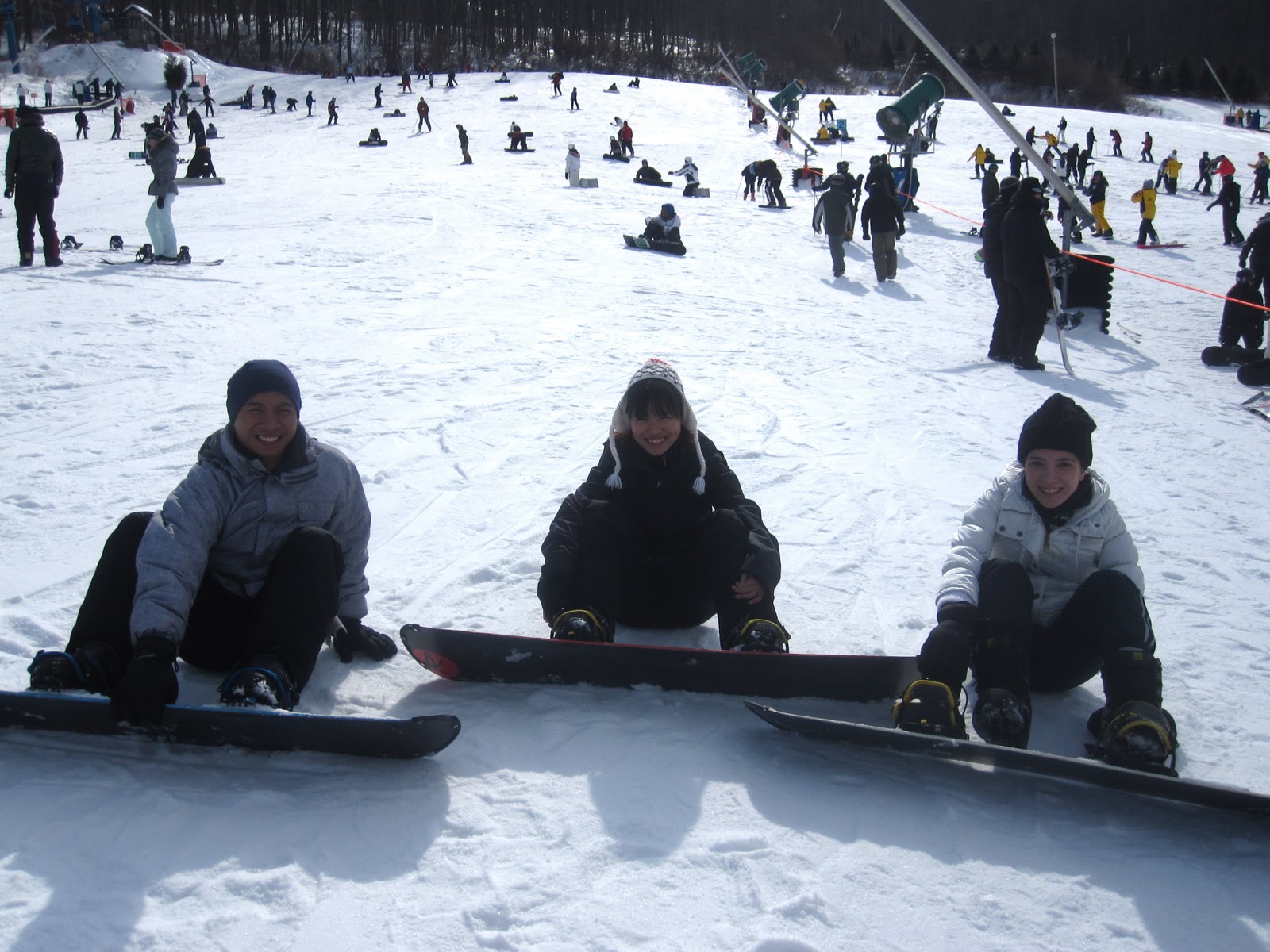 It's been almost a year since I wrote my 30 Before 30 list, and looking back I wonder about my choice of words. Why did I write "Learn the art of aerial silks", which implies commitment and firm belief that I could actually do it? Conversely, why did I phrase #17 as "Give snowboarding a shot", as if I didn't really want to do it but thought well, I suppose it's something I should at least try?
I guess a year ago I didn't know what I now know about myself. As far as physical capabilities went, all I knew was that I'm flexible at least, so I thought learning aerial silks would be easy (boy, was I wrong). I did not consider myself remotely athletic or adventurous so I didn't know how I'd take to snowboarding. But over the course of the year, I learned a few things about myself: I am athletic enough to run for 5 hours straight, and adventurous enough to jump off a plane, hike up a cliff with sheer drops, and keep surfing even after getting whacked by a surfboard thrice in one day. So by the time I finally got to the slopes to learn how to snowboard yesterday, you could say I'd become a different person from that girl who first wrote this list. I didn't just want to give it a shot; I really wanted to do it, falling and bruising be damned.
So off we went for a Saturday at Shawnee Mountain in the Poconos in Pennsylvania. I started my morning on the slopes with Monica (who's also a newbie, so I had company getting my ass kicked), and Noah and Moey (who had the patience to teach and babysit us as we got slammed by the slopes). Our friends Mia, Monina and Steve were also learning to snowboard that day but had gotten in an hour early and were in a different class from Monica and I. While we waited for our beginners class, Moey and Noah taught us some basics like how to skate, how to get up, and how to fall. I have to say, I felt like our "pre-lesson" was the most productive part. Monica and I learned how to keep our balance on the board and do some riding. 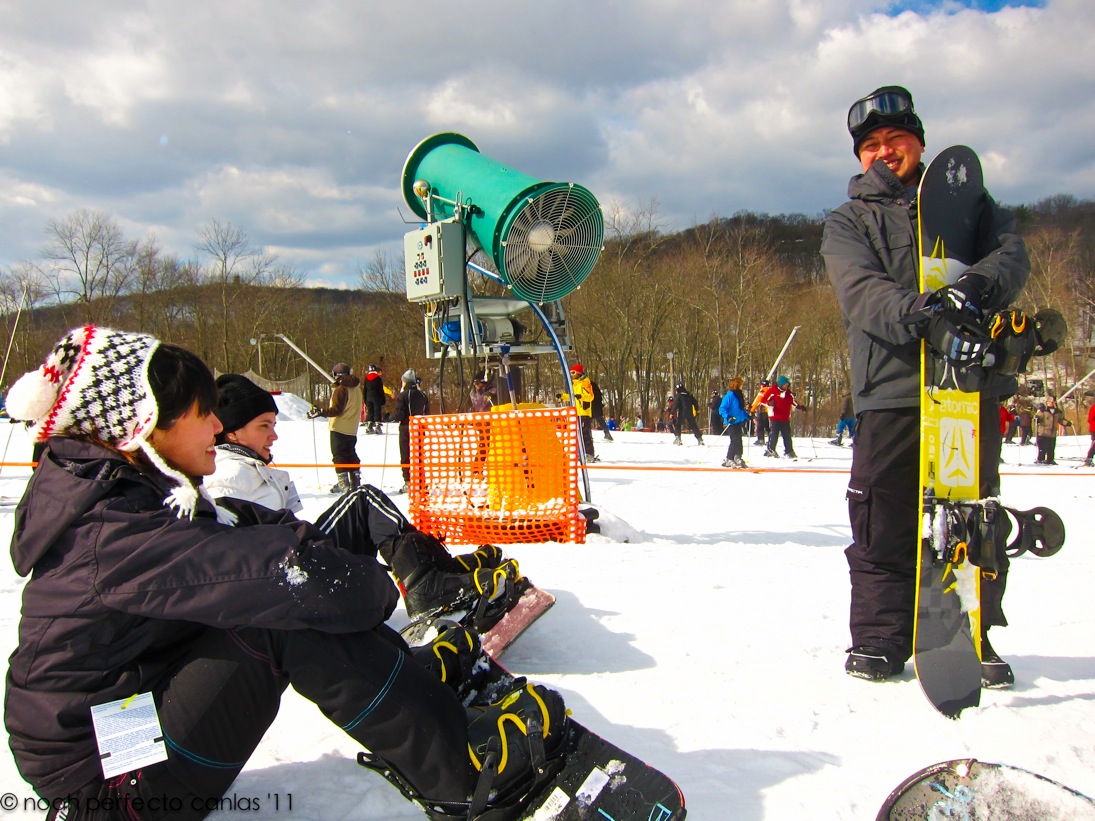 The problem was, I couldn't really get the concept of stopping. At the same time, I loved riding and the exhilaration of picking up speed. Not a good combo. I would ride and speed up until I got scared and then ... I would throw myself on my ass. Kinda fun for the first few times but not a good longterm strategy.

At 1:45, Monica and I went for our beginners class. Our teacher, a nice kid from Pennsylvania, was skillful and taught us the concepts of toe turns, heel turns, toe sides, heel sides and the falling leaf. I say "concept" because I don't think I really got it. Well, okay I'll be honest, I really didn't get it. What happened next illustrates just how much I didn't get it.

By the time we'd finished our late lunch of cooked-to-death burgers, onion rings and improvised cafe mochas, it was almost 5PM. Our more experienced boarder buddies John and Mitch suggested we come along to take on the green slope. Blissfully delusional as usual, I wholeheartedly agreed. I had absolutely no concept of how long or high this slope was, by the way. Our friend Gi said it would take us about 30 minutes to get up and go down, which would be perfect cos he had to get back to the city soon. It didn't occur to me that he was estimating based on the time it would take for people who actually knew what they were doing.

Things started unraveling for me as soon as we stepped out of the lodge. First of all, my rented board disappeared. We spent about 10 minutes looking for it before going to the rental area to ask if someone had taken it by mistake and returned it. "Do you just want a new board? Don't even worry about it; it happens all the time," said the sweet girl at the counter. She gave me a new board and off we went to the ski lift, me feeling a tad unsettled already. As we strapped on our boards and skated to the line, John starts to explain the technique for getting off the lift. Crap. There's a technique? It only hits me then that ski lifts don't stop to load and unload people like, say, a ferris wheel. (Please don't think I'm a moron; I just grew up in a country where the only seasons are "dry" and "wet.") 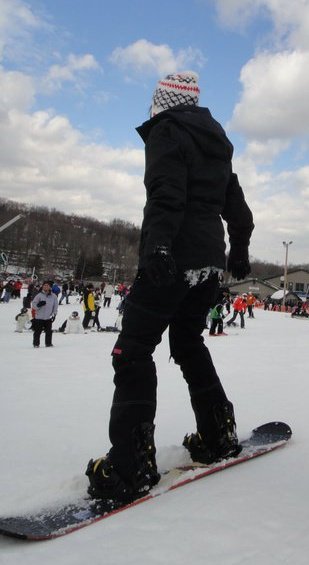 I snowboard down ... pick up speed ... and WHAM! I fall so hard that my silly little winter hat flies off. Mitch boards down and brings me my hat while Moey sits beside me and talks me into giving it another go. I get up, go again, and don't get very far before I feel like I hit a bump and come crashing down again. Noah comes and tells me I keep falling because I'm going on my toes too much which causes me to brake hard. And then we hit a bit of a bad spot where I can't get myself going because every time I do, I seem to veer in the direction of the trees. At one point, Noah takes off his board and tries to walk me to the center of the path but I actually manage to take him down. It starts to turn into my own personal shitshow. I start feeling panicked and hopeless. Shoot, I know this feeling. The last time I felt like this was during my pre-test driving lesson. I hate being a bad student and failing makes me go into total shutdown. I have to fight it.

I apologize to Noah profusely and try to go again. I get up, get going, pick up speed, freak out and crash. This pretty much happens in a loop for the next 45 or so minutes. We make it two-thirds down the way before I throw in the towel. By now I am exhausted and can barely pull myself up. Plus my hands are freezing because I forgot, of all things, to buy waterproof gloves. Noah lets me walk down as it's getting late and we all need to get going.

So tail tucked between my legs, I trudge down the slope feeling somewhat sucky. I didn't kick ass at snowboarding; the slope kicked my ass instead. But you know what? It's okay cos I took the blows and tried to keep going for as long as I could. I got slammed around pretty hard: my hat flew through the air a couple of times, I got the wind knocked out of me once when my rib connected with the ice, and I took enough tumbles down the slope to qualify for a gymnastics event. But I kept standing up and trying again, and as a witless beginner, that's all I can do really. When the lodge finally came into view, I found myself stuck in the middle of three merging slopes. Dammit. I couldn't walk down from there without potentially causing a pileup. The only way, I realized, was to snowboard down. So I strapped my feet into the binding one last time for a final ride and crash, and blessedly I was home free. Completely covered in snow, exhausted to the core, and with knees and bum starting to swell up from absorbing so many crazy falls, but back on safe ground nevertheless.

Later, however, when I finally met my friends again and got ready to go home, these words somehow flew out of my mouth: "Don't kill me for saying this. I completely sucked out there ... but when can we go again?"

Yup, I got my ass kicked by that mountain. But I can't wait to come back for another beating. 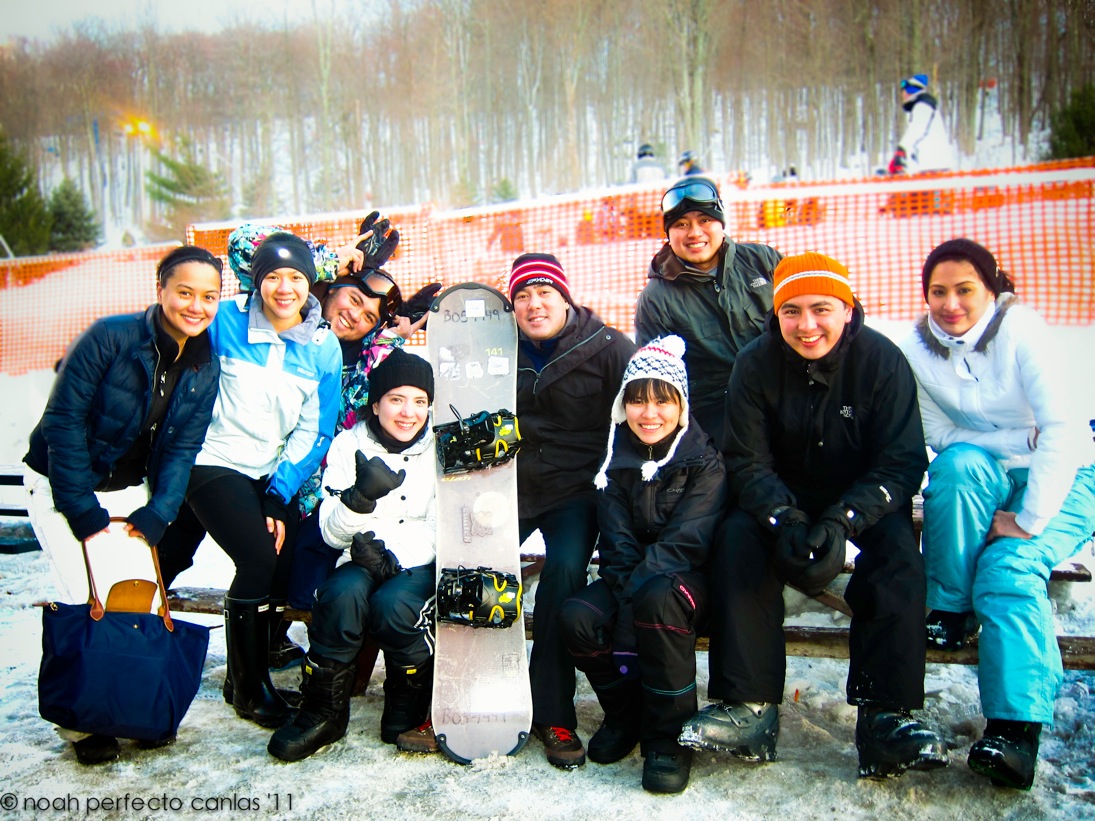 Labels: #17 give snowboarding a shot, adventure