Learning the Art of Aerial Silks

It's a good thing I'm pretty delusional because otherwise, I would never go out and try anything. I have an overinflated sense of what I'm capable of, I have to admit. But if not for that, I wouldn't have experienced half of the things I have so I think of it as a blessing heavily disguised as a curse. Take today's first attempt at learning aerial silks. Normal people would watch Pink hanging upside down in the air from a piece of fabric in concert and in the Grammy's, say "wow that's amazing," and move on. This delusional person here *points to self* sees that and thinks, "Oh cool! I bet I could do that too."
Well. There's a reason why aerial silks are normally seen in Cirque du Soleil, darling. It's because its not that easy.
Today, Kate and I trekked over to the Trapeze School of New York for our first aerial silk lesson. So glad we decided to take a morning class because the walk to W 30th St between 10th and 11th Avenues is pretty dodgy. I would fear for my iPhone if I was going there at night. The school is inside a massive tent and the first thing I saw upon coming in were people swinging around on the trapeze (By the way, I don't know if you noticed but I initially had "try the trapeze" on my list, thinking aerial silks was a form of trapeze. But I later learned that it's a whole other acrobatic act so I changed it). After I stopped gawking at the people flying about, I saw the aerial silk apparatus: 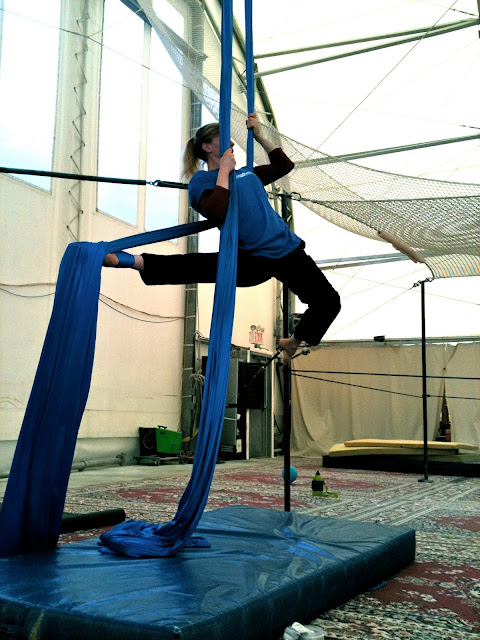 Somehow, seeing it right in front of my face was much more impressive than watching it on, say YouTube. Once I was actually minutes away from doing it, it started to hit me that ummm, this might be harder than I thought! And then the class began. The teacher taught us how to wrap the silk cloth around the foot and thereafter climb up the rope as high as possible with no harness whatsoever. At that point, a voice in my head just said, "You idiot. What the hell made you think you can do this? You have zero upper body strength."
And sure enough, I struggled. In a class of four, I was the runt. The one the teacher looks at and tells, "Ok then, try doing more pull-ups at the gym" before moving on. Kate was a natural! She used to be a gymnast, and pulled herself not just up the silks but into straddles and such quite effortlessly. I suggested she keep doing this and eventually get a night job as an aerial silk artist. I was only half-joking because she really did look like a pro! 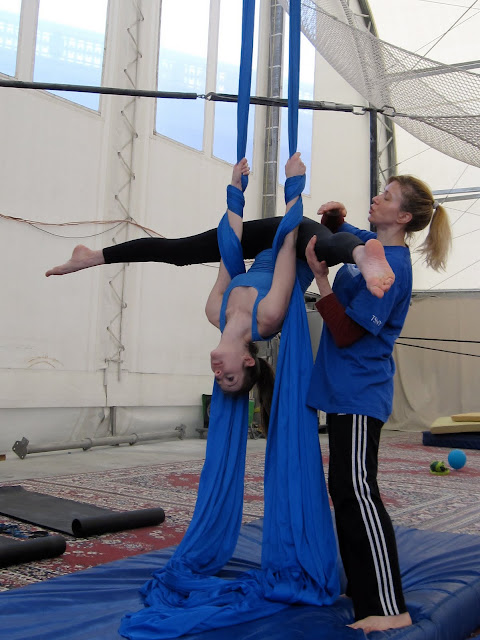 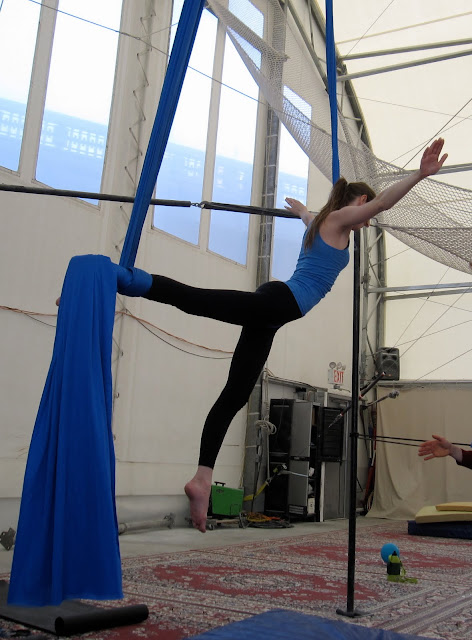 I managed to get in a few cool looking pictures but largely, I was a failure! I was exhausted after pulling myself up 3 times to climb the silks and almost got silk burn on my hands sliding down too quickly. The most complicated thing I learned today was "man in the moon," and it just felt impossible at times to flip my body up and around using my arm and back strength. It's tough to explain but to give you a rough idea, the move involves twisting yourself from here ... 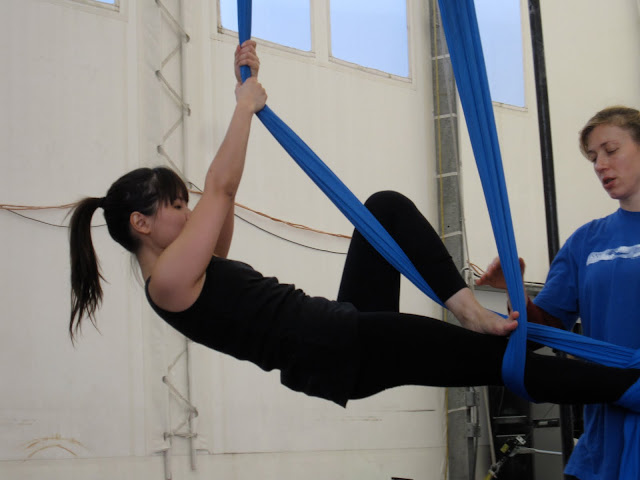 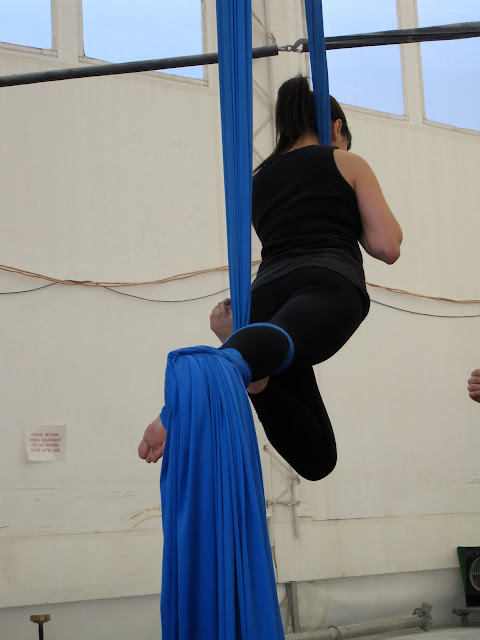 The final pose in the move is what Kate's doing in the second picture above. I didn't quite make it there but I got in a smile for the camera. My foot was kinda killing me at this point, but I am a ham if nothing else. 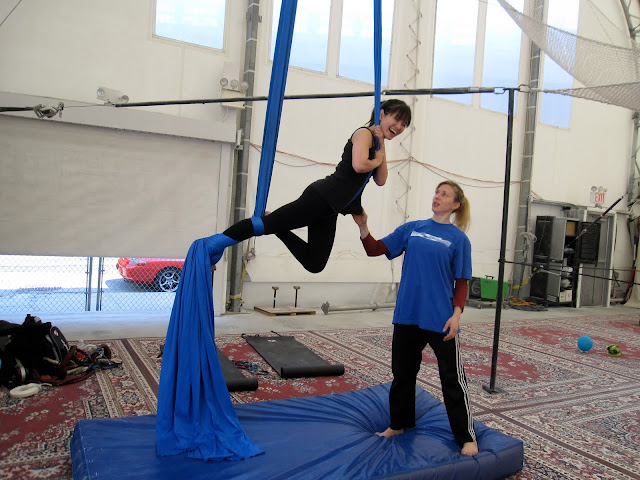 I'm also a glutton for punishment so despite my poor showing today, Kate and I are going back for more! We agreed that I can't tick this one off my list until I can actually do some significant tricks on aerial silks, so you'll be seeing more of these pictures in my blog. Hopefully I'll be less of a loser in the next class.

Now to rest my arms which feel like they're about to fall off ...