I never thought I'd ever be in the kitchen intentionally setting a wine reduction on fire, but there I was on Wednesday, apprehensively watching three bottles of cabernet sauvignon go up in flames: 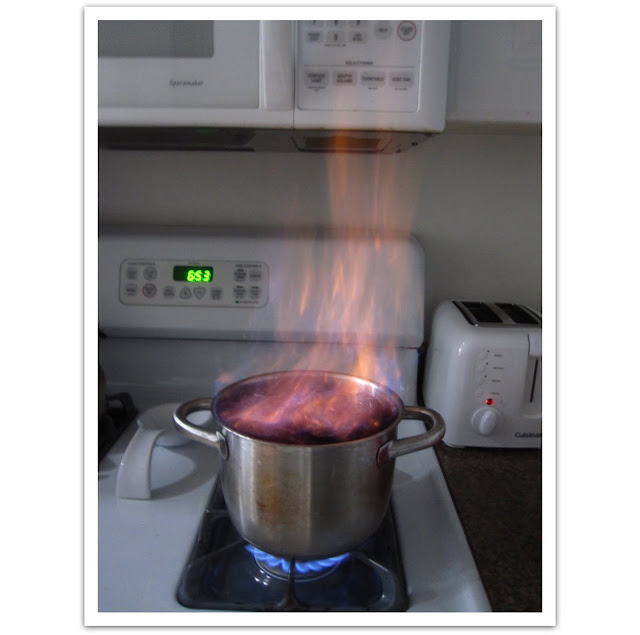 The unknown factor for my epic 5-course meal was the main course: beef short ribs braised in red wine following a recipe of Daniel Boulud sent to me by my friend Ludette. I was extra worried about this course because I only had one shot at it and had to do it unsupervised. But it all went by without a hitch. I started out by boiling three bottles of wine, setting it aflame and reducing it down to half. Then I prepped the vegetables and rubbed down those gorgeous hunks of beef short ribs with oil, salt and pepper, plus a little drizzle of flour. 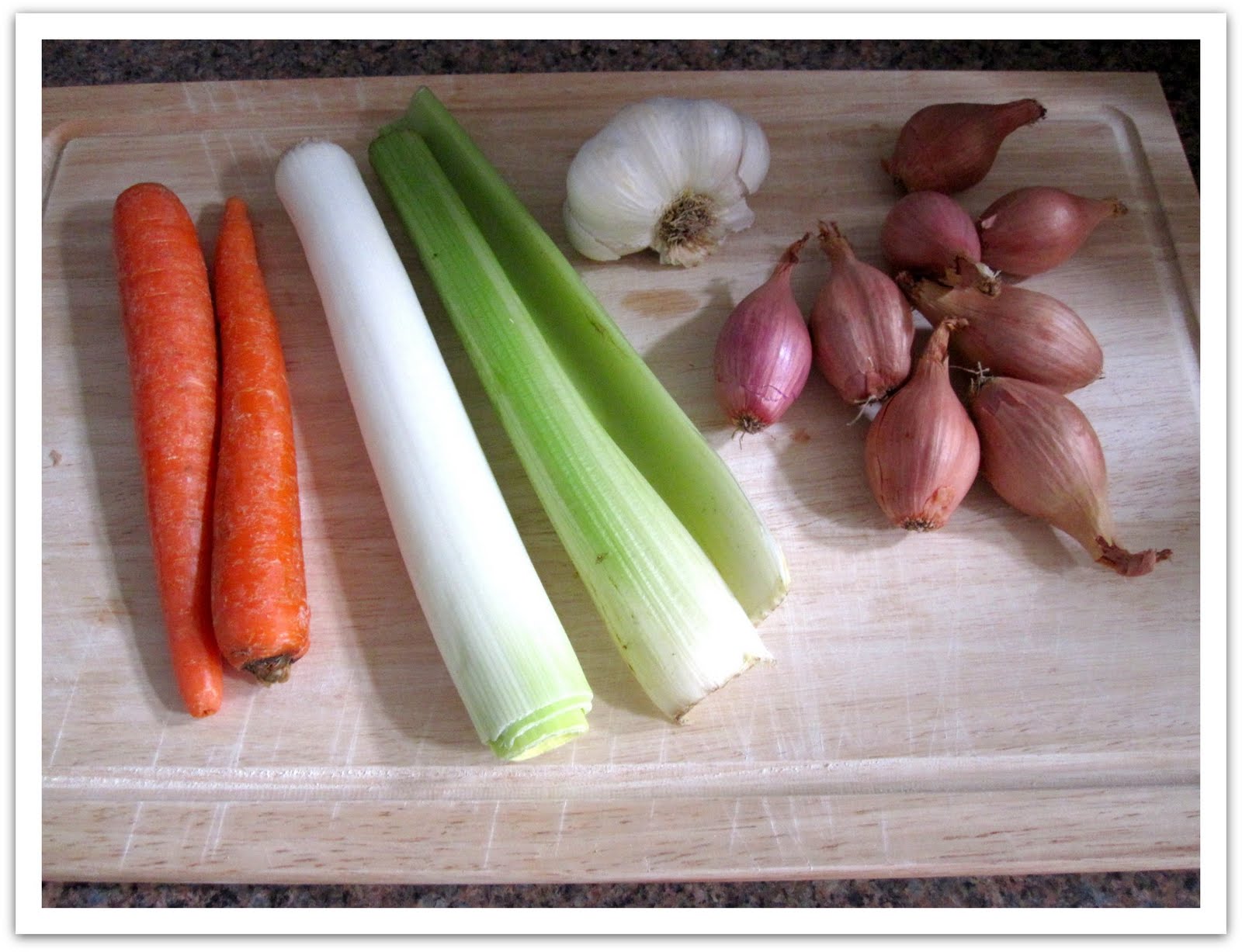 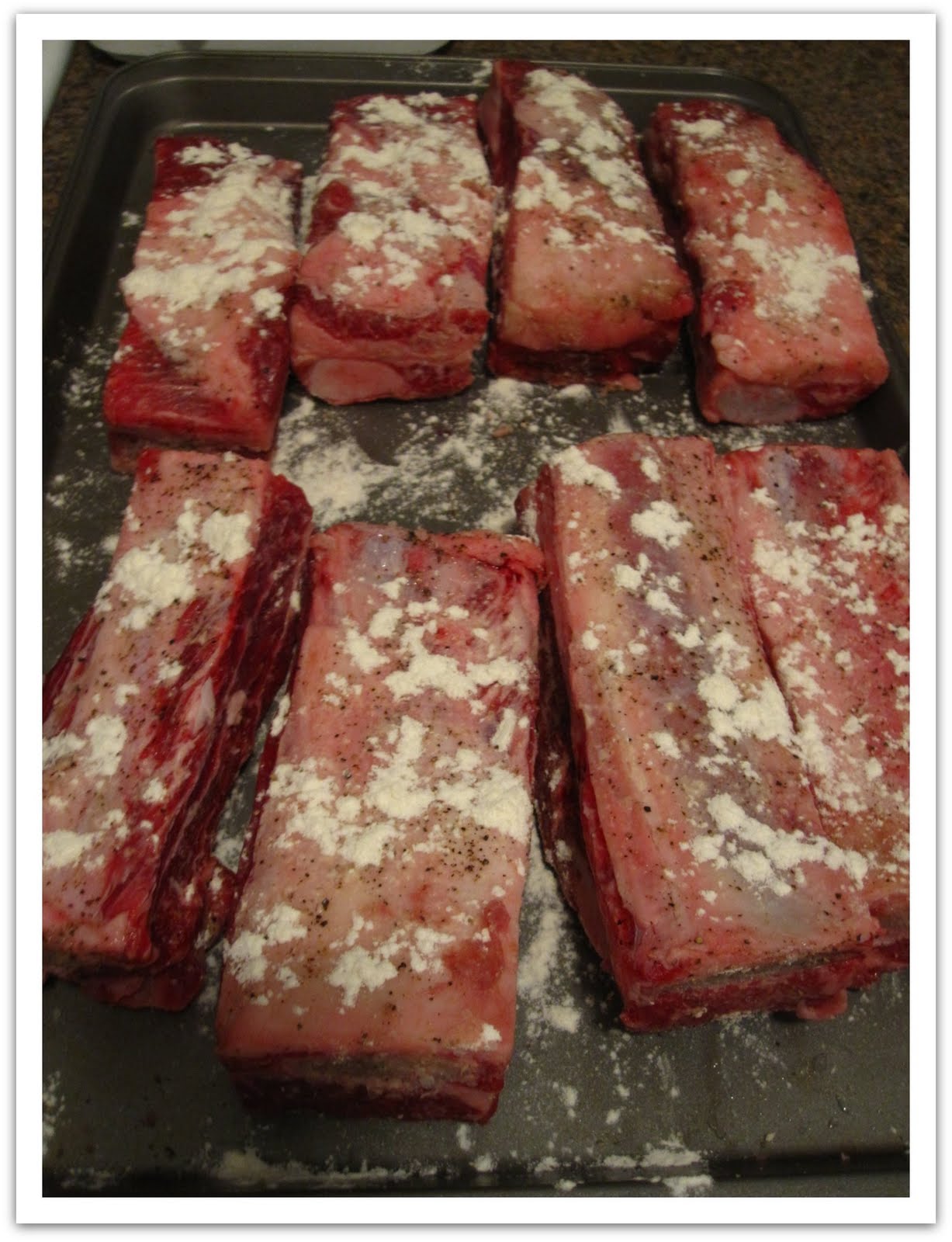 I've always been scared of getting splashed with hot oil so the word "sear" tends to strike fear into my heart. The fact that Chef Boulud says that the secret to the success of this dish is browning the ribs well to get all that yummy flavor into the sauce made the task even more intimidating. But I pulled it off and I feel it's largely thanks to Ludette's beautiful Le Creuset dutch oven, which heats so evenly that browning the ribs was no trouble at all ... 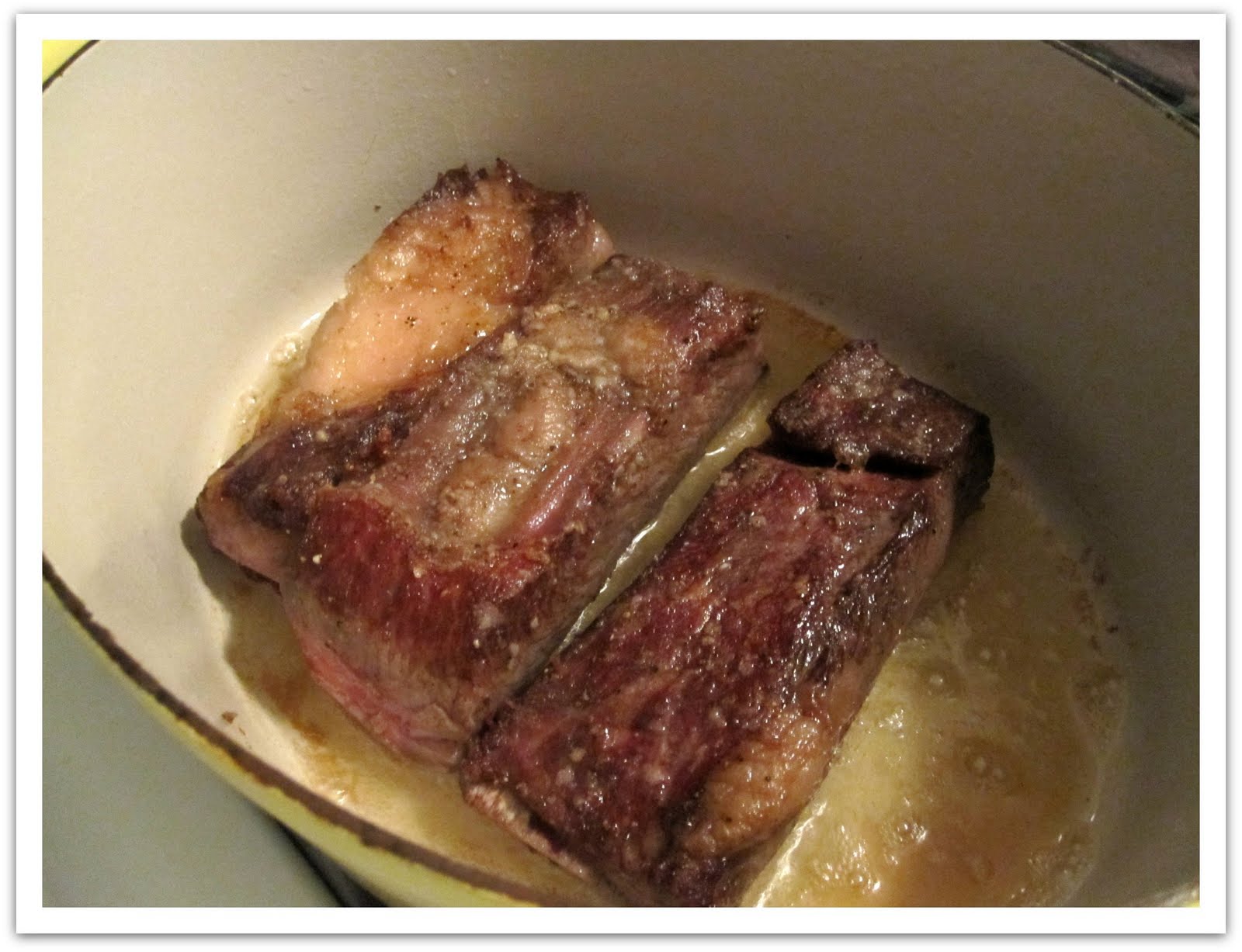 After removing the seared ribs from the pot, it was time to throw in the vegetables and herbs. 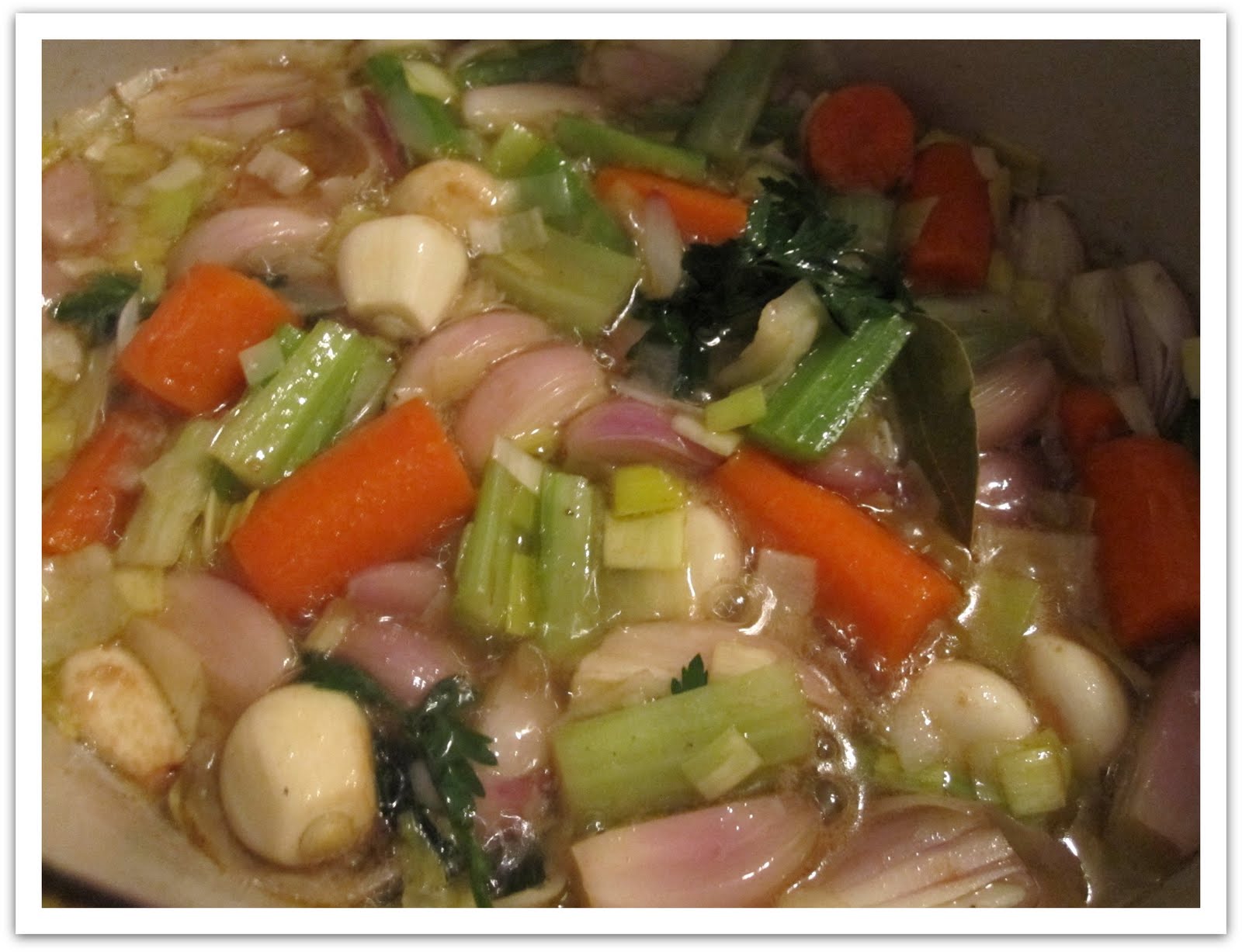 Shortly thereafter, I added in some tomato paste, then the ribs, red wine reduction and beef stock. Putting the heavy pot into the oven was another nerve-wracking part but thankfully I managed to do it without all my hard work ending up splattered on the floor. I left it to braise in the oven for 2 1/2 hours and went about doing other things like laundry and preparing the molten chocolate magic cake batter for the next day. At the end of the night, I had this beauty chilling on my stove: 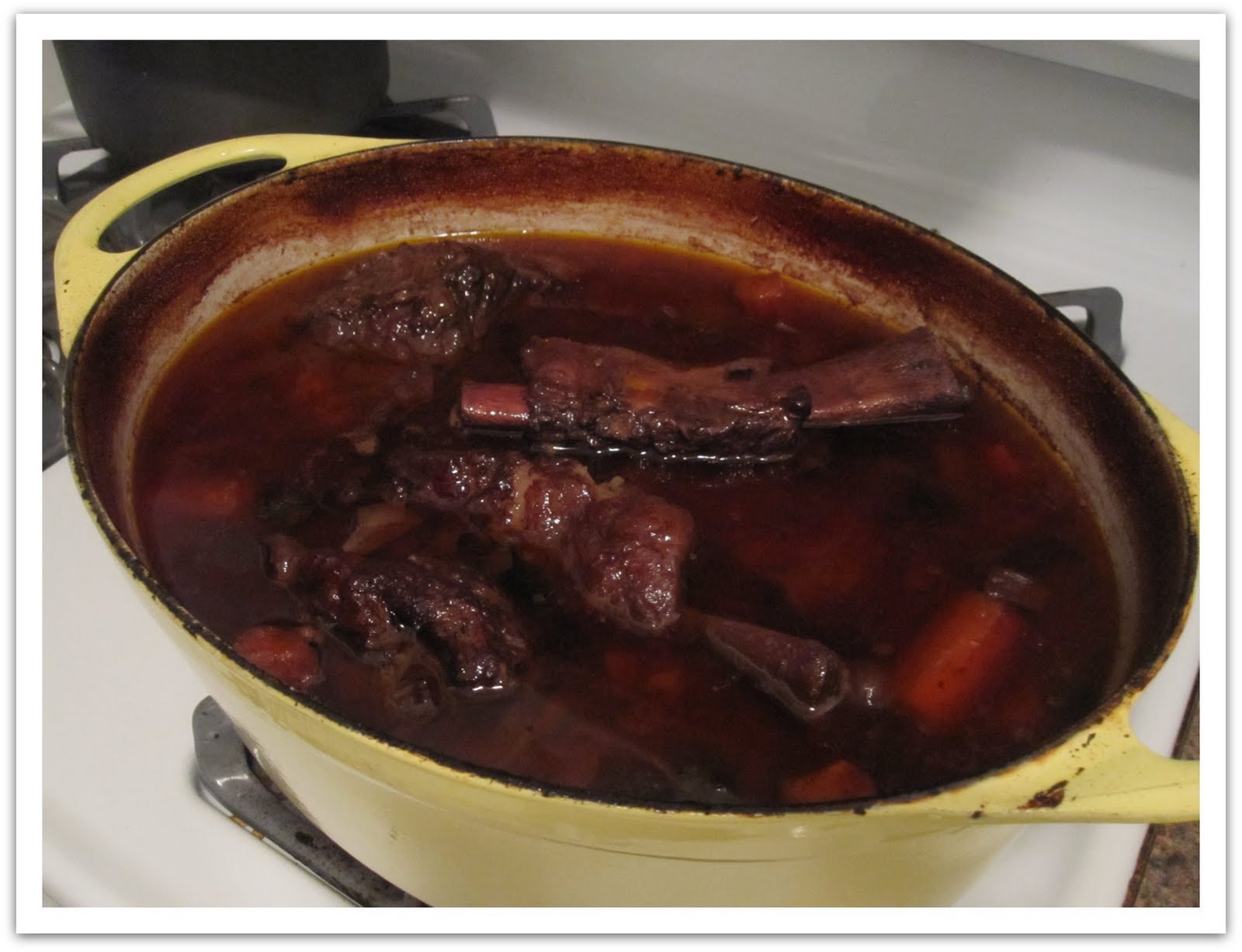 I could barely contain my excitement at the sight of the meat, which was so tender it was falling off the bone! I left the pot out to cool then refrigerated it to continue the process the next day.

Thursday after work, I pulled the pot out of the fridge and found a thick layer of fat had risen to the surface. I scooped out as much of the fat out as possible and discarded it, then reheated the pot on the stove. Once the meat was heated through, I took the ribs out of the braising liquid. They were beautiful and absolutely delicious, even without the sauce! 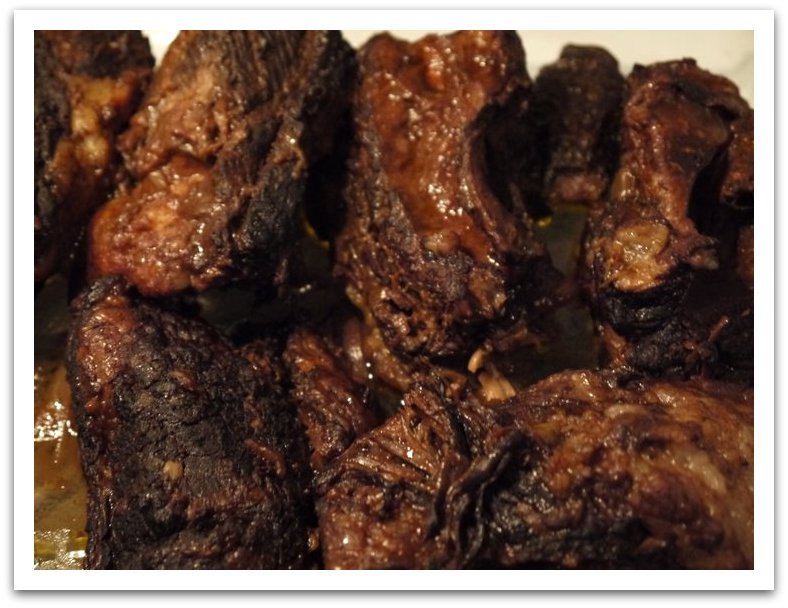 I did intend to serve it with sauce though, so I let the braising liquid boil until it reduced into something thick and super tasty. 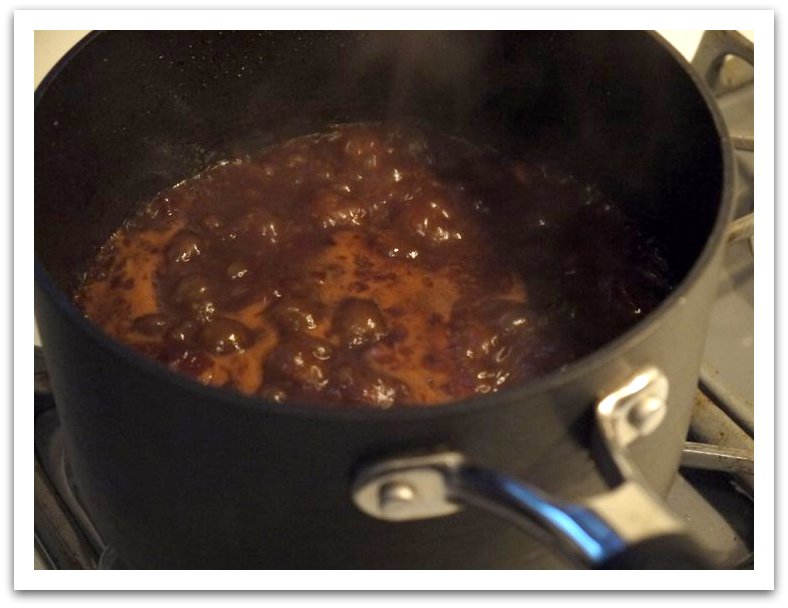 At this point, my guests started to arrive so I presented them with my fool-proof first course: baked brie with apples, golden raisins and walnuts. 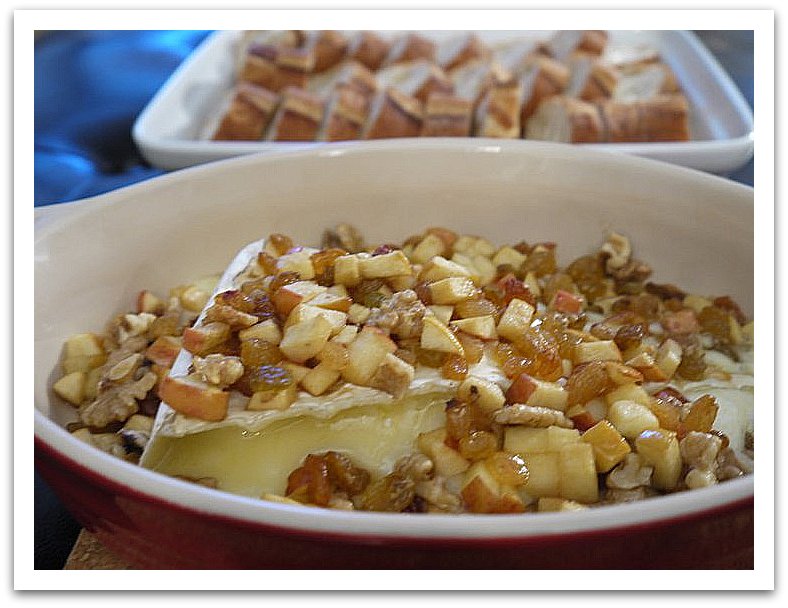 God I love that dish. So easy. While they snacked on that, I got started on the second course. I made garlic croutons, grilled some asparagus on the broiler, and poached some eggs (Holla!). 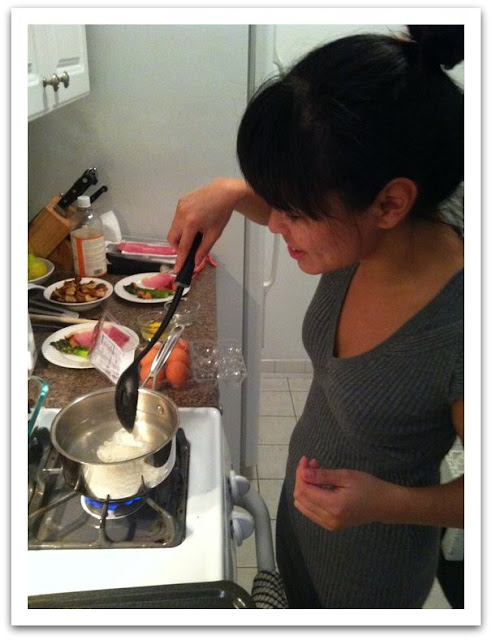 There were no egg casualties this time. You gotta admit, that it is one beautiful poached egg in that salad. Mitch approves. 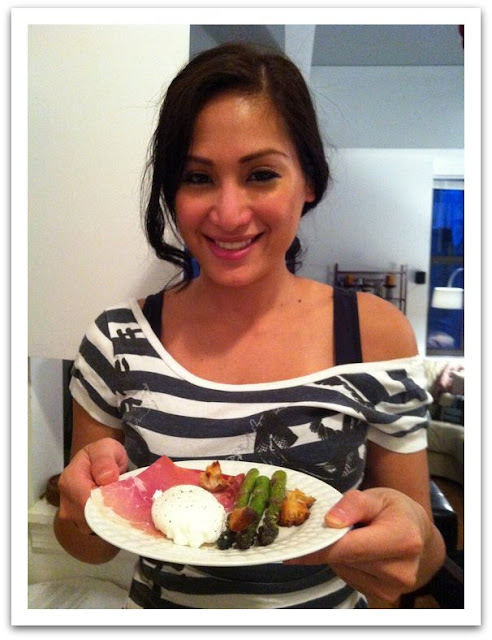 Then, it was time to sear scallops. I got a fresh batch from Whole Foods before coming home that only needed some salt and pepper before going into the pan. Here I am in basting action ... 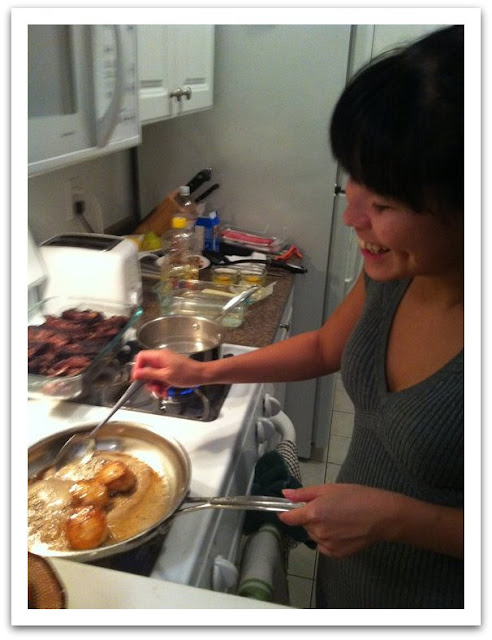 Full disclusure: this meal would not have been such a success had Mitch not been there as I constantly bombarded her with questions like, "Is the oil hot enough? .... What about now?" I may be feeling more comfortable in the kitchen these days but I still need some adult supervision. In any case, I did manage to come up with some truly beautiful and very yummy seared scallops. 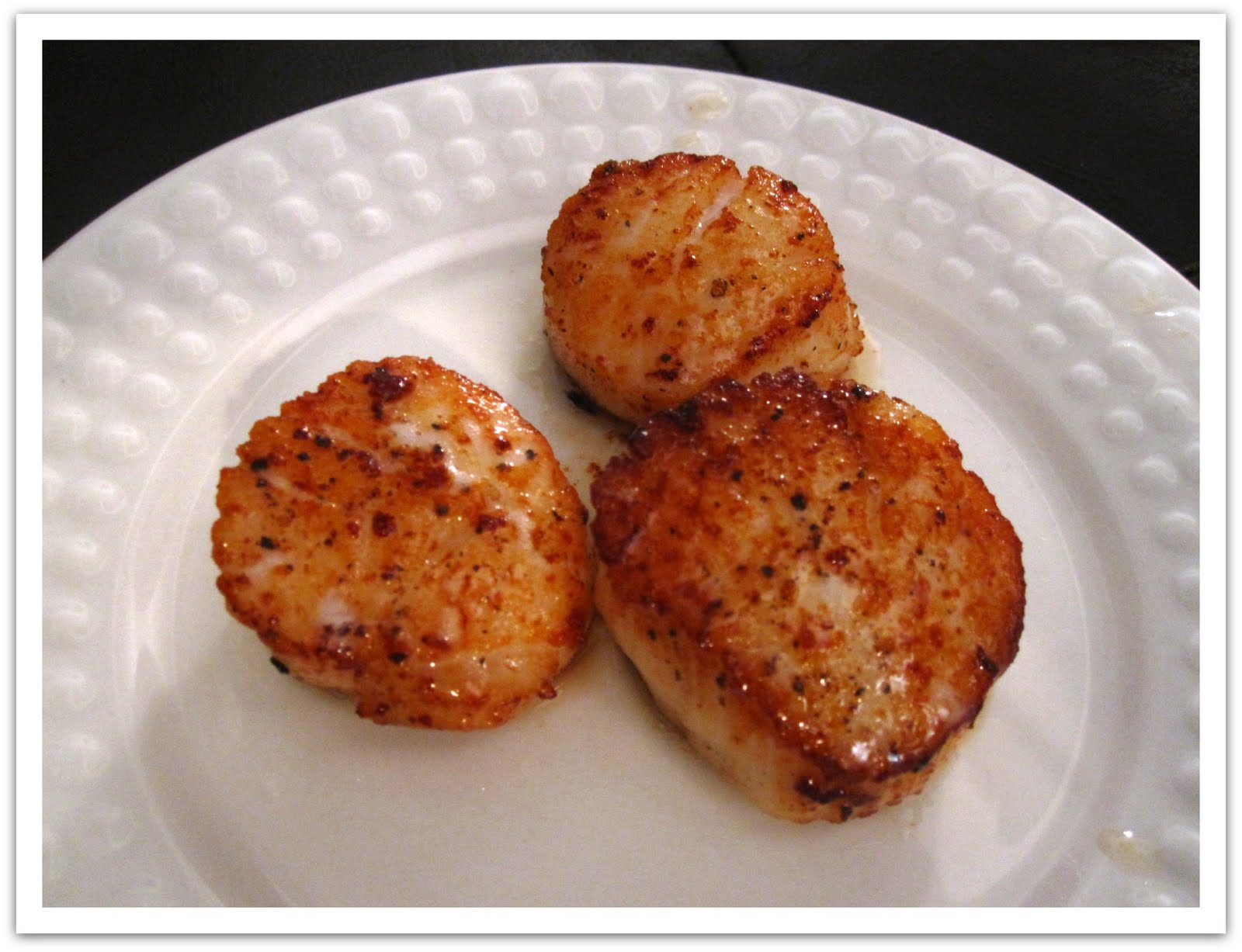 A significant delay followed because we decided the short ribs should come with some mashed potatoes. But when we finally got to dig into the fourth course, we all enjoyed the super tender and flavorful shortribs. The mashed potatoes need some more work but I can live with that. 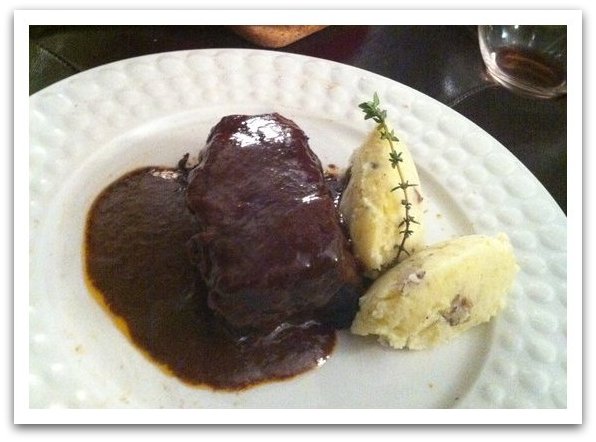 After my failed molten chocolate attempt on Monday, I was overly concerned about leaving the cake in the oven for too long. In the end, it turned out to be a great success and most of the chocolate cake disappeared within minutes. 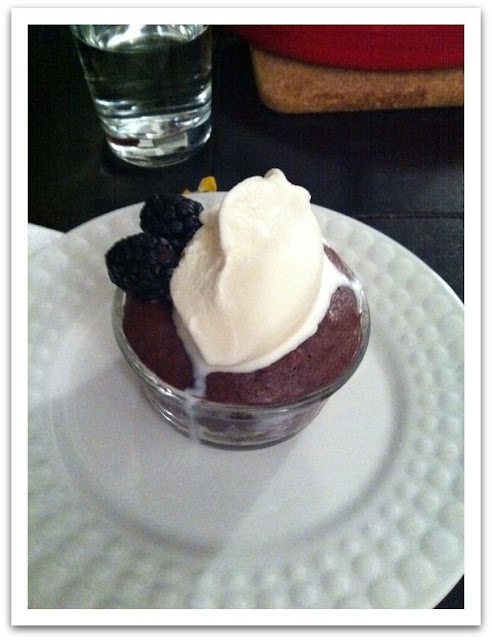 So I'm proud to report that I am entering my 30s capable of putting one delicious five-course meal on the table! A lot of the things on my list consisted of chasing after my youth but this was one of the few that had to do with preparing for adulthood, so it was very satisfying and reassuring that I was able to come through. For someone who only learned how to turn on a stove at the age of 23, you gotta admit this is a massive breakthrough!

A big thank you to my dearest friends who patiently taught me and ate my food, for better or worse, throughout this process. My future family, who will have to survive on my cooking, thanks you all! 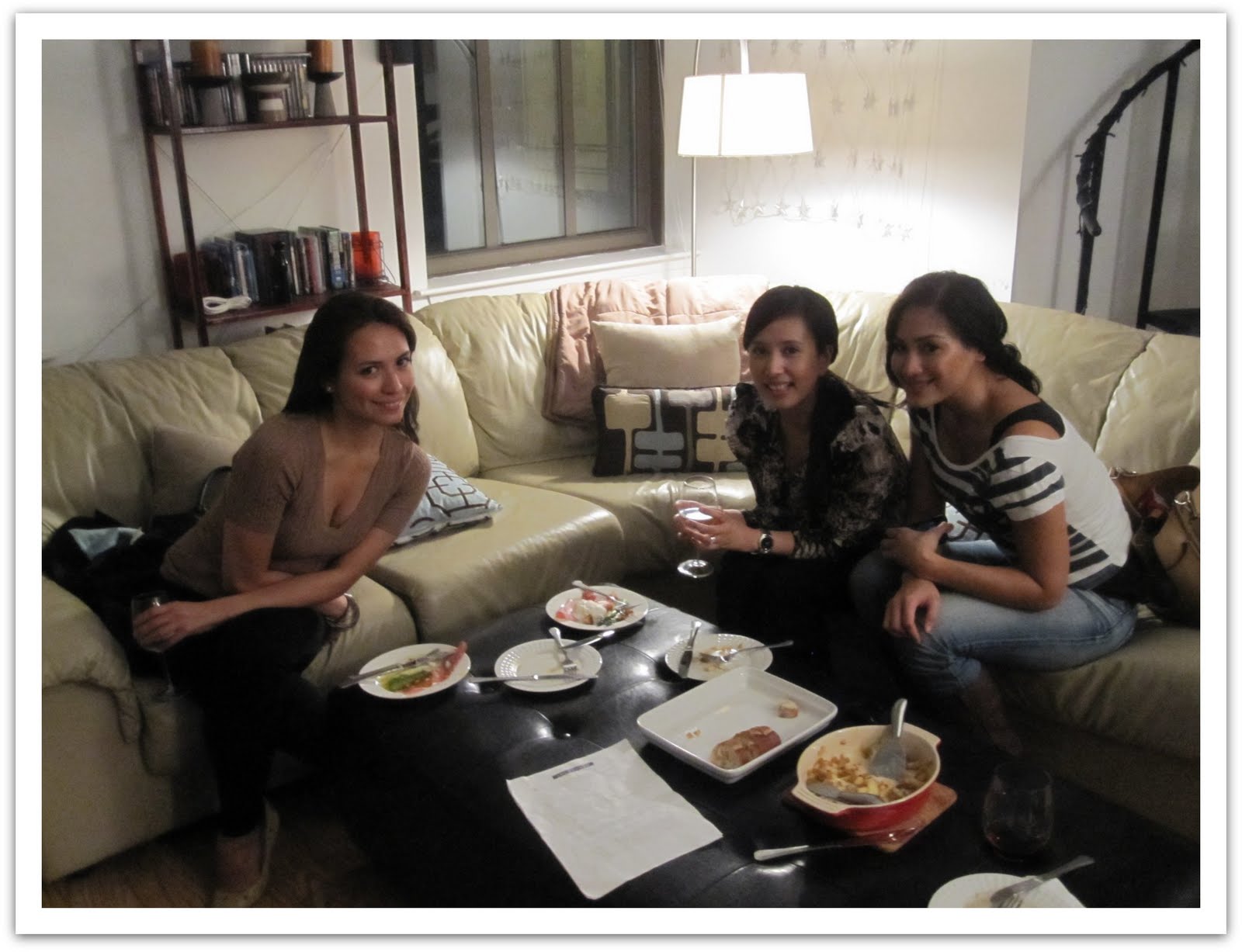 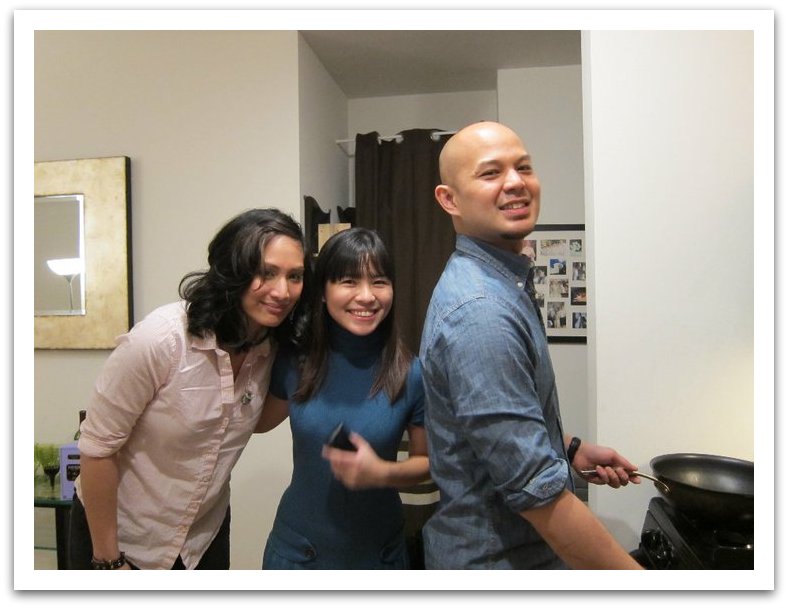 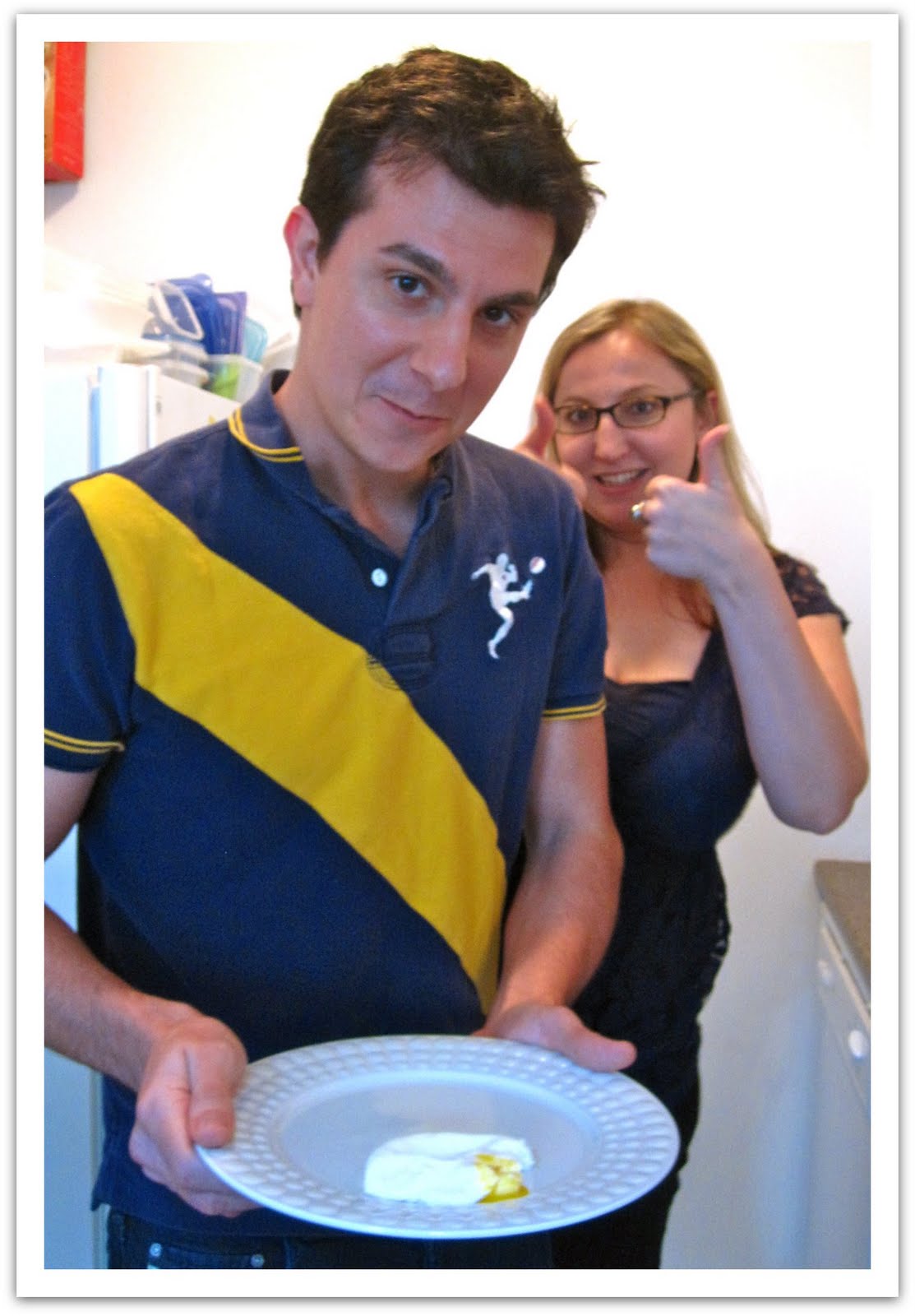