Shoppaholic goes to the Marathon Expo

"Javits Center. Good luck to all the runners on Sunday. Watch your step," said the bus driver as he dropped off a busload of eager marathoners at the corner of 11th Avenue and 34th Street. It would be tragic to have come all this way after months of training and then take yourself out of the race by tripping on the way out of the bus, I thought. Thanks bus driver.

That little announcement just made me think about what a quintessentially New York event the marathon has become. Long before I put on my first pair of running shoes, I would wake up to watch the marathon from my balcony and daydream about how I would love to do it someday. Three years ago, I sipped my coffee while watching runners zip by on First Avenue and it seemed like such an impossible task. But here I am, attempting what I thought was impossible.

It felt surreal to finally hold the bib in my hand. 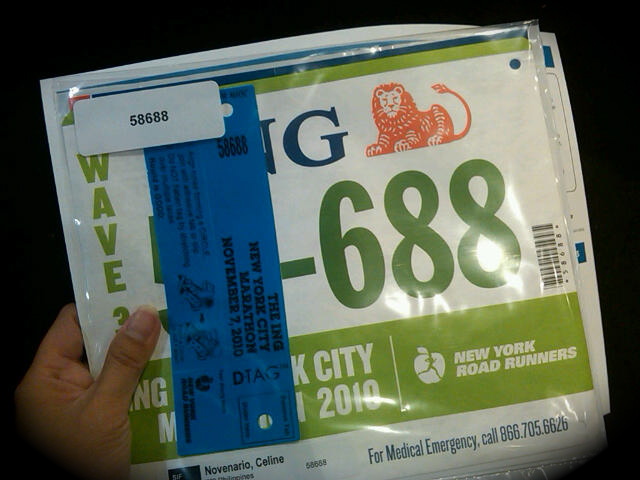 After getting my bib, I had my D-tag scanned and then got my heavy goody bag. The goody bag was pretty ho-hum, I thought. There was a bottle of Poland Spring water, a bottle of Gatorade, some kettle corn chips and nuts, and random little sponsor-logo'd knickknacks. The Asics-sponsored shirts were pretty nice though. It was a good thing I came on the first day of the expo because I was able to snag an XS shirt. I like the design: gray, long-sleeved and made with tech fabric. I know it'll go into my regular rotation of running clothes, especially this winter. 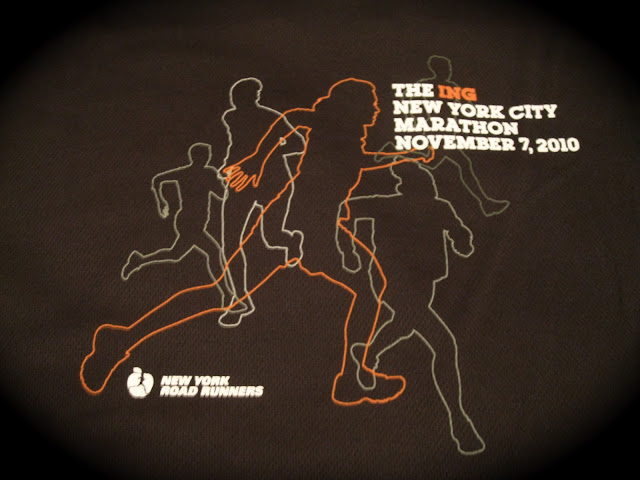 The Asics area in the expo is MASSIVE. I must've wandered around it for half an hour, checking out all the marathon branded stuff. I bought a pair of Nimbus socks since I ended up with a blister on my 20-mile run using my regular cotton running socks. Hopefully this pair will work better. I also got a skullcap for this Sunday and for winter running. I thought about buying a tech shirt there too but wasn't keen on the designs and decided my freebie shirt was good enough. I momentarily thought about getting these running gloves with all 5 boroughs on it but decided to reign in my inner shoppaholic. 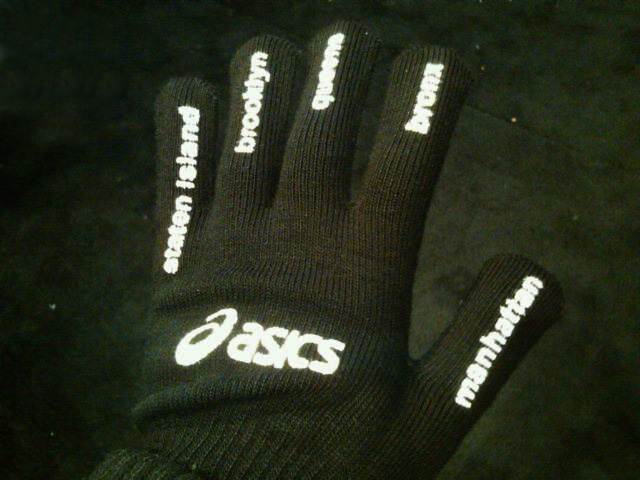 Once I hit the other booths, though, my restraint faltered. I couldn't resist getting this Adidas shirt, even though it's not even on tech fabric and I would never run with it. I'd wear this on any old day. I think it's a cute take on the classic "I ♥ NY" shirt. 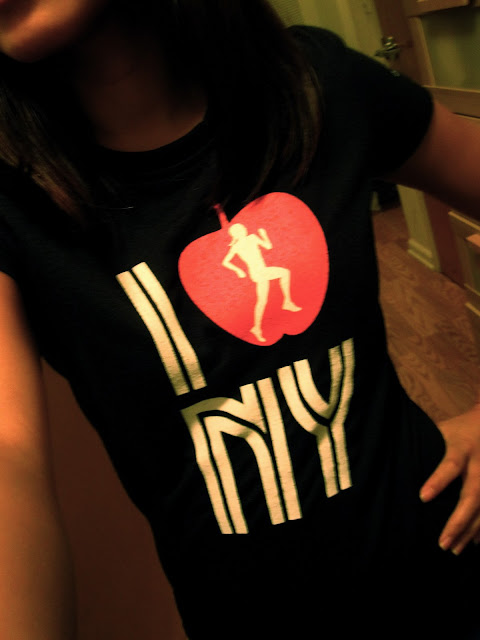 And then I got a few running essentials for Sunday. It's gonna be chilly but I know I don't respond well to being all covered up. So instead of getting a tech shirt, I opted for these arm warmers that I can just slip off and tuck into my running pouch if it gets too warm. Cute little souvenir too, don't you think? 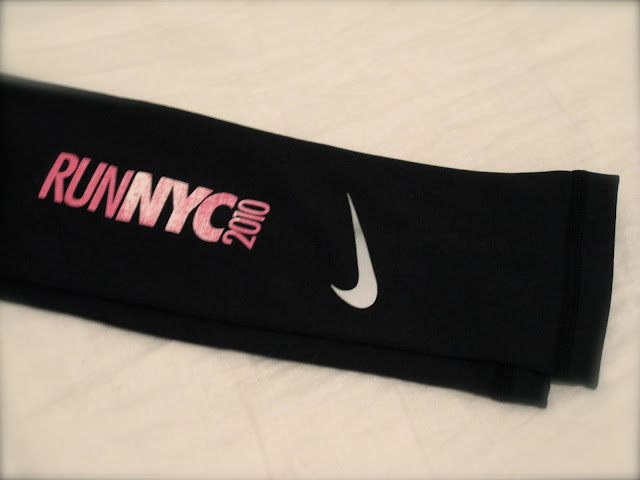 I hope I this won't bite me in the butt later on, but I'm thinking of switching from GU chomps to Power Bar Energy Gel Blasts for the marathon. I had some at the expo yesterday and they were soooo yummy! They taste like Haribo gummy candy and they don't stick to the teeth like the GU chomps. I picked non-caffeinated ones to minimize the possibility of having stomach issues. 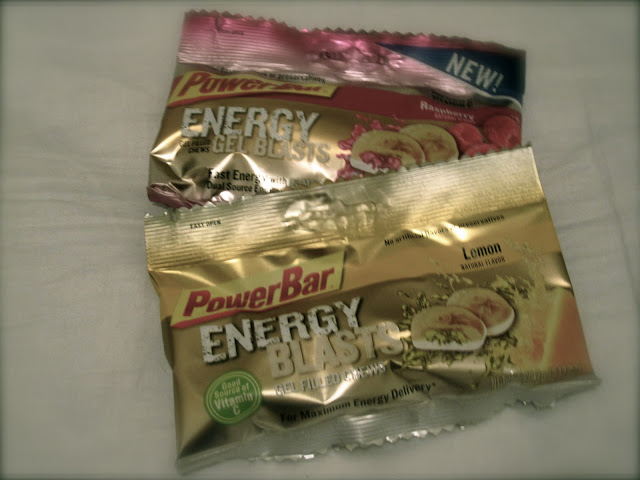 After that I decided to end my debit card's mini marathon through the expo. Our work there was done. I loved the text on this North Face t-shirt but decided I could live with just a picture of it. 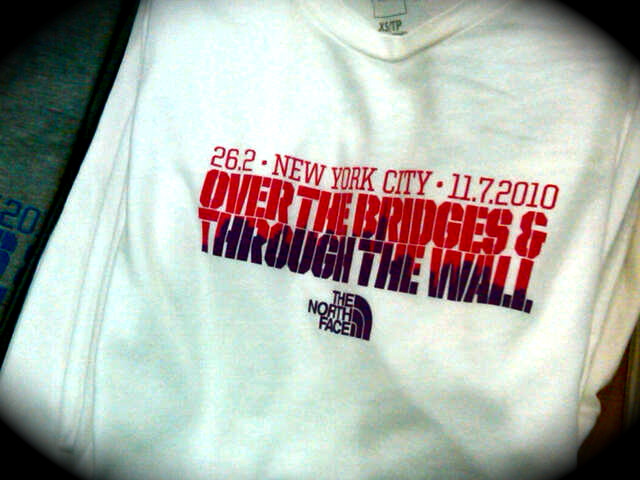 Two more days! It's been heartwarming to get emails and messages from friends who are going to be watching on various street corners to show the runners some love. If you're going to be on the streets of New York cheering the runners on, please snap a picture and email it to me for the blog.
See you on the streets on Sunday!
Posted by Celine | 30 Before 30 at Friday, November 05, 2010