Countless times on this 30 Before 30 Project, I set out to chase one experience only to get completely floored by another. Zoe and I had journeyed to Mexico to marvel at the Mayan ruins. But in the end, what truly took our breath away was our encounter with Il-Kil and the Sagrado Cenote Azul. 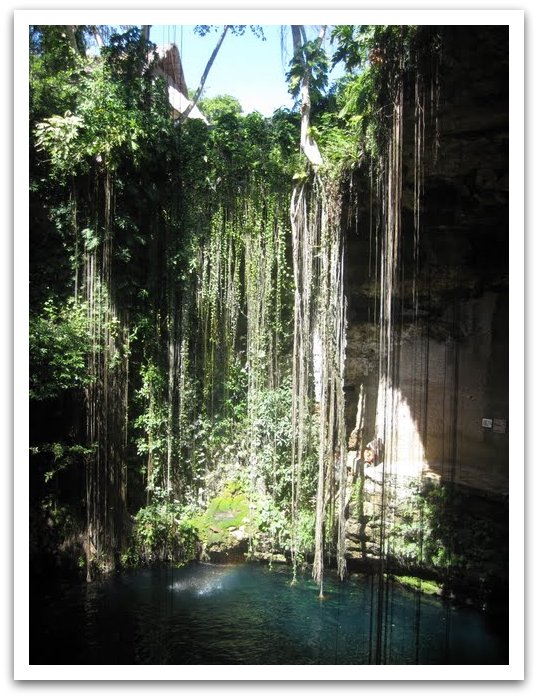 Cenotes are surface connections to the subterranean rivers that run underneath the limestone bed that is the Yucatan Peninsula. To the ancient Mayans, some cenotes were sacred and used for ritual offerings while others served as vital water sources. Accounts vary on whether the cenote at Il-Kil was used by the Mayans for relaxation, for ritual sacrifices or both, and I'd frankly rather not delve too deeply.  All I know is that today, visitors to Il-Kil are allowed to swim in the ink blue waters of Sagrada Cenote Azul and this pleasure is worth every single one of those 70 pesos.

Il-Kil is a far too easy 2.5 kilometer drive from the entrance of Chichén Itzá for the treasure that it holds. The Sagrada Cenote Azul is an imposing limestone sinkhole measuring 60 meters in diameter and 40 meters in depth, with an additional 26 meters from the surface of the water to that mysterious underbelly. The jagged limestone edges are fringed with lush vegetation. Fresh water drips relentlessly down the thick tree roots that hang from the mouth of the cenote down into the turquoise well below.  The water is unimaginably blue. The sight of it took my breath away.
It was upon reaching Il-Kil that we realized that the decision to skip the tours and go on our own  was undoubtedly a good one. There were no crowds when we arrived and we had the chance to enjoy the serene beauty of this Mayan treasure. We changed into our swimsuits in the dressing room, rinsed our sunscreen off at the outdoor shower, and descended into the cenote.
Swimming is not one of my strongest suits so I have to admit that I was intimidated by the thought of jumping into this 26-meter deep sinkhole. Have I already mentioned how much sinkholes creep me out? What if the Mayan gods had a taste for Asian sacrifices that had yet to be satisfied? 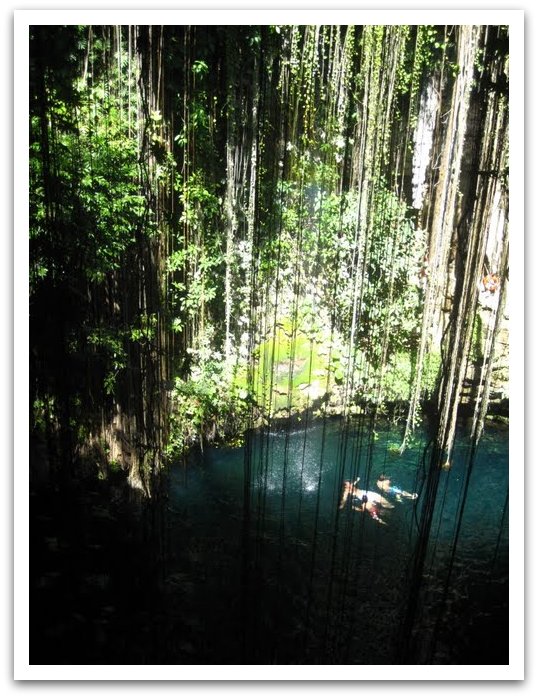 But as soon as my body sank into those deep blue waters and I felt myself enveloped by the peace of this ancient cenote, all apprehension evaporated and only bliss remained. Out in the water, it was as if nothing else existed but us, those impossibly blue waters and a few fishes swimming under the surface. Zoe and I swam out into a small patch where sunlight had broken through and a small rainbow formed under a spray of water. It's a moment that couldn't have lasted for more than a few minutes but it will forever be etched in my mind.

By the time we were out of the water and collecting our things, the crowd in the cenote had tripled in size and we realized how lucky we were to have had that moment of peace. We left Il-Kil completely revived, as if we had just started an entirely new day.