I really shouldn't stay on on the Internet too long. When I run out of people to stalk on Facebook (whoops busted) and my minute attention span short-circuits on this DMV manual that I've been attempting to study, I start doing silly things. In an effort to better my sh*te Spanish, I thought it might be a good idea to tell all my Spanish-speaking friends on Facebook to correspond with me solamente en español. And if that wasn't enough, I then decided to set my Facebook, Twitter and Gmail accounts to Spanish. 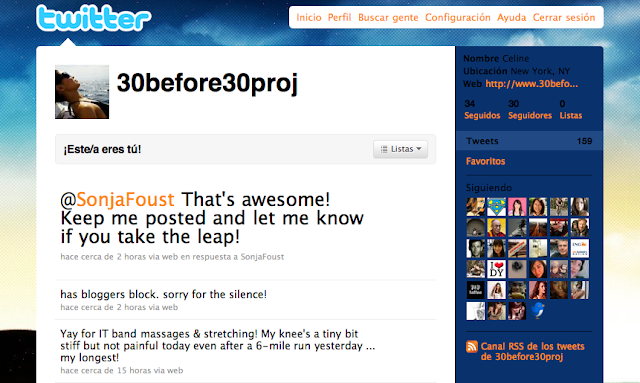 This is either really smart or really stupid.

But I realized a few days ago that for someone in level 4 Spanish, I am speaking and reading it mighty sh*ttily, so I have to step my game up. And it would be cool if I could get myself to converse somewhat in the language the next time I'm on Spanish soil. The last time I was in Spain, I recall getting a terrible headache from my attempts to turn away extremely persistent Madrileños who would not leave me alone. I kept having this conversation in a loop:

Over and over ... and over. Because I couldn't say anything more than that. Hopefully, this time around I'll be able to explain myself better. Although hopefully the attention will be welcome this time around porque esta chica soltera hoy en día. But til then, it's me and my Facebook and Twitter accounts communicating in Spanish.