Been There, Loved That: Drinie's Sagada Adventure 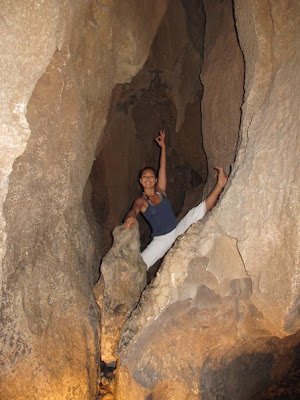 Meet my friend Drinie Aguilar, yogi and adventurer extraordinaire. We met over a decade ago at this kooky Manila society event called Manila's Five Loveliest. Drinie has always been one kick-ass girl who just inspires me with her adventurous spirit. She's done quite a few things on my to-do list, but today she's telling us about her experience spelunking the caves of Sagada. My interview with Drinie is super informative, for both Filipinos who are already familiar with this mystical place called Sagada and foreign readers who have probably never heard of it! Silly as I am, I thought that spelunking into a cave would be an easy task but according to Drinie it takes about 6 hours and lots of willpower to traverse these two underground caves of Sagada.  Read up and see why this is something worth busting your butt for at least once in your life ...
First, tell me what's going on with you! What have you been up to in terms of career, adventure, current goals? Where are you living now?

Since I started working I’ve been hosting and producing for television. My last stint brought me to Singapore to work for EPSN STAR Sports. Although sports and television are my interest, I want to follow something else that is closer to my heart – yoga. I was fortunate to find a teacher training that started the day after my last day at work (amazing how things work out like that). The teacher training turned out to be a significant turning point, sparking a stronger interest. It was the beginning of a whole year of training from workshops, conferences and classes around Asia and the US. I can’t stress how potent this time has been not only for self-discovery, but life-changing realizations. Upon taking another teacher training in Venice Beach, California with esteemed Vinyasa teacher, Shiva Rea in June 2009, I came up with the idea to stay longer. I’ve been based in Huntington Beach, California since. 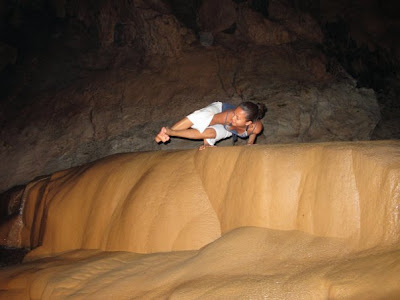 After a year of full yogic immersion I believe that it is my time to share what I’ve learned. Question is – where? After living away from home since 2001, except for a year in 2006, I am now more partial to the experience of living abroad, but there has been a pull to share this calling in Manila first. To help me decide, I’ve been back in Manila since to ‘test the waters.’ Since my return, I have been teaching every weekday in a lovely studio in the heart of the city called Bliss Yoga Manila. I am also holding my first yoga retreat at the beginning of May at The Farm in San Benito, Batangas as well as working on a few events that are centered around yoga. The two months are not over, but I already feel closer to making the decision to move back. The yoga community here in the Philippines is still young, as such there’s so much to share. California on the other hand, provides a lot of input and growth, but the market is already saturated. 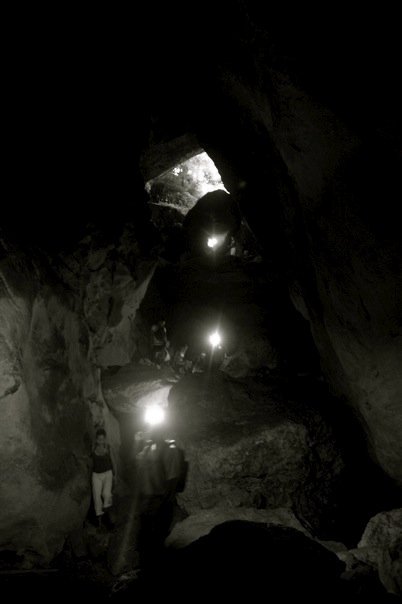 What made you decide to go to Sagada?

I visited Sagada last December 26-29, 2009 when I was back in the Philippines for the first time since moving to the US. The decision to go started with a chat I had with a friend. We were talking about how Sagada was on our go-to list for ages already. We both agreed that it was time to finally make it happen.
What was the planning process like?

My friend and I who thought about it started to invite our friends. He was the more excited one, which worked out well since he was on the ball as the ‘master planner.’ He booked our bus from Manila to Baguio, reserved accommodations in Sagada, and did research on the activities we could do there from the different waterfalls, spelunking and an annual bonfire with the local community – which was the perfect culmination of our trip.
Tell me about the journey to Sagada. How did you get there and who were you with?

That in itself was a journey alright. We left at midnight, the day after Christmas (going into the 26th). We got dropped off at the Pasay bus station and from there we took a bus ride to Baguio. We booked this in advance so we got the nice bus with reclining lazy boy seats. It was a sweet ride from midnight to 6 am. As soon as we got on the bus we had a bottle of wine, slept right after and before we knew it we were in Baguio. Easy.
Things were quite different from then on. We needed to transfer to another bus terminal for the trip up to Sagada. The bus ride up to Sagada was the total opposite of what we had just ridden – no [air conditioning] and single foldable seats in the middle row that were quite unstable for the bumpy ride (those were the only ones available when we arrived). That took another 6 hours, but the amazing views we saw on the way there was enough to distract us. We saw beautiful rice terraces and picturesque mountains. Meeting the indigenous people in the towns on the way there like Benguet was quite interesting too. We were six altogether in our group: 3 friends who were in the same batch in high school, my friend’s brother, and my other friend’s cousin. When we got to Sagada we saw another group we knew and we all started to hang out, which worked out well for the tours. 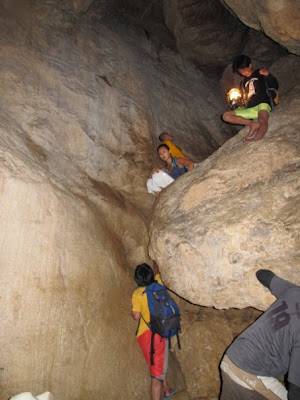 If you had to pick just one thing, what was your favorite thing about Sagada?

It has to be the beauty of unspoiled nature. Sagada is full of untouched natural beauty from waterfalls with fresh water, to the amazing caves, mountain views with lush pine trees and rice terraces. It’s a refreshing change from the city. I really believe everyone should make time to experience connecting with nature from time to time. People will be much calmer and nicer as a result if they do. I personally get concrete jungle fever staying in the city for so long, so it is a must for me. I must say, it does me wonders.
What was the spelunking experience like?
The spelunking experience was one that I will never forget. It took us a good 6 hours to finish the ‘cave connection’ tour, which is spelunking from Lumiang Cave to Sumaging Cave. As somebody who’s active I would rate it a 7 in the scale of 1-10, 10 being the most difficult.


We were about 12 in our group, and had 5 guides with us. The guides were so instrumental in getting across. If it weren’t for them we would not have been able to do it. There were parts where you had to use your upper body strength to pull on a rope to get you through tiny cracks. If not, the guides were there to provide their shoulders as ‘human elevators’– they bend down for you to step on them and then they stand up you can to climb up. There were also times where had to step on their stretched legs to get past rocky areas or use their feet as barriers from steep/slippery areas.
I guess what made it more difficult for our group was that fact that we came from the other most difficult tour, walking all the way down to see the Big Falls (Bomod-ok) just that morning. But in hindsight, from what we saw and experienced the exhaustion was worth it. In one day we trekked down a vast area of rice terraces to see a beautiful waterfall then in the afternoon spelunk through 2 challenging caves. It was an amazing day! 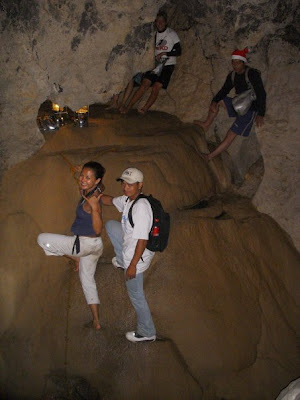 What was your favorite part of the experience?

As a thrill seeker, the element of danger excited me. So aside from seeing the amazing interiors of these caves from little pools of water, stalacitites/stalagmites, and hanging coffins which were a little eerie, it was exciting going through the obstacles of climbing through tiny cracks, passing through steep areas, and swimming through pools to get through.
Least favorite part?

The extremely cold waters! I’ve never experienced anything colder than that. The temperature really bites.
Would you do it again?
No doubt. That was the first time, but it definitely won’t be the last.

Any tips for other people (read: me) who would like to do it?

Plan ahead of time so that you have ample time to explore. A week would be perfect as it takes you about 15 hours for a one way trip to and from Manila.
Go with friends who are up for the adventure. Sagada is no doubt, for the adventurous. If you want to go there for that, invite friends who will be up for the same things you want to do.
Make friends with the locals. They are genuinely nice people who take pride in their land. They will be happy to tell you stories and take you around. 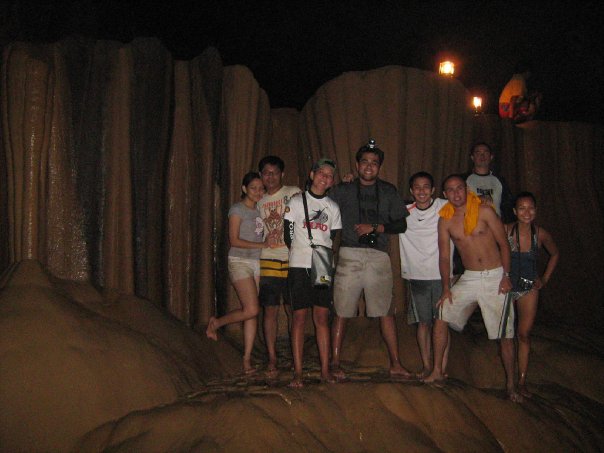 What's the next adventure for you?

Good question. There are so many things that I want to do. I’ve been wanting to go to Brazil for the longest time, but I think I’ll save that for the next World Cup. My last two trips to Bali have been magical for me. The lifestyle there is quite in sync with mine – a good yoga community, good surf, friendly people who are similar to the Filipinos and health conscious food. Since it is more accessible, another trip will be the next on my to-do list. My times there have been adventurous, and yet there is still so much to explore.
Top 5 things you're glad you've done? (in order of importance)
Top 5 things you still want to do? (in order of importance)
Thanks for sharing Drinie! We look forward to hearing more about where life will take you.

Labels: #16 go spelunking in sagada, been there loved that