It wasn't too long ago that I decided I would go cold turkey (pun unintended) on all forms of meat. It was a special blend of heaven and hell to go meatless for an entire month. Heaven because going vegetarian, coupled with daily Bikram yoga sessions, left me feeling light and clean, as if my blood was just smoothly flowing through every vein all the time. Hell because as anyone who knows me can attest, I devour meat as if I had a vendetta against it. I got reacquainted with my vegetarian self on Wednesday night, when I treated my friend Amanda to a long overdue birthday dinner at Dirt Candy. Amanda helped me through one of the most challenging months I've ever had by suggesting recipes and pointing me towards great vegetarian spots in the city. Dirt Candy, I have to say, is the best place vegetarian place I've been to. In fact let me rephrase that ... it's not just a great vegetarian restaurant but a great restaurant, period.
During my brief fling with vegetarianism, I would stare at menus sadly, settling for whatever vegetarian option seemed the least heinous. At Dirt Candy though, I found myself staring at the menu for ages in utter indecision because everything looked so good. Thankfully, Amanda helped me focus. She said that the jalapeno hush puppies ($6) were a must and she was right on the money 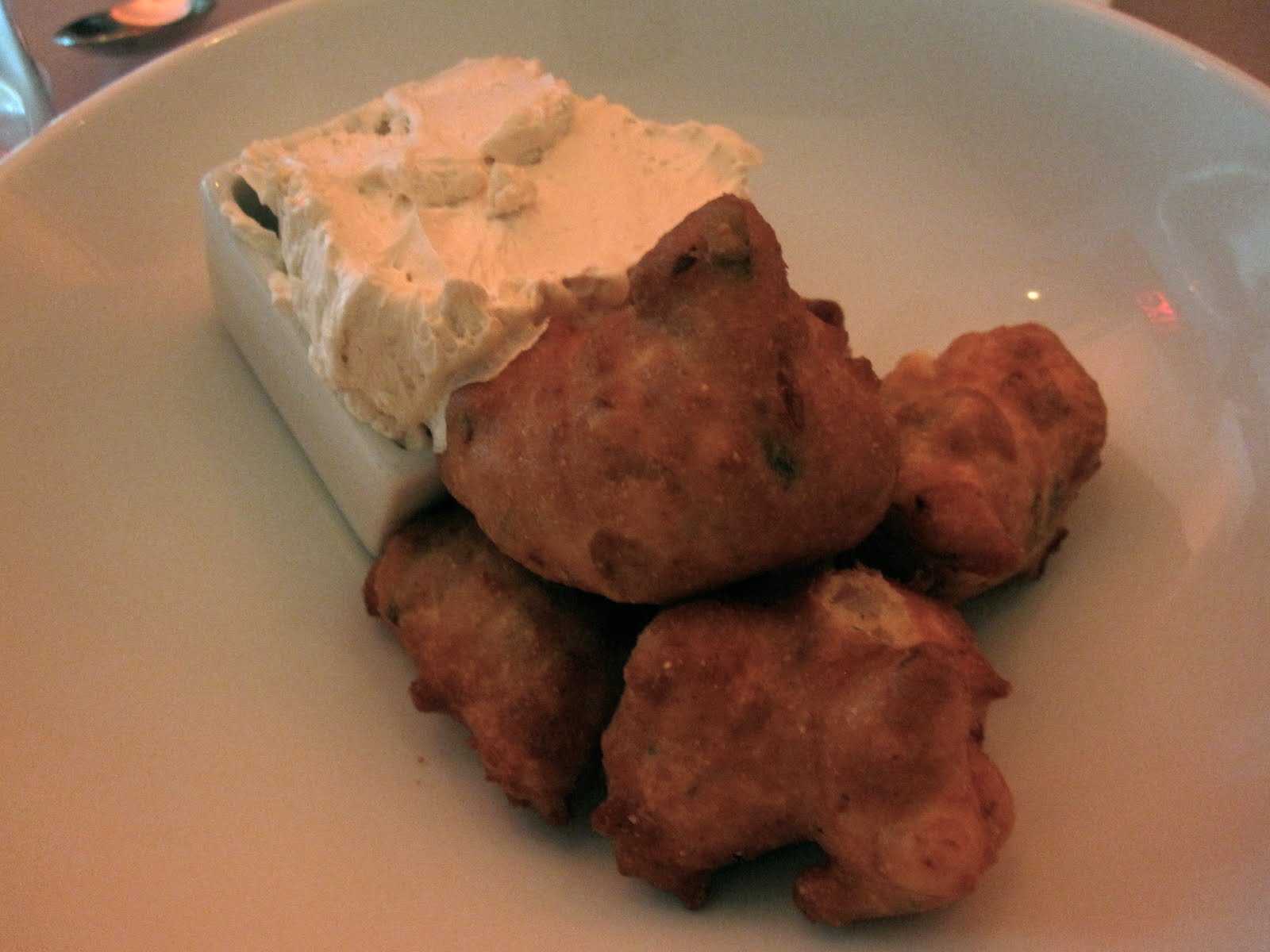 These fluffy little jalapeno-spiked puffs were served with the most heavenly whipped maple butter that I just wanted to take home, introduce to my parents, and grow old with. The butter melted into the still warm hush puppies, making each little puffball a sweet and zingy little snack. The waitress knew full well what effect this maple butter has because she left the little tub on the table after clearing the empty plate. That's called knowing your customer!
Next we shared the steamed barbeque carrot buns with cucumber and sesame ginger salad. The filling was nice and flavorful, and made you forget you were getting in a dose of vitamin C. I could have totally used these carrot buns that time we visited Ippudo, when I was left longingly watching my friends gobble up sweet white buns stuffed with unctuous slices of pork belly. While I still would not pick these carrot buns over an Ippudo pork bun, I might actually trade the pork for a massive serving of that cucumber salad. The refreshing flavors and contrasting textures of the julienned cucumber and its addictive, crunchy sesame halvah topping is something that I could eat for days. Such a great summer treat. 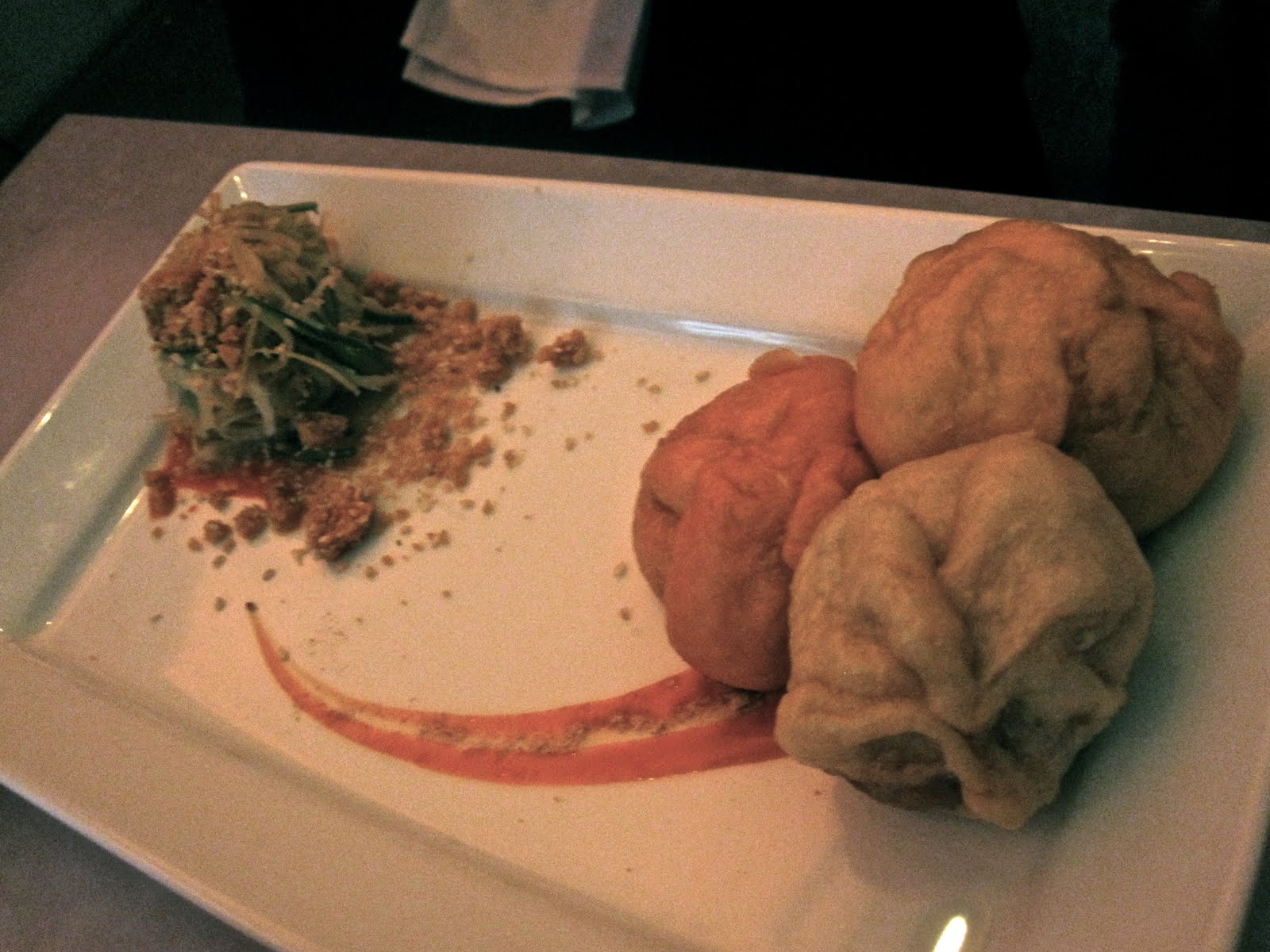 I had a tough time picking an entree with all the intriguing choices. I was so curious about the fried green tomatoes with toasted coconut, yellow tomato sauce and tomato spaetzle, which on hindsight I should've gone with since tomatoes are best eaten during the summer when they're in season. But since my mind's in carbo loading mode for the Bronx half marathon on Sunday, I went with the hearty corn entree—stone ground grits, corn cream, pickled shiitakes, huitlacoche and tempura poached egg. We were particularly mystified with the tempura poached egg. How does one tempura something so delicate as a poached egg? I later learned that Dirt Candy's chef Amanda Cohen does this using a deep fryer. Her philosophy is that vegetarian food can also be indulgent, and that definitely shows in this dish. I surely felt indulgent when I broke into that beautiful tempura poached egg and had a piece with the creamy corn and grits. Since I didn't grow up in the South or in the US, for that matter, grits remain a foreign concept to me and I haven't had a lot of memorable versions—until this dish. It's so hearty, flavorful and definitely incredibly filling. I could not even come close to finishing it, which is amazing since I have no problems putting away a 24-ounce steak. This definitely disproves the notion that eating at a vegetarian restaurant would leave one hungry. My only qualm with this dish is that I don't know how I feel about the huitlacoche, yet. It's a delicacy that chefs will give names like "Mexican truffle", but it's basically a fungus that grows on corn ears when they've been subjected to too much moisture. It has a strong and earthy flavor, and I think it's bit of an acquired taste ... and I clearly have not acquired it yet! I would definitely come back to have the dish that Amanda ordered: the zucchini—mint and tarragon pasta, squash blossom relish, yogurt & saffron sauce. I felt bad for not using the flash on this picture when I realized how amazing the colors of the dish were from the chef's blog post on it. But Dirt Candy is such a tiny and intimate restaurant that it seemed obnoxious to use flash. In any case, with the red-hued lighting, this actually was how the dish appeared to us. The creamy sauce is made of labneh, a tangy yogurt that almost tastes citrusy—a flavor that paired well with the zucchini noodles and shredded fresh zucchini. The chef threw in pickled squash blossoms in keeping with her philosophy that every part of the vegetable should be used. And since pasta and meatballs are a classic pairing, she threw in some small falafel "meatballs"—such a clever little touch. I recommend reading chef Amanda's post on this dish because it really makes you appreciate all the thought that she put into creating it. 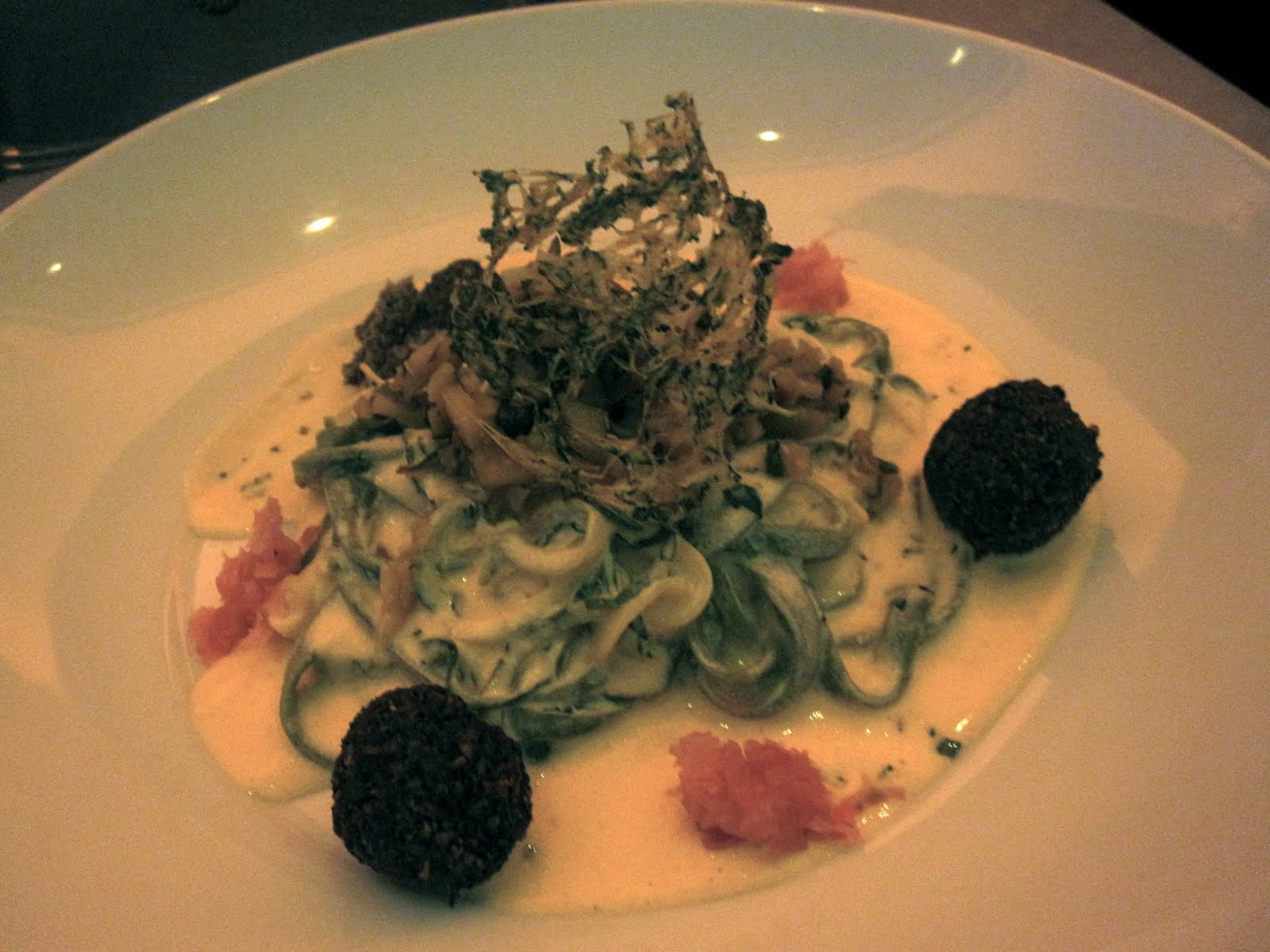 A lot of people (myself included) ask what I got out of that one month of vegetarianism, and I think the answer is that it allowed me to look at food in a new dimension. I learned to looked at food as fuel and see it for what it does to the body. But it also opened my mind up to trying new things. God knows I would never have gone to Dirt Candy if I hadn't had that fling with vegetarianism, and that would've been sad. Dirt Candy's food showed me how inventive and indulgent vegetables can be in the right hands. I have to say, I'm glad to finally have a place to bring my vegetarian friends that I'll also actually look forward to revisiting.