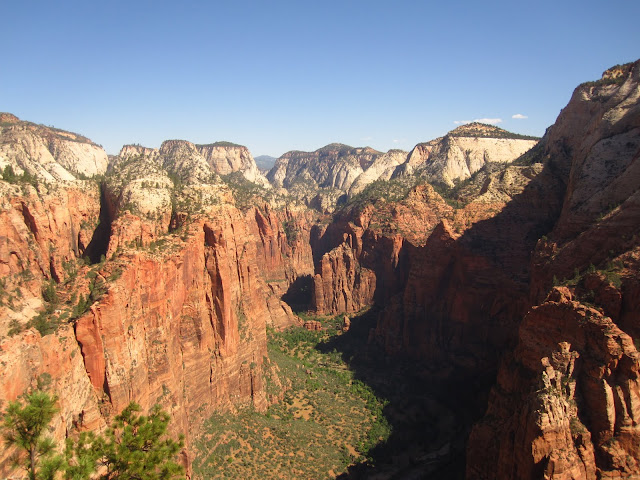 "The fact that they had to put chains on Angel's Landing (and that a woman fell off in April) intimidates me a bit," I replied when my friend Buck suggested hiking this trail in Zion.


"And in other news, someone died walking around New York earlier this year too," he countered.


And so it was that on Day 2 of our road trip, Kate and I set out to tackle Angel's Landing bright and early. We were well rested since we all but passed out soon after arriving at Zion the night before. We filled our tummies with a light breakfast of cereal and each of our bags with 2 bottles of water, a banana, a granola bar, baguette and hummus (park authorities recommend bringing a gallon of water but that weighs almost as much as I do so I went with 14 fluid ounces). We hopped on the free shuttle at the visitor's center, which would take us to The Grotto, where the trailhead to the West Rim trail and Angel's Landing begins. We started off on the path, which starts out gently sloping and then steadily increases in steepness. A large part of this leg was mercifully in the shade since we set out before 9; by the time we headed down at noon, the path was baking in full sun and quite torturous. 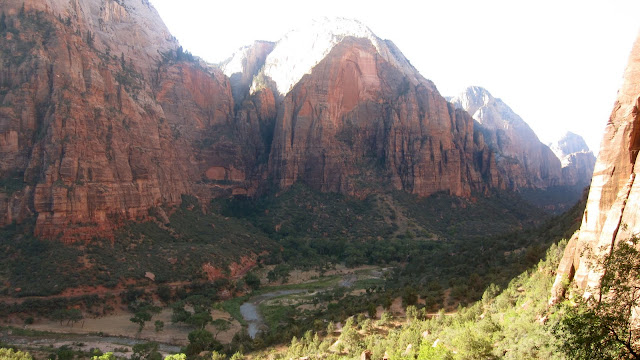 A wonderfully cool reprieve came when we reached Refrigerator Canyon, so called because of the low temperatures afforded in this gap between Cathedral Mountain and Angel's Landing. Here you get a chance to enjoy the verdant green of the plantlife and the rich oranges of the canyon walls as you soak in the cool air. It's a good way to recharge for the next portion of the hike: Walter's Wiggles. 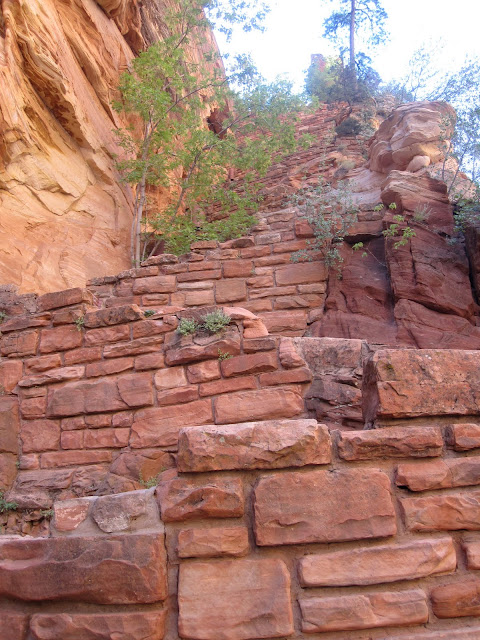 These steep switchbacks will take your breath away in more ways than one. The series of 21 zigzagging paths is an impressive engineering feat, considering it was cut out of canyon rock back in 1926. It will leave you huffing and puffing from gaining 250 feet in elevation quite rapidly, when you're already at an altitude of 4290 feet above sea level. Once you get to the end of the switchbacks and see the gorgeous view that awaits, however, it's easy to forget the effort just expended.


"Is this it? Have we made it to Angel's Landing?" I asked excitedly as we walked out on the clearing and stared out at the white capped canyons. My excitement gave way to a churning in my stomach when I saw the answer to my question rising up in front of me ... 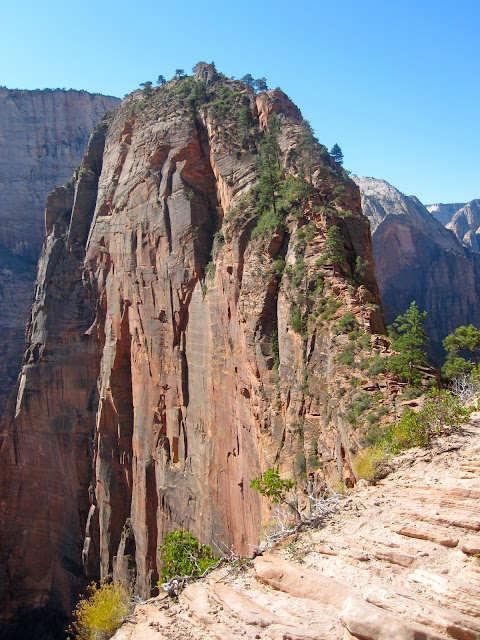 The slender fin that is Angel's Landing is an intimidating sight. From Scout's Lookout, you can see people scaling what seems like an impossibly thin piece of rock with nothing but air surrounding it. It's a 1200-foot drop on one side and an 800-foot drop on the other. It's at this point that you see most hikers turning back, preferring to rest their tushes safely on Scout's Landing instead.

"Let's do it," Kate said. Thankfully, it seems my hiking impulses are a lot like my drinking impulses: you just have to ask me once and I'll say yes, no arm twisting required. We went on to tackle Angel's Landing trail, clinging to the chains bolted to the sides of the cliff and clambering over boulders. 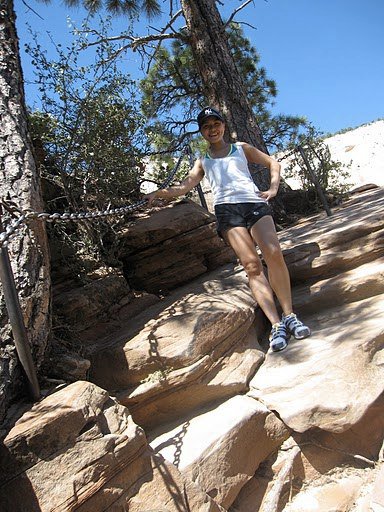 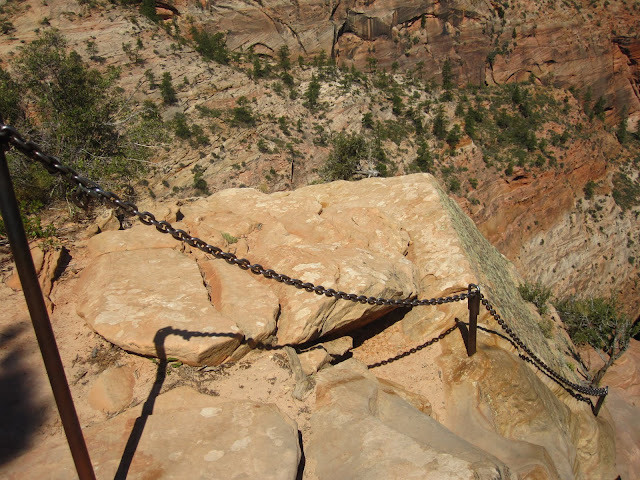 The hike is made a little less stressful by the hikers you meet along the way, who are incredibly polite (since no one's in a rush) and quite funny (since you have to keep your sanity somehow when you're doing something quite nuts). "I should warn you," said a man ahead of me while we were clambering up a particularly tricky section. "You're wearing a Yankees hat while hiking behind a Red Sox fan. These are very steep cliffs, you know." 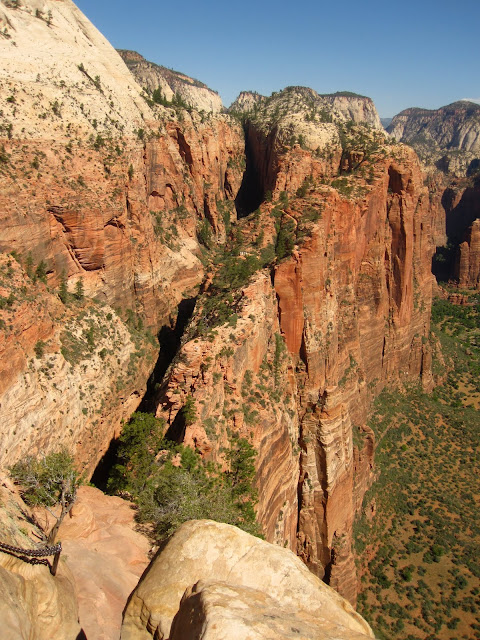 For most of the hike, I concentrated on the task at hand, only thinking about where to put my foot next and trying not to dwell on the height of the drop. It can get to you if you let it; there are sections when all you can do is hang on to the chain while you cross a significant gap between rocks. And then there are portions where there simply is no chain, just planes of rock that seem quite easy to slip from (naturally, such portions are usually accompanied by sheer drops on both sides). It made my heart skip a beat at times, but we kept on trucking on and finally we found ourselves on that landing that the explorer Frederick Fisher first gazed at in 1916 and declared, "Only an angel could land on it." 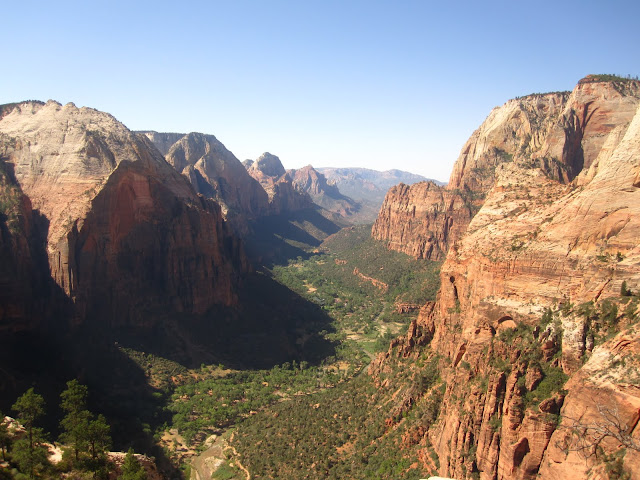 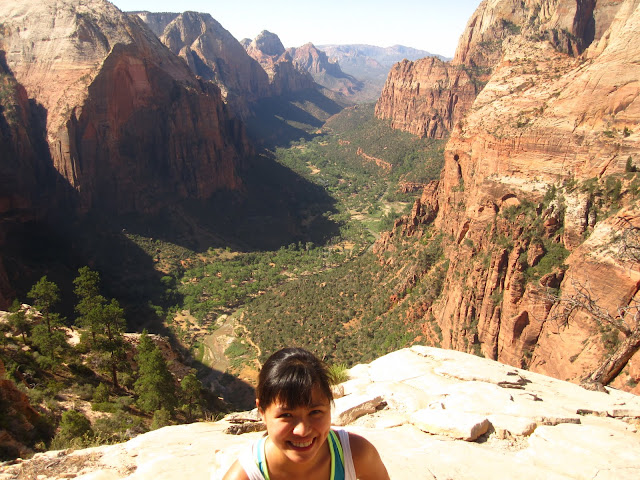 We walked on to the end of the landing and stared at the marvelous view before settling under a tree to have a few snacks. My banana was completely battered and our granola bars had melted into sticky blobs, but one can't be picky whilst 1200 feet away from the ground.

After eating and snapping more photos, we negotiated our way down the trail carefully, as gravity was now pulling on us, making a misstep all the more dangerous. Once we were off Angel's Landing's fin, the hike was easy peasy. The heat, however, became extremely punishing. We decided to conserve our energy for the rest of the trip and spent the rest of the day lounging at our campsite, having Modelo Negras, veggie burgers and fire-roasted corn topped with cheese and chili flakes, as Watchman stood guard. 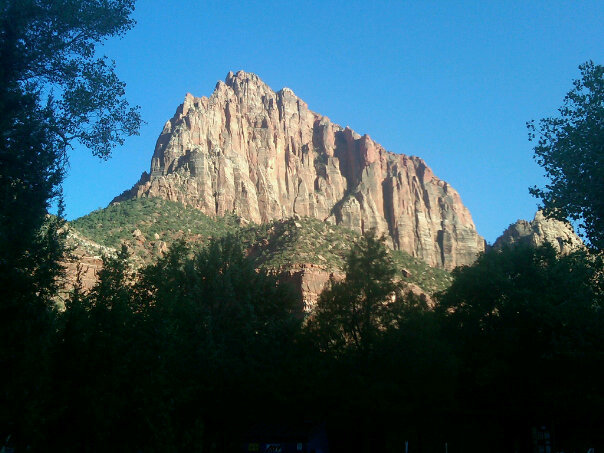 A great use of a day on the road, I would say.