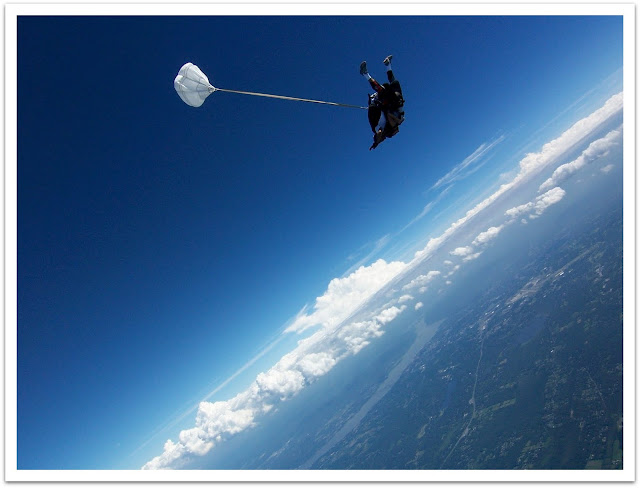 It was absolutely, positively one of the most incredible experiences of my life. My jaw still drops in disbelief at the thought that I jumped out of a plane today at 14,000 feet.

Gina, Fiel, Monica and I set out for the 2-hour drive at 10:30AM. I felt a little bad for Fiel who had to put up with the nervous chatter of three women from Manhattan all the way to Gardiner. After stopping for a quick lunch, we headed for The Ranch, where the temperature was steaming hot, the grass was nice and green, and the blue skies above were dotted with parachutes. My nervousness dissipated upon seeing the colorful parachutes floating gracefully to the grass. But it flared up again as we essentially signed away our lives with the waiver that had stipulations like "I understand that I can die" for us to initial. Once we started getting ground training from real live human beings though, I felt a little more calm. 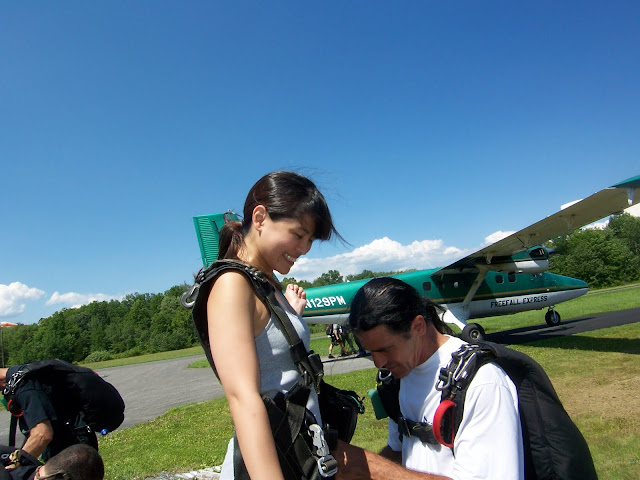 My instructor was Jorge, a.k.a. Antonio Banderas. He's originally from Columbia and like the rest of the instructors, has a wicked sense of humor. Carolyn, who briefed us earlier on safety procedures, told us that the instructors have upwards of 10,000 skydives each under their belt (I blank on the exact numbers she gave because as you can understand, my priority at the time was focusing on not making a run for it). So when I met Jorge, I asked him, "How many jumps have you done?" With a straight face he said, "Yours will be my second. After your jump I get my certification." Another instructor joked around with our married friends Fiel and Gina. Fiel told him that Gina gets everything if anything happens to him, at which the instructor turns to Gina and says, "Let's talk later. We can work something out."

Oh, and let's not forget the priceless gem of the day:

Jorge: So this was your idea?
Me: Yeah.
Jorge: What made you think of it?
Me: Well I have this list of 30 things to do before I turn 30 next year, and skydiving is on it.
Jorge: You should add me to that list.

My jaw dropped and then I burst out laughing, but as shocked as I was, it was a nice reprieve from being flat-out petrified. Only a charming Latin man responsible for keeping me alive during a 14,000-foot skydive can get away with a cheeky line like that.

Before we knew it, we were rushing to the runway, getting our harnesses tightened up, and climbing into the 20-seater Twin Otter aircraft charmingly labeled Freefall Express. It all happened so fast that there was really no time to think about backing out. I just found myself seated on the floor of the plane right by the door, and we were taking off. 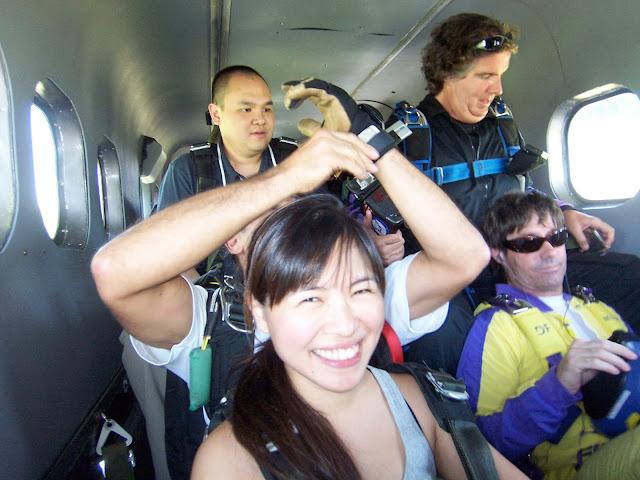 As you can tell from the massive grin on my face above, I was giddy with excitement during the whole plane ride. I was afraid I'd be whimpering on the floor in tears, but I was grinning like a fool the whole time. Okay, maybe being crammed in next to a hot West Point Black Knight skydiver may have had something to do with it. And it was helpful too that I had this Antonio Banderas doppelganger proffering some very Zen thoughts like, "Remember, this is a beautiful, once in a lifetime experience. Don't be scared. Make sure you enjoy it." Plus, there's always the one-woman comedy show that is my brain, where this thought process somehow brewed: "Hmm ... why did I wear leggings today? They're comfy and all, but what if I get some crazy camel toe while skydiving? Oh my god, how mortifying would it be if every single picture of my skydive shows a massive camel toe?! What a waste of $99!" Yes, this is what goes on in my head when I'm put in a life threatening situation.

And then, just like that, we were at 14,000 feet and all the advanced skydivers seated in front of me started methodically dropping out of the plane. See ya! 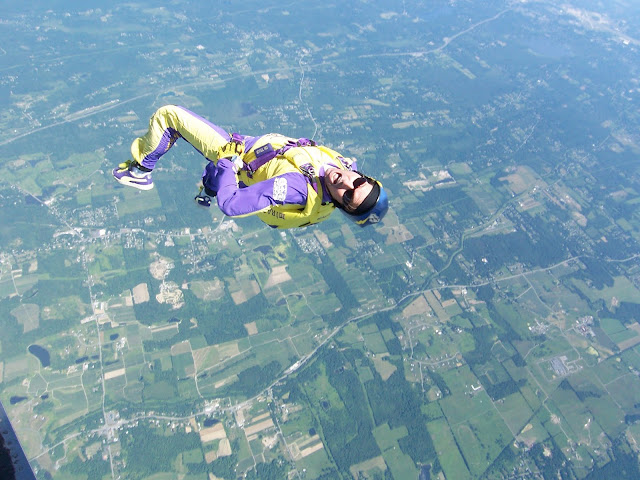 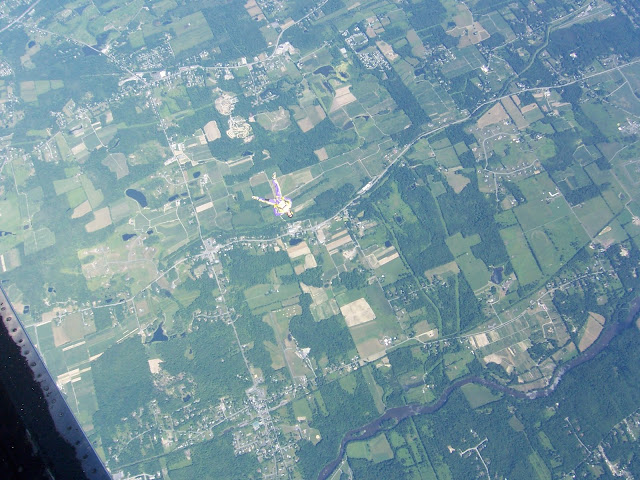 I knew I was gonna be the first of our group to jump since I was seated right by the door so I decided I wasn't gonna do much thinking and just go with the flow. I followed Jorge's instructions to stand up, walk to the door of the aircraft, and like we practiced rock once, twice, and ... 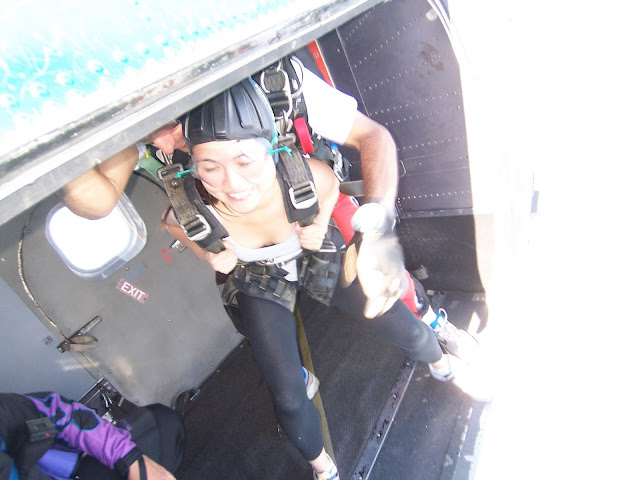 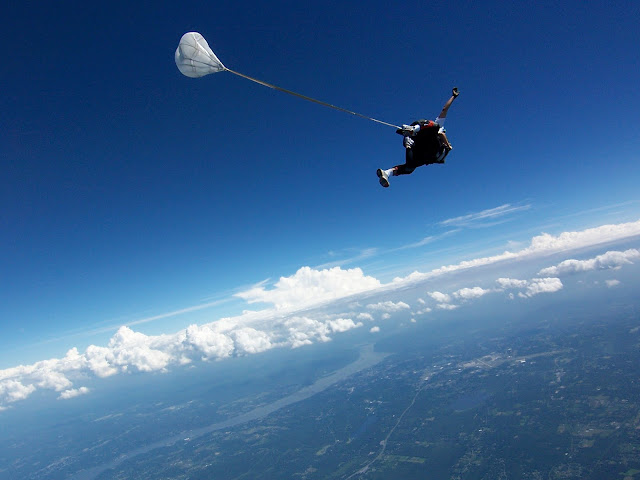 The first few seconds of free fall was like an out of body experience. I felt no panic, no fear. I didn't even scream. I was in a trance really, stuck in a looping mantra of, "Oh my god, this is unbelievable." It didn't feel like I was falling at all. The wind whips at you with a force you've never felt before, but you feel like you're just suspended in the air. At some point, I finally woke up to the fact that I was actually doing this. I was skydiving! And at that realization I had to let out some whoops of excitement. 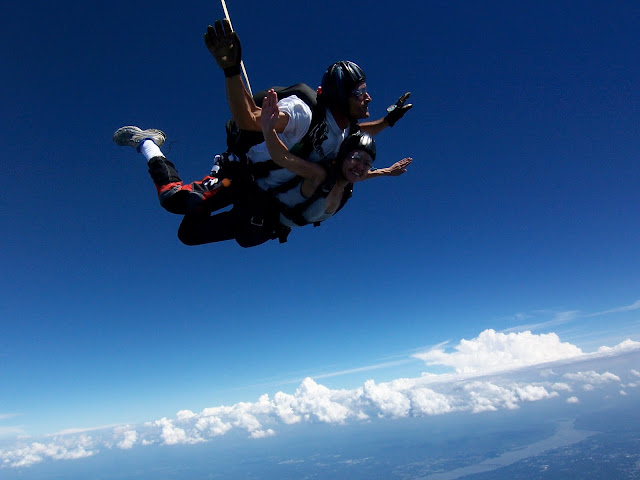 As crazy as all of this already was, the most surreal moment for me was to have the videographer, Laszlo, swoop in really close to us to take pictures and footage. It's amazing and all to have a video and photos of this experience (the video is actually pretty cool, not cheesy), but being able to interact with another free-falling person during the dive was also an amazing experience. He was so close I could've reached out and touched him. These guys were phenomenal. I told Jorge, "You have the most incredible job in the world." He agreed. 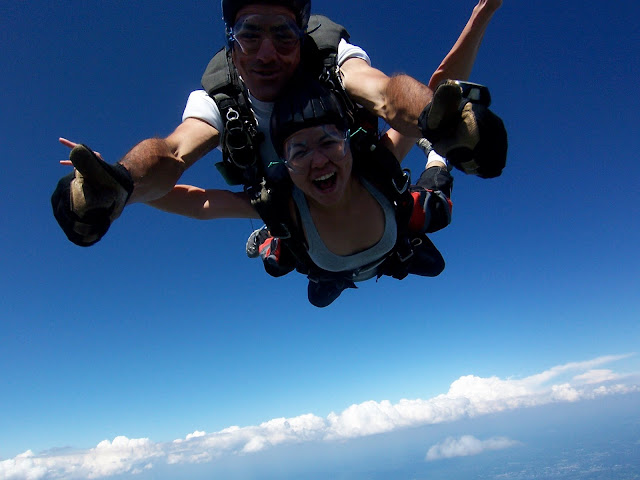 It felt like a good period of time before we hit 6,000 feet. At this point, Jorge moved my hands to do the "baby wave," the signal to other jumpers that we were about to open up our parachute. During the briefing I thought my mind would go completely blank during the jump and I wouldn't be able to do squat. But I was actually sufficiently focused and managed to pull the ripcord as instructed. With a whoosh, the parachute opened, we slowed down, and everything fell completely silent and peaceful.

"You should take this moment to say thanks to whoever it is you worship for this gift," Jorge said.
"Absolutely," I replied.

He pointed out the mountains in the distance, the streams below, the fluffy clouds above, and the impossibly blue sky we were floating in. Then he asked if I wanted to help steer the parachute and do some turns, which I actually did. It was pretty fun to spin around in the air, though I have to admit that after awhile I had to concentrate hard on not getting completely dizzy. It must have taken just minutes for all of this to happen, but it felt like a wonderfully long time of just flying. Absolute bliss.

Finally, Jorge had me practice the landing, and seconds later, my tush was safely on the grass. 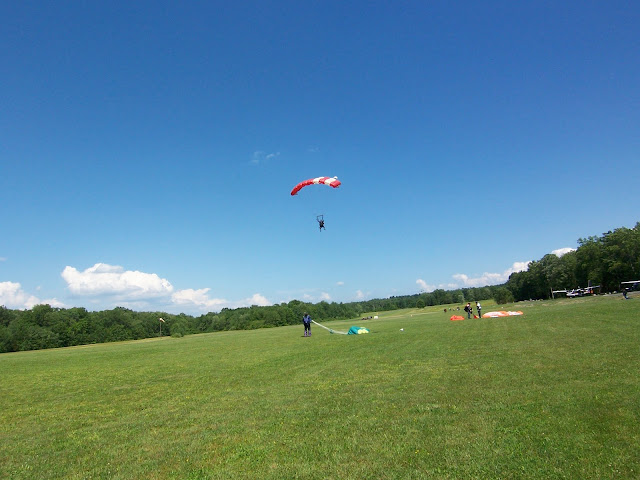 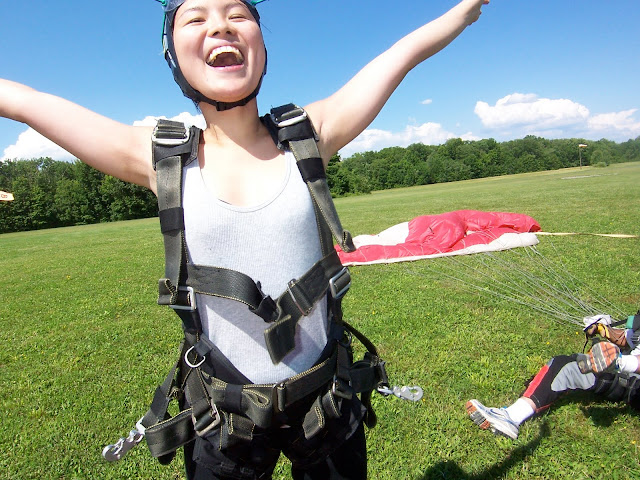 Soon after, my friends landed one by one, and we all rejoiced in the fact that we had done this absolutely crazy thing, and came out of it in one piece. We were flushed with adrenaline during the skydive and after hitting the ground. But on the ride home, our bodies started to feel the effect of the craziness we had put it through. There were moments of feeling nauseous that we attributed to all those turns we did on the parachutes. And quite frankly, I am exhausted from the stress and excitement of it all. But as I write this entry and rehash the amazing experience, I feel all warm and fuzzy inside, with the satisfaction of knowing that I did something truly amazing today. And I will treasure the memory of it for the rest of my life.