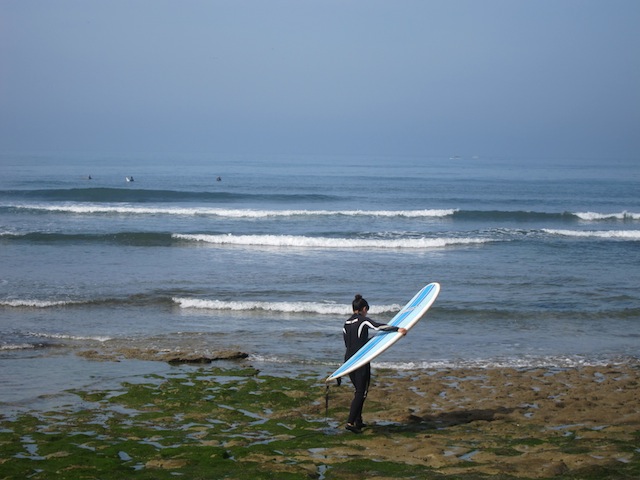 For as long as I can remember, I've been told that I'm hard-headed. I prefer to believe that if we were to ask Jane Austen, she would say I'm "strong-willed." Hard-headed's a pretty good word to describe me though. When I have my mind set on doing something, it's next to impossible to dissuade me.
On my fourth day at Ribeira Surf Camp, however, I learned that I am hard-headed in the literal sense as well. It was a rough day in the ocean for me. During our morning lesson, the opening salvo was a direct collision between another student's board and my left cheek when we were both pushed on to the same wave. The afternoon session started with my board bumping my nose as I swam under a big wave that almost broke over me. The grand finale was my board hitting the top of my head with an impressive thump after I wiped out on my last wave. I didn't break or bleed at all though, which is how I've come to the conclusion that I am indeed hard-headed. I got a nice little bump on my head from the last incident but nothing a cold compress couldn't fix. The only permanent impressions made by the accidents were that:
In between my throwdowns with surfboards, I had the gift of getting to ride some great waves. It didn't seem like it was going to be that way at first. After the initial smackdown with another student's surfboard, nothing much happened. The water was so flat that Rolf started attempting handstands on his surfboard to keep entertained. The waves that I did get, I didn't do such a good job of riding. The afternoon session didn't seem promising either. I woke up from my siesta to find a thick fog hanging over Ribeira d'Ilhas and was convinced the lesson would be cancelled. But in we went, with one instructor responsible for five students and what seemed like just 10 to 15 feet of visibility. I had this nagging voice in my head that kept saying, "If you get knocked out unconscious, they will never find you in this fog." But it actually ended up being one of my best sessions. I finally learned how to cope with the big waves when they came and learned where the calmer parts of the water were where I should paddle through. I found spots outside to rest while waiting for my turn where it was less likely for waves to break and tumble me towards the shore. And I was reassured when, the one time I took longer than usual gettting back outside (due to riding a big wave, losing a shoe, finding it but not having time to put it on, and then having to paddle back outside while balancing a shoe precariously on the board), our instructor Alex immediately noticed my absence and called out for me.
Feeling more confident in my ability to paddle out made my afternoon session a lot better. I surfed a lot of good waves and enjoyed the experience more after getting the hang of paddling. It was such a great session to end my stint at Ribeira Surf Camp. 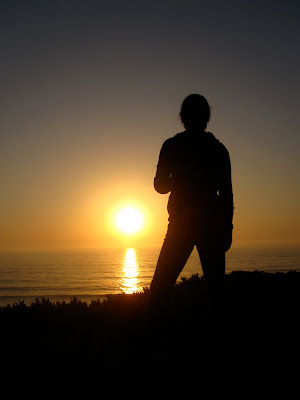 My last night at the surf camp was a quiet one. Tiago treated Rolf, David and I to some Sagres and showed us pictures of sick waves he's caught around Ericeira and other parts of Portugal during winter, when the waves can reach intimidating heights. We finished our beers underneath the stars at the bar's second floor overlooking Ribeira d'Ilhas. It was the perfect nightcap to an awesome day of surfing.
It still astounds me how amazing this surf camp leg turned out when it was pretty much a shot in the dark for me. I'd only found the place through the recommendation of a complete stranger and decided to go for it on blind faith. And yet it all turned out brilliantly. I've met so many fun, interesting and genuine people, and I know that some us will stay in touch and reunite somewhere, somehow in the world. I couldn't have imagined having a better time. And I can't wait for the next opportunity to surf again.

Pictures courtesy of Melli Geh and Magdalena Schwertl
Posted by Celine | 30 Before 30 at Tuesday, October 05, 2010