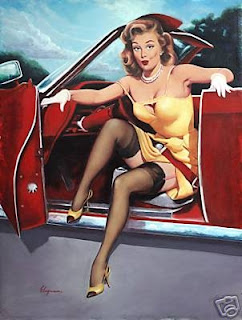 Over the last few months I've jumped off a plane, hiked on a sheer cliff with a 1,200-foot drop, been flung around the Atlantic Ocean in my attempt to surf, and gone from zero to 20-mile runs to train for the New York Marathon. But nothing literally made my knees shake like today's challenge: taking another shot at getting my New York State driver's license.
My first try was a miserable, cringe-inducing flop that brought my self-esteem down a few pegs. Before this test, I thought of myself as a pretty decent driver. I drove practically everyday for over 10 years while I was still living in Manila—and none of this automatic transmission nonsense. I drove a stick shift, thank you very much. So I thought I could pass without much trouble. But instead, I failed miserably without too much effort on my part, and the dressing down that I got from that examiner made me feel about 5 feet smaller (which does in fact only leave me with one inch).

In an ideal world, I would've spent the two months until my next test date practicing diligently. But real life is a lot more complicated than that, and I just couldn't find the time what with moving apartments, marathon training, trying not to drown in a deluge of work, my ongoing pitiful attempt to learn Español, and catching up with friends flooding my schedule. So when I went to take my test this morning, I was scared to death. I didn't practice at all and had done nothing in the past months to hammer the habits of turning my head to look and signaling into my psyche. So demoralized was I that I decided I was sick of this bullcrap, and if I didn't pass this time, I just didn't want the damn thing anymore.

I was a nervous wreck when I met my instructor Rey from Professional Driving School of the Americas at Madison Park. There was another student coming with us today, a Frenchman named Nicolas. Rey asked me if I wanted to drive to Staten Island. "He can drive," I replied. I just wanted to relax and thought it might be better for me to hear the instructions being given to someone else before having a go myself. So I sat in the backseat as we all shared stories on road trips we've taken, and listened closely as Rey gave Nicolas a simulation of the test. I think it helped me to absorb the instructions without worrying about driving at the same time.

When I finally got behind the wheel, it seemed I had finally gotten the hang of signaling and looking left, right and back ad nauseum. The trauma of the first test was apparently enough to get it into my stubborn little head. At last, I got the right instructions on what on earth to do with those darn stop signs ("Make a full stop. If there are no cars, you can slowly crawl to see if any cars are coming. If there aren't, you can go ahead." This makes much more sense than that two stops blabber). My parallel parking was not perfect, but Rey didn't insist on perfection: "You can fix it if it's not perfect. You just need to show that you can park. Just relax and take your time."

My driving alter ego Cher Horowitz did attempt to make a comeback though. I found that I turn into Cher once I make a mistake and I get told off. I guess I've just always been a teacher's pet, and I get a mini-meltdown when I'm told that I missed something. From there I just go on a path of self-destruction. I start driving too fast. I blow past stop signs. It was so bad that at one point, I turned on my signal light to make a right turn but kept going straight. My instructor looked at me like I had gone Exorcist right in the car.

"Pull over," he said. "Turn everything off and let's start all over again."

I took a moment to calm down and reboot. We did the simulation all over again, and this time I mentally locked up Cher in her walk-in closet with a black AMEX, Net-a-porter and Wifi. I drove calmly and carefully. I was good to go.

We drove to the test site and before I knew it, it was our turn.

"Do you want to go first?" Nicolas asked.

"Noooo go ahead, please go first," I told him.

Just as the examiner was walking up to us, Rey suddenly says, "You guys don't get to choose who goes first. She does." And wouldn't you know it. Of course the examiner picks me. Before I get a chance to freak out, I am seated, putting on my seatbelts, and adjusting the mirrors.

I have a different examiner this time, a tall woman wearing dark sunglasses. "When you think it's safe, you can pull out," she tells me. I turn on the engine, signal to my left, put the car into drive, look behind me multiple times, and when the coast is so clear there couldn't even be a mosquito flying in my lane, I finally pull out. As we approach that damn turn where I caused the examiner to break last time, I slow to a full stop. I wait for what seems like an eternity until I lift my foot off the brake and start inching in to make the right. I exhale a little as I drive on and she says nothing. Knowing that cars exiting from the freeway will start to enter the lane next to me, I look behind me a ridiculous amount of times again. She tells me to make a right turn, I do, and when she doesn't snarl at me I exhale a bit more. She tells me to turn into a residential street and as I do, I see an old lady in a maroon sweatsuit standing by a car in the distance. Good god, is she crossing or what? I thought. I decide it's best to be comically cautious and slow to a complete stop before the lady. "She's not gonna cross, you can go ahead," the examiner said.

We get to a dead end and she tells me to do a K-turn. I do it perfectly, remembering every last signal and head turn that I'm supposed to perform. She tells me to parallel park and I do it pretty well, I think. She doesn't even open the car door to check how far I am from the curb, and before I fully put the gear into park she tells me I can pull back out. We drive back to the test site and pull over. She punches some buttons on her machine before uttering those truly divine words, "You passed." I barely hear the spiel about receiving the license in the mail and blah blah blah ... the celebratory fireworks and marching band making a racket in my head are just too loud.

I get out of the car and do three tiny jumps of joy, smiling from ear-to-ear. I was done. I never ever have to worry about this damn test again.

Now back to the rest of my life ... where will I bungee-jump?


I dedicate this achievement to Kate Mawby, who ended up driving almost 2,000 miles on our road trip because of my lack of a license. I owe you another road trip—driving's on me.
Posted by Celine | 30 Before 30 at Wednesday, October 20, 2010