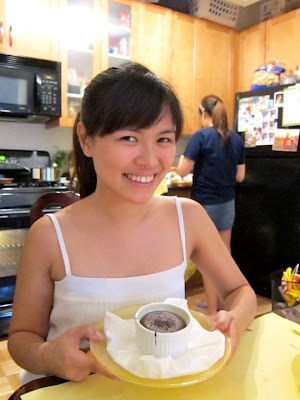 As always, my first shot at knocking something off my list began with 20 minutes of me thinking, "You're really not very good at this, Celine." It's actually not that complicated to make these Molten Chocolate Magic cakes, but let's just say I'm not exactly hardwired to give boulangeries a run for their money.
First of all, I completely forgot to buy sugar! So I found myself wandering the deserted and mostly shuttered Wall Street area on a rainy Sunday in a seemingly futile quest for the sweet stuff. I did eventually find some sugar but found the expedition so stressful that I forgot to pick up vanilla ice cream to go with the chocolate cake and came back with a six-pack of Blue Moon instead. I may not be hardwired for whipping up freshly baked croissants for breakfast, but you can always count on me when it comes to foraging for beer.
Ok, maybe I'm being a tiny bit overly dramatic here. Once we actually got to the baking, I wasn't entirely disastrous. I didn't burn anything or anyone while melting the butter and chocolate. I separated yolks from whites without too much drama. Each ramekin remained in one piece. At no point was the kitchen floor covered in a sea of flour as I dusted the molds. I did, however, find out that my phenomenally weak arms do not have sufficient juice for whisking those eggs into a frenzy. It must have pained Mitch to watch me try for five minutes before she just grabbed the bowl and showed me how it's done. As you can see from that picture way down below, I tend to whisk in slow motion with a dreamy smile on my face while Mitch gets down to business. And so it was that I learned my first valuable baking lesson: when a recipe presents the choice of using a whisk or an electric beater, just use the damn electric beater. Why? Because the last time I checked, my name wasn't Nigella Lawson. 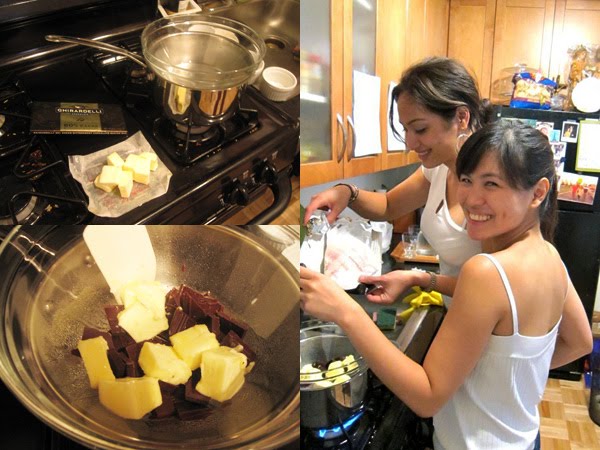 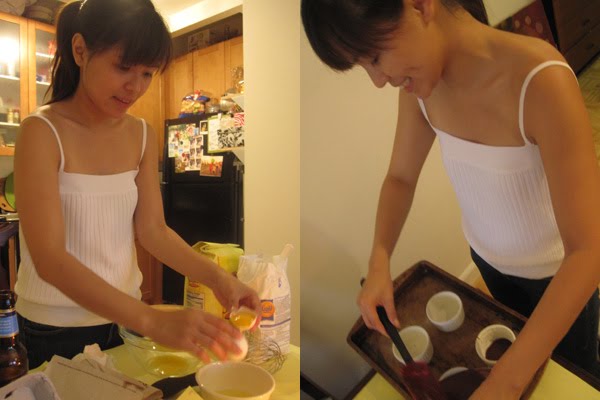 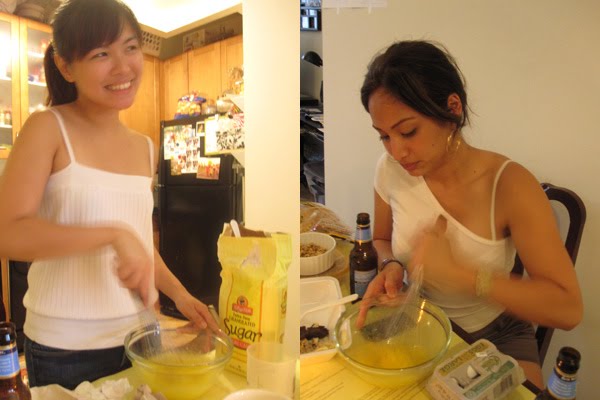 It was great to have someone who really knew what she was doing beside me as I attempted these molten magic cakes. Had it not been for Mitch, I would've easily botched up a few things. For one, when she mentioned tempering, my reaction was, "Huh? What's that?" For the folks out there who are as clueless as I am, tempering means slowly streaming a hot liquid into eggs so that the liquid is incorporated into the mixture without actually cooking the eggs. If Mitch hadn't been around, I guarantee you'd be looking at pictures of chocolate scrambled eggs right now, rather than chocolate cakes. But since she was there to save me from myself, I have this to show. Tadaaa! 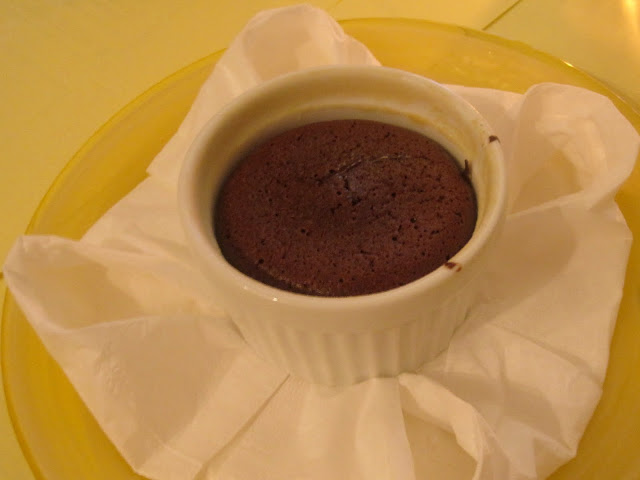 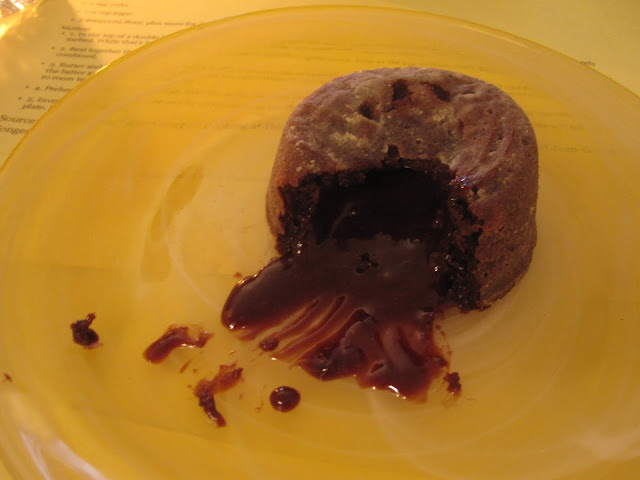 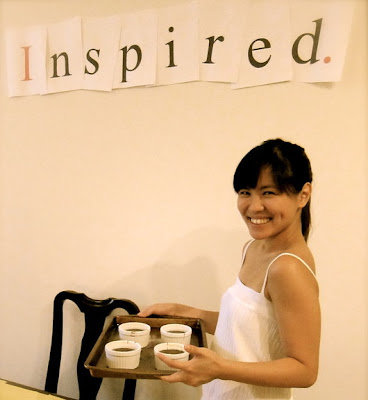 The reviews were good as far as taste was concerned but I definitely need to work on presentation. Dusting the ramekins with flour made the cakes look sloppy so I would either use cocoa powder the next time or serve the cakes right in the ramekins. No matter what I do though, I'd better not skip the ice cream next time. The general consensus was that the dessert would be so much better with ice cream.
I have to say though that this is a pretty good choice for my five-course meal end goal. This dessert can be made ahead and just popped in the oven when it's time. And really, it's so little effort for something that tastes so yummy. It's definitely the perfect pick for a relatively inexperienced cook with a crazy ass goal of eventually putting together a five-course gourmet meal.
Speaking of said crazy goal, Mitch came up with a pretty cool idea for completing my gourmet five-course meal challenge. Since my approach to this challenge has been to coerce my chef friends into teaching me how to cook stuff, Mitch thinks it would be funny if my "final test" was to cook for all five chefs who taught me my dishes. And then, they get to critique me, as if I was a Top Chef contestant. Intimidating as hell, but that truly would be the ultimate test, don't you think?
There's no shortage of ways to dig myself into an ever deeper hole ...

Photo credit: "Inspired" photo by the beautiful and impossibly talented Bads Corpuz-Perez. Thanks again to you and your hubby for letting us take over your kitchen!
Posted by Celine | 30 Before 30 at Tuesday, June 15, 2010