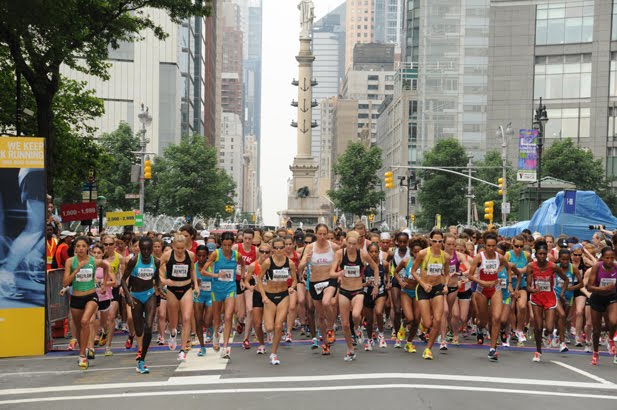 What an experience it was to be part of the NYRR New York Mini 10K yesterday. It was my first big race in the Big Bad Apple, and it was pretty amazing. It took my breath away to look down Central Park West and see it packed with runners as far as the eye can see. A special bonus: getting a high five from Boston Marathon champion Kara Goucher. There had been a lot of publicity about her and Paula Radcliffe who were supposed to run the Mini while being very pregnant. Radcliffe did run the 10k but Goucher had to skip the run due to a back injury. She spectated instead and joined Paula and her 3-year-old daughter Isla for the run towards the finish line. Radcliffe who is five months pregnant finished the race in 44 minutes and 36 seconds. 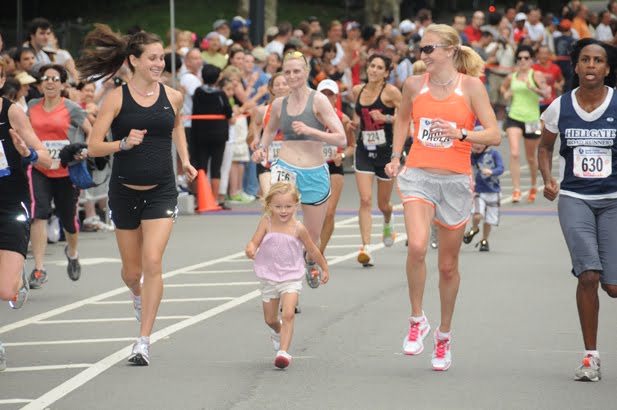 I finished with an official time of 1 hour and 4 minutes, which is a massive improvement over my last 10K—though clearly, I am not going to be breaking any world records in this lifetime! Though I was certainly much faster this time (specially since I did not stop for pictures—not even for the male spectators decked out in colorful wigs, makeup and full on boobs on Central Park West), I have to say that I had a really rough time. I didn't stick to my pace because I impatiently wove through the crazy traffic of runners, and I paid for it dearly once we hit Harlem Hill. I ran this quite well on my practice runs but come the actual race, I was debilitated with side stitches and had to stop twice to walk! I was not too pleased with myself for that, but it's a good lesson to learn early on that I have to be vigilant about sticking to my pace. In this race, I also found myself completely embroiled in mind games. I alternated between wanting to just go home (I almost threw in the towel when I neared the path that goes straight to East 97th Street), berating myself for guzzling half a bottle of wine with Mitch on Friday night, and questioning my mental health for putting myself through this torture. The Mini 10K was seriously the farthest thing from a walk in the park! I was literally huffing, puffing and almost hurling by the time I got to the finish line.

But it just goes to show how running can be a funny, funny thing because as torturous as yesterday was, I can't wait to hit the pavement again. The next goal now is to double my mileage and survive the Queens Half Marathon in July. Why I keep getting myself into ridiculously difficult situations, I really don't know.

Before I sign off, I want to give a shout out to my rock star friends Jessica, Jodie, Mitch and Inna who ran the race with me yesterday. Although I ate their dust pretty much the entire time, it was fun running alongside them part of the way and sharing battle stories after the race. I also tip my hat to Tricia who had the gumption to race AND bake cookies afterwards for our World Cup festivities. Your cookies were almost as amazing as the nap I took post-race ;-) You girls are truly phenomenal! 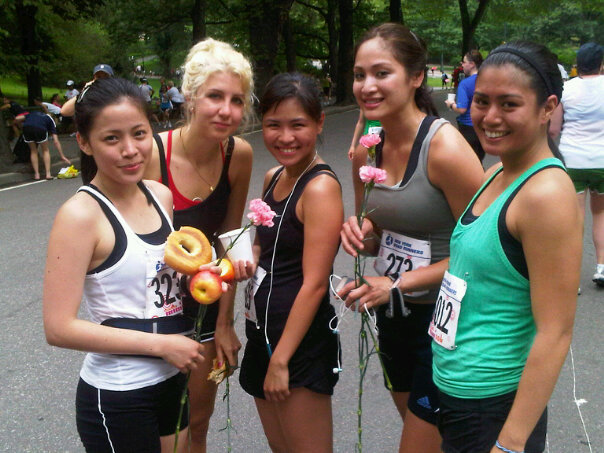