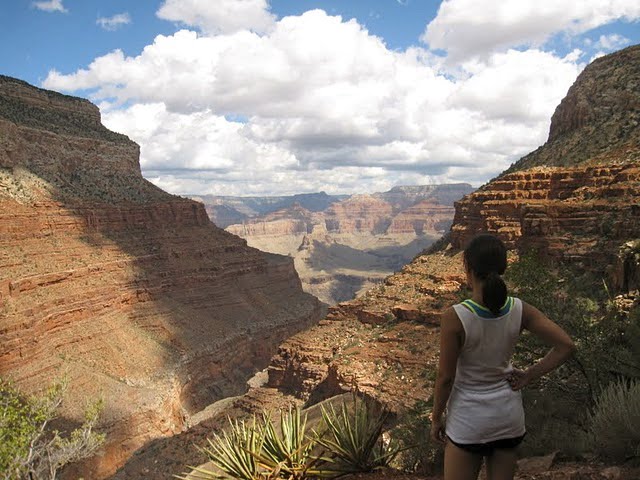 After all the amazing things we encountered on our Grand Circle road trip, it seemed odd to me that I singled out seeing the Grand Canyon for my 30 Before 30 list. It just goes to show how little I knew about this country that I've called home for the last 4 years. Living in New York tends to make people think that they're in the center of the world and that not much else matters outside the city lines. But every time I go a little bit further and explore a little more, I realize how much this country has to offer. It's not all strip malls and fast food chains. There's such a varied and breathtaking landscape all across the country, and it's yours to discover if you allow yourself to wander.

Kate and I were glutted from gorgeous scenery by the time we reached Highway 64, which leads to the East entrance of Grand Canyon National Park. The road still had a few surprises for us, like this gorgeous view that seemed like a set from Lord of the Rings: 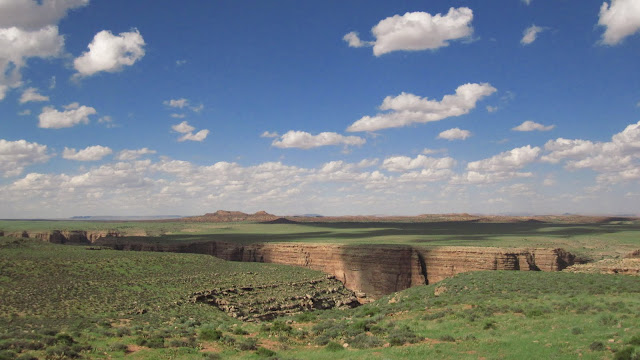 After over three hours of driving, we finally entered Grand Canyon National Park. Truth be told, our first impression was not too good. We stopped at the first overlook, Desert View, and felt like we'd arrived in Disneyland. While Kate and I were waiting for our turn at the restroom, we heard a conversation that made our eyebrows hit the ceiling.

Girl: Mom, there aren't any toilet seat covers in this stall!
Mom: Just use toilet paper.
Girl: But all the other ones have it ...

It would be an odd thing to hear anywhere I suppose ... I mean, what kind of life have you lived if every public restroom you've ever been to had toilet seat covers? But it was particularly weird to two girls who'd just spent the night stomping around before popping a squat out in the wilderness in fear of getting bitten by a rattlesnake. You're bothered by a lack of toilet seat covers? Really?!

When we got to the actual overlook, the view of the Grand Canyon left us feeling ... underwhelmed. Looking at the pictures now, I don't know why since it looks pretty darn gorgeous. 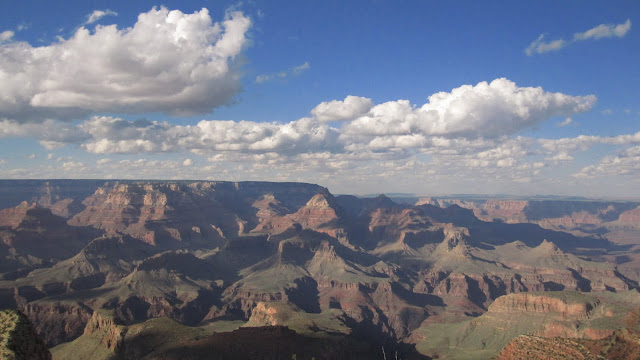 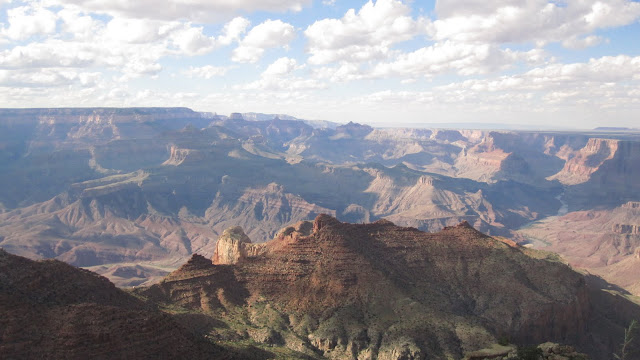 But that's precisely the problem, I suppose. The vastness of the Grand Canyon is such that it's quite difficult to comprehend. I felt like I was looking at a picture or a fake backdrop on a Hollywood set. It took hiking below the rim for us to feel a connection and finally appreciate how spectacular the Grand Canyon is.

On our second day in the Grand Canyon, we ventured westward to hike the Hermit's Trail, described by Rough Guides as "peaceful, seldom busy." It turned out to be more along the lines of absolutely deserted. We only saw 5 hikers during our 3 1/2 hour hike, and one of them was a ranger who, upon our mentioning the scant traffic on the trail, commented, "There's a reason why it's called Hermit's Trail." Kate and I picked this hike to be away from the park's crowds, but we failed to check on it's level of difficulty. We looked at each other sheepishly when we read the description on the way there:

Both of us, clad in the shortest shorts this park has ever seen and trainers rather than hiking boots, must have looked like a rescue mission waiting to happen. Hikers we encountered, who were decked out in hiking boots and poles, seemed to think so and looked us up and down with disapproving eyes. As we clambered down the so-called hiking path, we saw how it might be prudent to wear hiking shoes in this terrain: 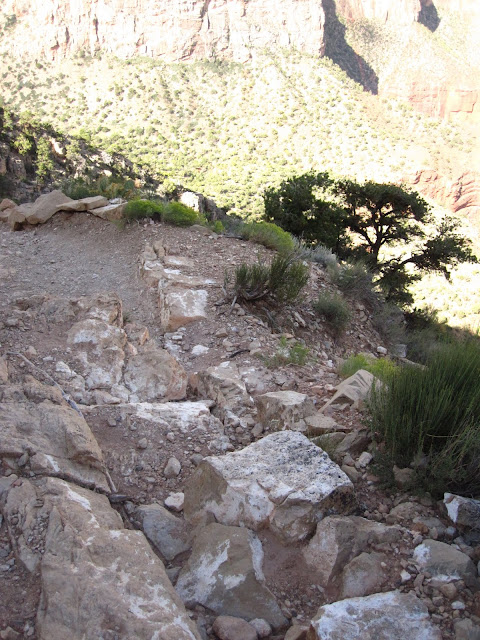 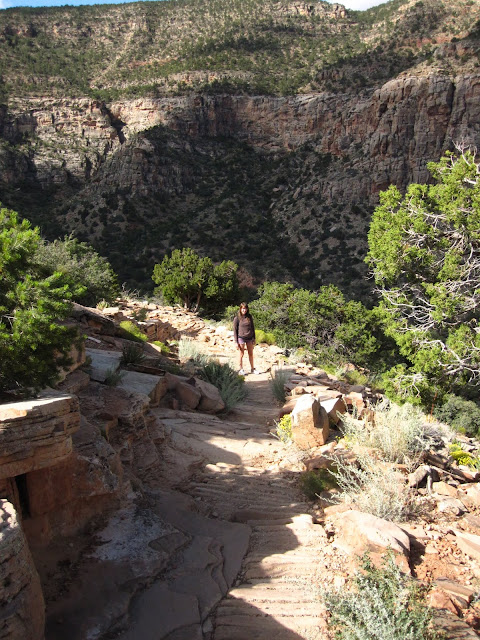 Then again, another hiker decided to chuck his boots so maybe our choice of footwear wasn't too bad. At least we kept ours on for the entire hike. 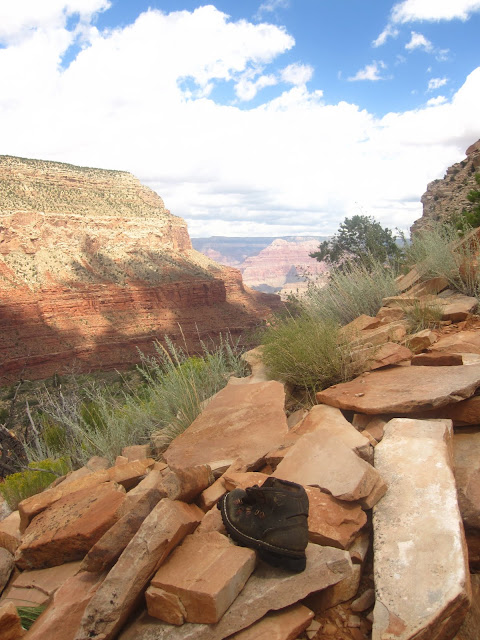 Given that the "trail" can just be a jumble of rocks at times, there were instances when we unintentionally took a little detour off the path. Kate and I took a whole bunch of photos at this point before realizing that perhaps this wasn't exactly part of the trail. 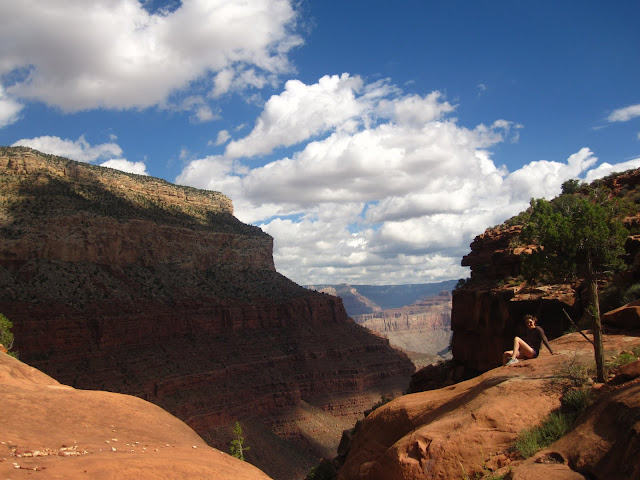 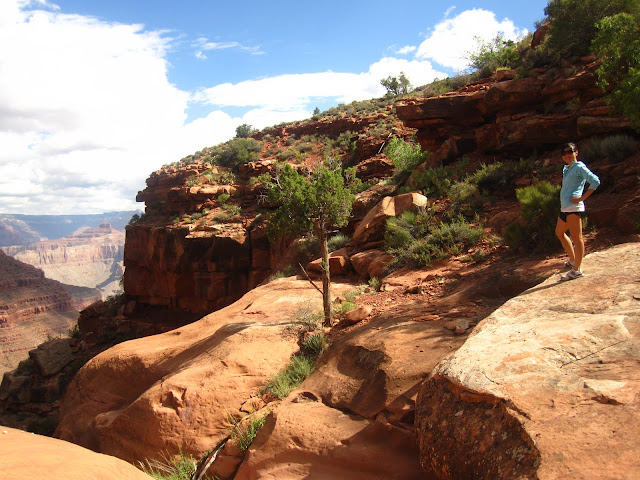 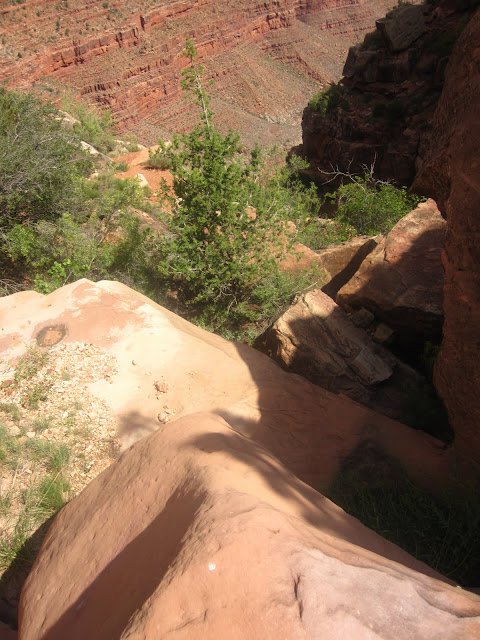 But eventually we did make it to the little shack beside Santa Maria Springs without too much trouble. 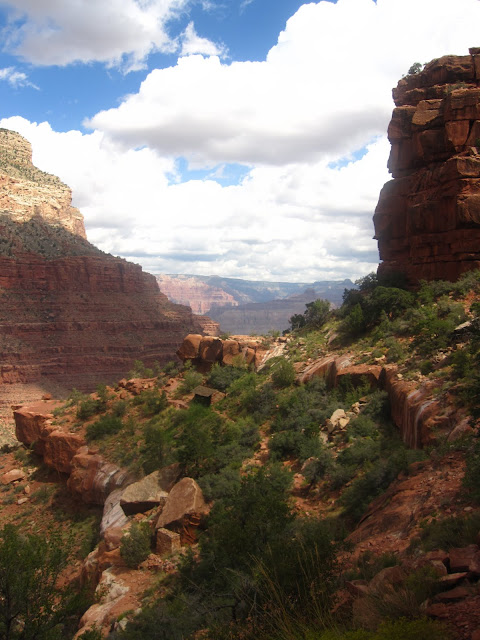 I must admit, I was a little disappointed that we'd trekked all this way to find a faucet trickling water into a tub. I'm from the Philippines, after all, where when we say "springs", you can expect to see something like this. But I suppose it was the journey and not the destination that mattered in this scenario. 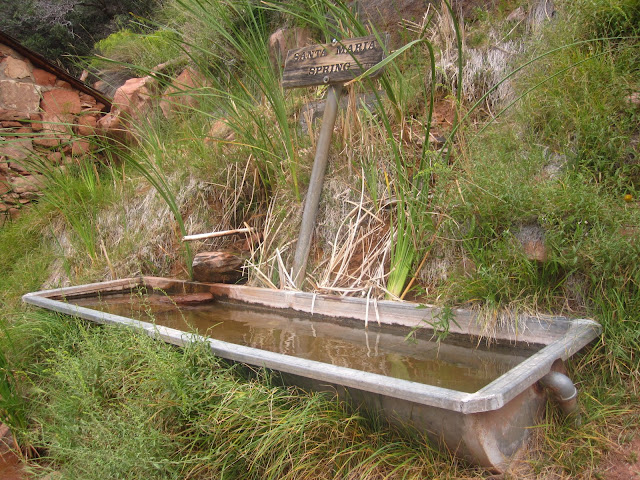 At the shack we ate our apples and some trail mix, and just sat down to chill for a bit. Kate's adventurous spirit kicked up and for a second, she wanted to go down further. This time I couldn't be convinced though, and I persuaded her that it was probably better for us to go back up even if we didn't feel tired at all. We agreed in the end that it was better to stick to the plan, and I am so glad that we did because the hike back up was pretty tough. The elevation gained from Santa Maria Spring to the trailhead is 1689 feet in just 5 miles (that's 815 meters in 8 kilometers, non-Americans). I was huffing and puffing at the steep inclines. At some point, I had to take off my hat, sunburn be damned, because I was overheating even though I kept chugging water. I understood the wisdom of the sign at the trailhead that said, "Hiking to the Bottom: Optional. Hiking back to the Top: Mandatory." It's a tricky hike because the tough part comes in the end, when you're already tired. It's easy to go farther than you can handle when hiking the Grand Canyon because the first half's all downhill. You have to make a conscious effort to conserve energy for the hike back up.

We made it back up, of course, and in pretty good time, too. The hike is estimated to take 5 to 8 hours, roundtrip, but we did it in 4 1/2—take that, snobby pole-weilding hikers! Despite the difficulty and the ho-hum "spring", I really enjoyed doing this hike—not so much for the view but because it's such an intimate way of getting to know the Grand Canyon. To have this solitude at the peak of summer is a gift. And, I have to admit, I kinda liked having to hike a crazy, rocky, barely-there trail—what an adventure! The next day, we took another amazing hike with truly sublime views of the Grand Canyon, but I'll leave that story for the next post ...