"This road is kind of boring. Give us something, dammit," I dared the asphalt road that seemed to stretch endlessly in a pin-straight line surrounded by lackluster pine trees and gray skies. We were a little grumpy because of our missed opportunity to hike into Natural Bridges. That we now seemed to be stuck on a dour two-hour drive to Monument Valley did not do anything to lift our spirits.

That is, until we reached a sign that read:

We were entering Mokee Dugway, a curving and unpaved road that starts at an elevation of 6,425 feet and drops a staggering 1,100 feet in just 3 miles. As we drove over to the top of Cedar Mesa and prepared to tackle this monster of a road, we found ourselves completely distracted with the view ... 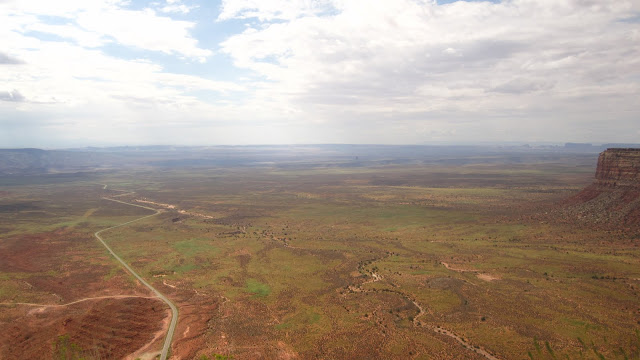 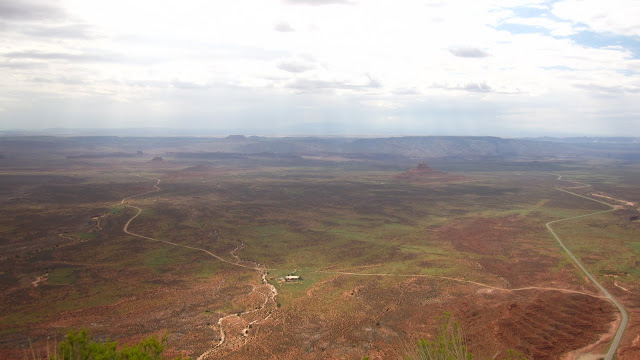 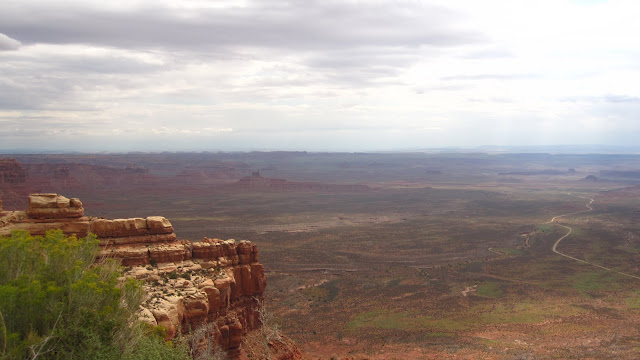 It's impossible to take a picture that captures the expansive scene. If you stitch together the pictures above in your mind, you'll have an idea of how staggeringly beautiful the view is (or you can take a look at this guy's handiwork). Rock formations seem to rise up like ancient pyramids and towers from a land painted in deep reds, greens, purples and blues. From behind distant blue mists, we could glimpse Sleeping Ute Mountain, the Valley of the Gods, and Monument Valley. I'm not sure how much time we spent there, trying in vain to capture the scene in pictures. At some point we realized it was futile, gave up and just tried to soak it all in. 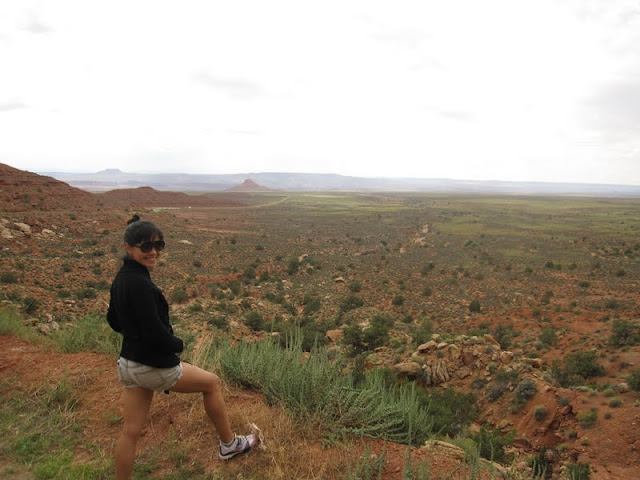 When we'd had our fill, we got back on that so-called-road. Mokee Dugway dates back to 1958, when it was constructed by mining company Texas Zinc to transport uranium ore from the "Happy Jack" mine in Fry Canyon to the processing mill in Mexican Hat. If you've ever driven on it, you'd agree  that it seems  very litle improvement has been made on this road since then. As we went along gingerly down Mokee Dugway, Kate and I had this conversation:

Kate: Are cars meant to drive on that road?
Me: Which one?
Kate: I saw it from the top. It just drops straight down. It looks like cars would just fall right off.
Me: Um, you mean the road we're about to turn into?
Kate: What? You're kidding, right?
Me: Um, no. We're turning into it in about 3 seconds ...


Thankfully the road looked a lot worse than it actually was. But the drive was still challenging, what with the steep drops and extremely narrow road that for the most part can only handle single lane traffic. I wasn't able to take a good photo of the road but check out this picture that I grabbed from Wikipedia:

With Kate's excellent driving skills, we made it down Highway 261 in one piece and lived to see the delights this joy brings. We zipped past the Valley of the Gods to gawk at these monumental formations sculpted by Mother Nature. 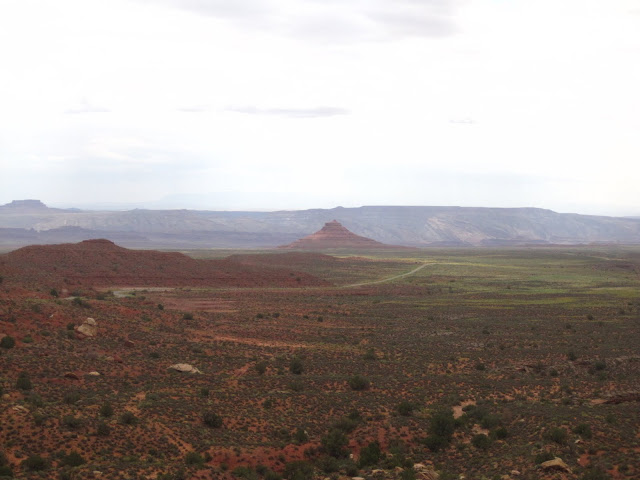 At the junction where Highway 261 and Highway 163 meet, we checked out these pretty hills with Missoni-esque zigzag patterns on the side. 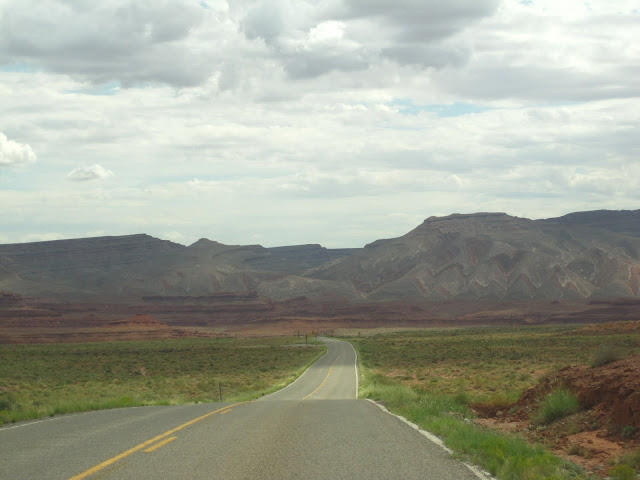 We stopped to take pictures at the Mexican Hat, which does in fact look like an upturned sombrero. 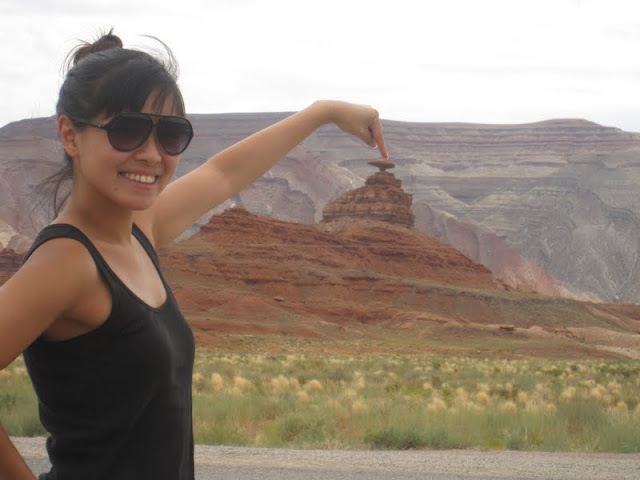 We kept driving on Highway 168 and just marveled at the completely new landscape surrounding us: mostly flat and desert-like, with massive rock formations and buttes sprouting out of the land in random spots. 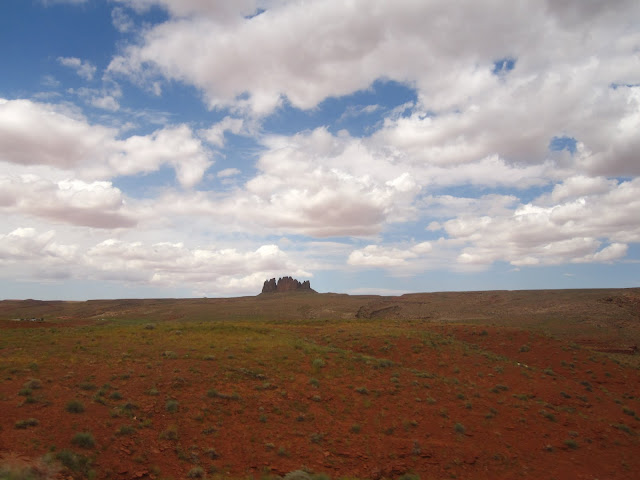 Soon we reached that iconic stretch of road leading to Monument Valley. It lasted just a few seconds but it was quite a moment for me since I'd been picturing driving down that road since we started planning this trip. 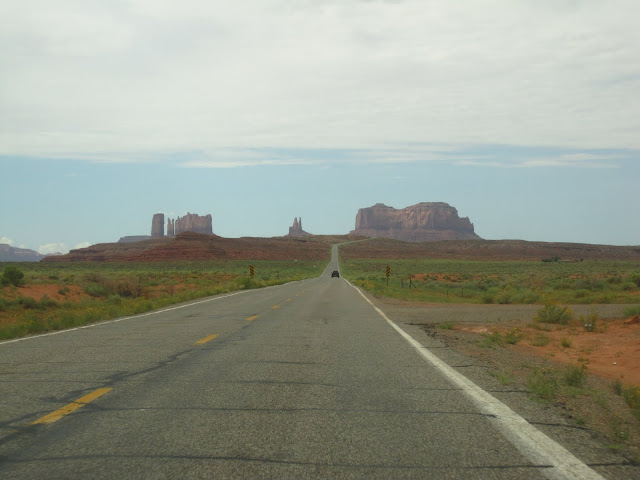 This road is best remembered as the road where Forrest Gump stopped running. I completely forgot this little tidbit but thankfully, we took a running shot of me on the same road by sheer coincidence. 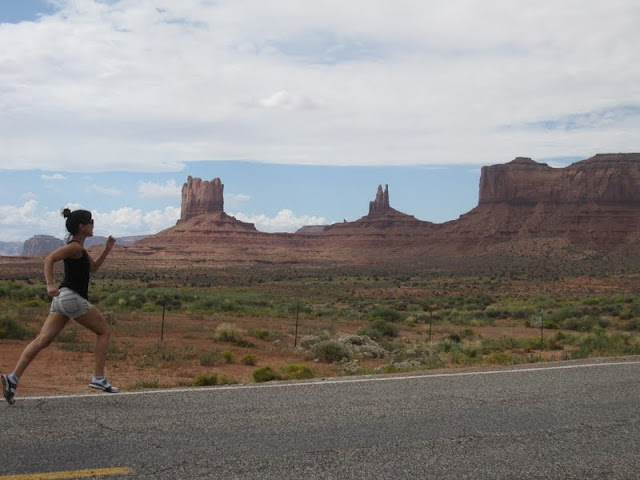 At the end of that road we found one of the most spectacular spots in America. Stay tuned!