We had only planned on doing one hike in the Grand Canyon. But after a park ranger told us about the stunning views and beautiful colors we could see by hiking Bright Angel trail and South Kaibab trail, we just couldn't resist trying one more. So Kate and I decided to spend our last morning in the park and on the road hiking down the South Kaibab trail to the overlook dubbed Ooh-Aah Point by the park's rangers. We didn't want to do anything too strenuous since we had to do the long drive back to Las Vegas in the afternoon. So this hike was perfect at just 1.8 miles roundtrip. After a breakfast of PB&J sandwiches and hot chocolate, we caught the shuttle bus to Yaki Point, where the trailhead begins.

Like good little hikers, we set out at around 9. The South Kaibab trail has no shade so it's best hiked early in the morning so you don't have to do the hike back up in full sun. The trail was positively luxurious compared to Hermit's Trail: steep but well-maintained, not strewn haphazardly with rocks, and well-defined so there's no possibility of wandering off the path. Strangely though, I felt less stable with this smooth dirt path and walked down carefully, fearing I'd slip and fall down. I did actually fall down at one point, though in keeping with my usual practice of having terribly unexciting accidents, I was just standing and waiting for a group to pass when I somehow slipped fell on my ass. I really wish my "injuries" would occur while I'm doing something exciting but that never seems to be the case. 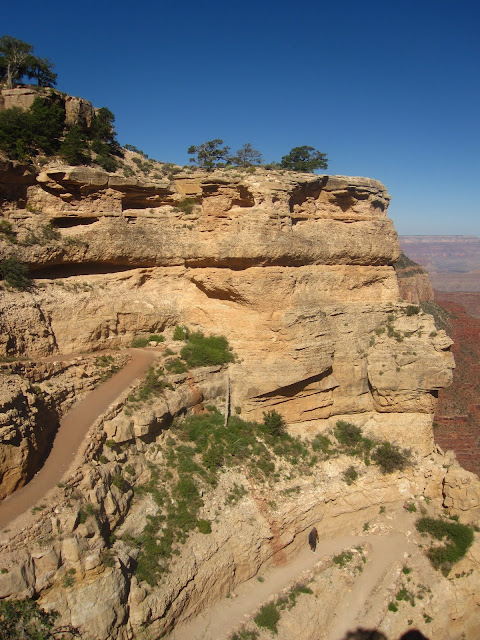 The path was also a lot busier. We didn't pass any mules but there were hikers of all ages and levels of physical fitness on this path. And the views were in fact quite wonderful. The colors of the canyon are quite different here compared to Hermit's trail. You'll find shades of blue, green and purple mingling with the fiery orange. And as the path follows a ridge line, the gorgeous views are largely unobstructed throughout the hike. 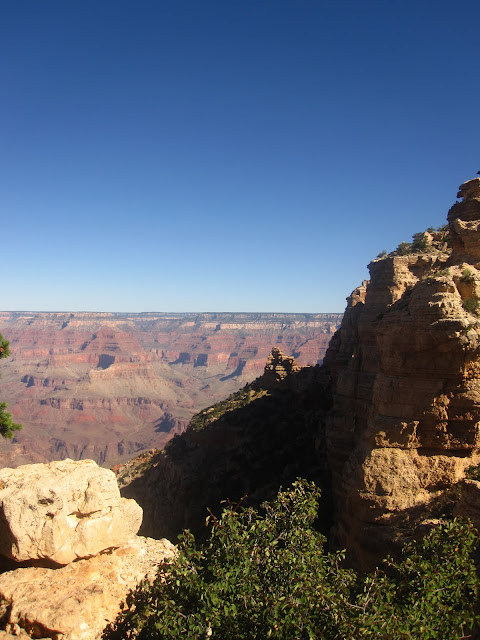 It didn't feel like too long after we started the hike that we reached a wide opening marked with big slabs of rock and crowded with people taking pictures. Was this Ooh-Aah Point? The view definitely deserved an ooh aah but there was no sign marking it so we weren't sure. 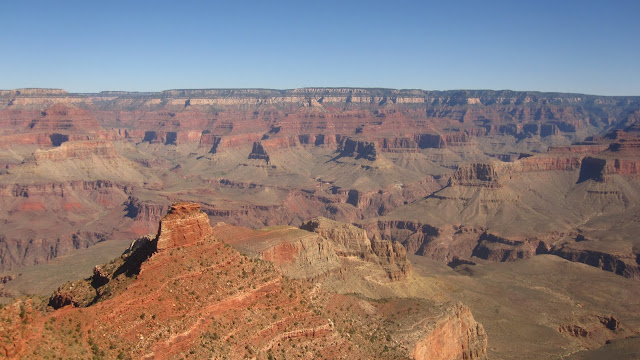 I thought about our hike to Angel's Landing and all the times I thought we were there when we really weren't and decided that my instincts couldn't be trusted on this one. Just smile and pose, Cel. 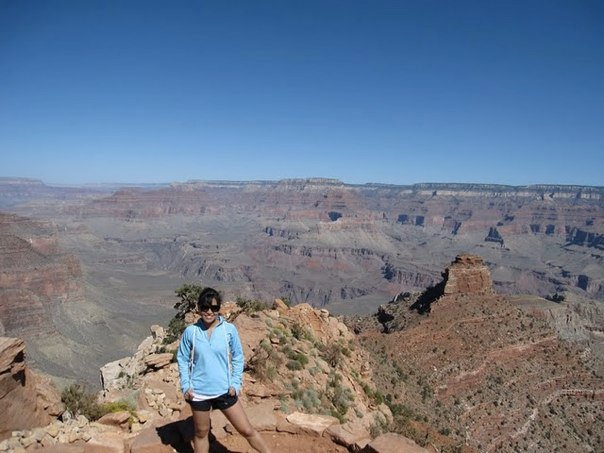 "There should be a sign if this was it, right?" Kate asked.

"I guess so," I replied. "There were signs for every single point on Hermit's Rest, and that isn't even supposed to be a maintained trail." While we were having this conversation, people just kept walking past us and down the path. I surveyed a group of people who were coming up and turned to Kate. "Some of them are wearing jeans, for crying out loud, and they just came from down there! This probably isn't it," I decided.

And so we went. We could see a small landing below where people were milling about, and it seemed like more of an Ooh Aah Point than this one. Three fourths of the way down, my knee problem reared its ugly head. I started feeling this pain in my kneecap towards the end of the Bronx half marathon a few weeks before. I'd feel a pain on the side of my left kneecap every time the course went downhill, and it got so uncomfortable I started wishing for uphill slopes, which I can be sure no runner ever does.

"Are you okay?" Kate asked as I winced with every other step.

"Yeah, it's fine, I can make it down there. It's only going to hurt while we're going downhill. I'll be totally fine for the hike up," I said. We kept trucking on (well, Kate trucked while I kind of limped) until finally we reached the landing. Kate who was ahead, looked at the sign and started to laugh. "Look at this," she said as I approached. 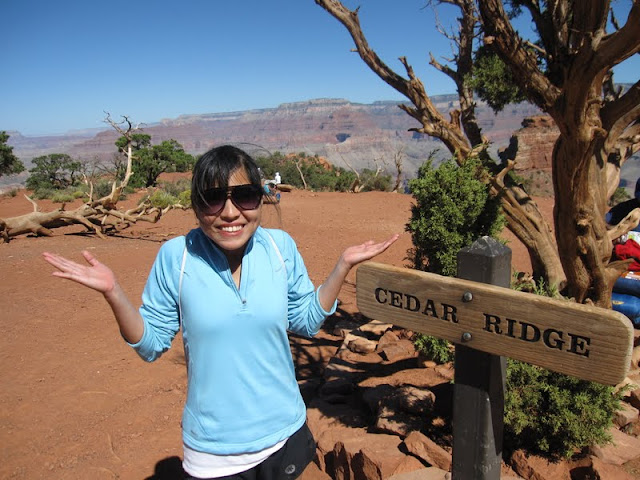 Whoops. We unintentionally hiked more than half a mile down to Cedar Ridge. It's too bad I didn't see this info sheet on Kaibab Trail until now because then I would've known that Ooh-Aah point has "No sign" and is simply the "point where trail opens to a WIDE view." Oh well. We chilled out under some shade and had our apples and trail mix. I did some stretching to hopefully loosen up my quads and hamstrings, and alleviate the pain a little bit. And of course we took loads of pictures. 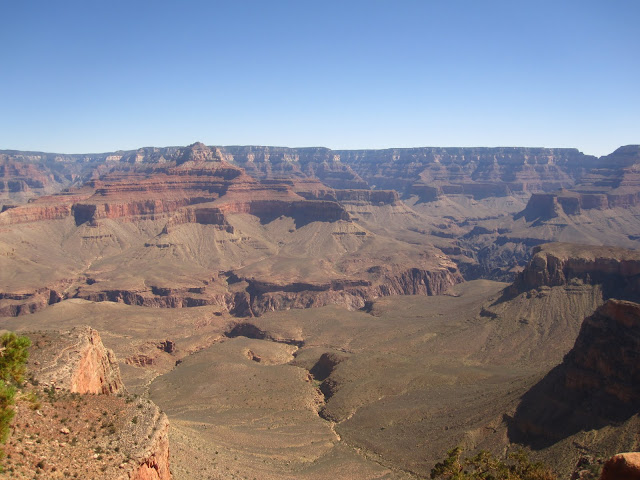 Deeper into the canyon, you can see the layers of rock exposed and imagine the millions of years worth of stories they probably tell a geologist. I just think they're pretty. 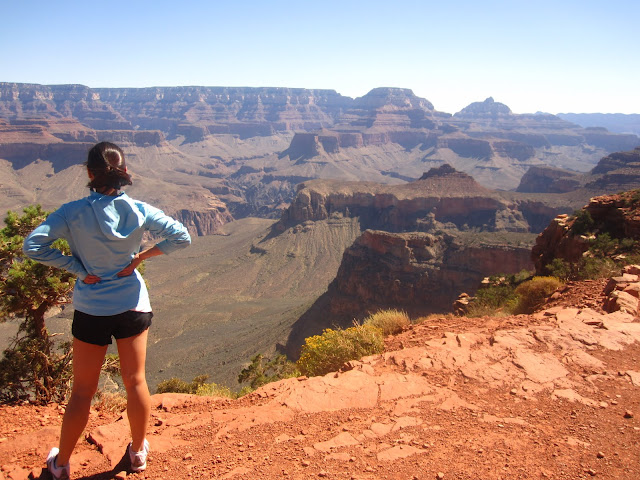 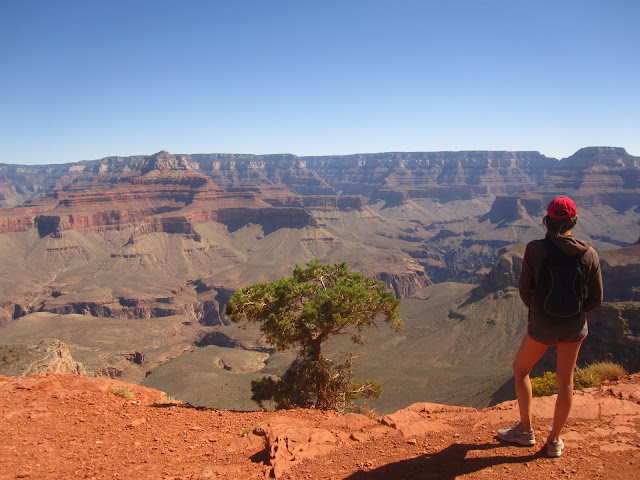 We didn't stay there too long since we'd accidentally doubled the length of our hike and were now totally off schedule. Thankfully, the way up wasn't as tiring compared to Hermit's Trail's crazy uphill climb. We stopped for one last photo at what should've been our destination: Ooh-Aah Point. 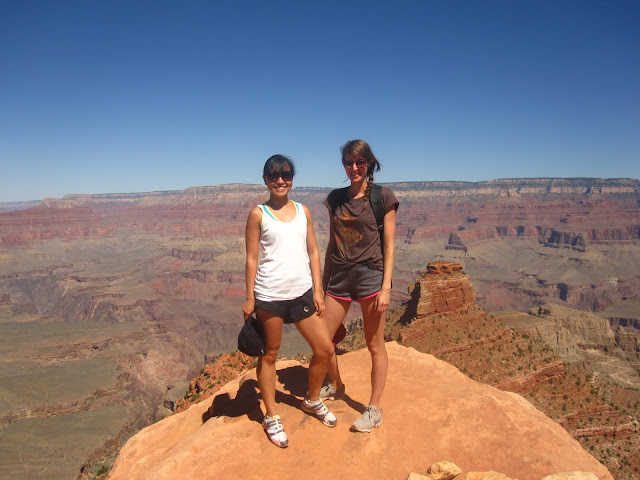 This is how we wrapped up our visit to the Grand Canyon. The hikes were the best part of our visit, and I hope that if you come to the Grand Canyon and are physically able to, you venture below the rim, as well. There's a whole other world to be discovered out there. I feel as if my encounters with the Grand Canyon are still unfinished, and I hope to visit the park for a longer time someday to hike all the way to the bottom. As always, traveling just opens your eyes to how much more there is to see. So for now, I've checked off "See the Grand Canyon" on my list. But in my mind I say, "I'll be seeing you again."