So it turns out a two-day drinkathon isn't the best way to prep for a 20-mile run.

Last week was a tiring and stressful one at work, so even though I had a Sunday 20-miler, I allowed multiple beers to wash my exhaustion away on Friday. The next day, I hauled my carcass out of bed for brunch with Kathryn and Tricia at Harry's, a Financial District spot where an entrée earns you free-flowing cocktails. So we had a river of bellinis with a side of French toast, followed by beer at the bar next door, and coconut margaritas at the bar next to that. The thought of the Sunday 20-miler was floating around in my head, but since the sun was still up I let the alcohol keep flooding my veins.
I felt like roadkill by the time we stumbled home. I paid my respects to the porcelain goddess, drank chocolate milk and Gatorade to rehydrate, and hit the sack at 10PM. When I woke up at 5:30 to get ready for the 20-mile Three Bridges/Three Boroughs run organized by the New York Flyers, I felt quite human so I thought I'd gotten away with my drinking spree. But once the running began, I started to inwardly cuss myself out. I felt tired and for lack of a better word, dried up—the exact opposite of how I felt in Staten Island last week. It was not the best way to feel going into my last, toughest and most important long run before the marathon.
Twenty miles is an intense physical and mental hurdle to tackle—particularly for a newbie runner like myself. And the run organized by the New York Fliers is not exactly a walk in the park. It's a serious simulation of the New York Marathon, taking you through three boroughs and two of the very bridges that the marathon course goes through. The route hits Queensboro Bridge at about mile 16 just like the marathon course—a segment of the race described by a lot of runners as one of the most daunting.
View Larger Map
Together with my friends Dwayne, Phil and Jet, I set off with the 10:30 pace group from the Jack Rabbit store on Lexington Avenue between 84th and 85th Streets. We entered Central Park, ran the lower portion of the Inner Loop, then crossed over to the West Side Highway. I was running pretty slow but thankfully, Jet hung back with me. Somewhere on the West Side Highway though, we lost the group and my confidence took a nosedive. Am I really so freaking slow that I've totally lost them? I thought in frustration. Eventually, we found them at a rest stop and realized they'd taken the path by the river while we stayed on the bike path. I felt more relaxed once we rejoined the group but my mental game took a hit.

Soon after, we hung a left and made our way to the Brooklyn Bridge. How strange is it that I could never set aside the time to walk on Brooklyn Bridge and now I've gone on it two weeks in a row?

As we crossed the Brooklyn Bridge, I started to feel a strange exhaustion set in. My legs were fine and I didn't mind the hillwork, but I was just so tired. It wasn't until we crossed to the other side and got to Flushing Avenue that I realized what the problem was: I was overheating. I'd thrown on a running fleece over my tank top to compensate for my itty bitty running shorts (the previous day's boozefest made me completely forget about buying compression tights as I'd planned). But by the time we reached Brooklyn, I was sweltering. What a difference it made to get that fleece off! It drove home the importance of testing out the clothes I intend to wear on marathon day beforehand.
The next glitch in my run hit right when we got off Pulaski Bridge. Since this was an organized run rather than a race, we had to completely stop from running a few times to wait for a stoplight or fuel up on Gatorade and water at the rest stops. The sudden halts wrought havoc on my right knee. I would feel a sharp pain just trying to start back up. When the stoplight changed at the foot of Pulaski Bridge, I failed to launch. I thought I was done for. My right leg simply refused to go back to running and I ended up walking for a good half mile until we reached the last rest stop. Phil walked with me as my heart sunk to a new low. While we gulped down Gatorade under the Queensboro Bridge, I wondered what would happen next. Would I have to get into a cab while the rest of them continued their run?
I'd long thought of myself as a creature who prefers comfort over everything else, so I was pretty surprised that I kept on going. When the group started to run, I first walked across the street then started a slow shuffle, seeing if my legs would agree to keep going. The pain started to subside and once I was back in my stride, disappeared altogether. I realized that if I stayed in motion, I could probably get through this. So up I went on Queensboro Bridge to cross over the East River back to Manhattan. 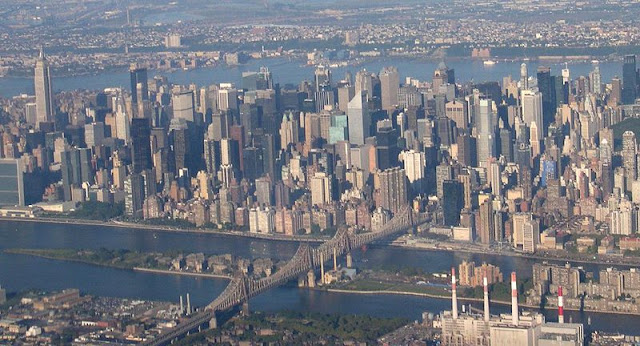 The run was actually a lot more pleasant than I imagined it would be. I reveled in the fact that my legs let me keep on running, and soaked up the gorgeous views of Randall's Island and the New York skyline. Before I knew it, we were down the bridge and running on the streets of Manhattan. I realized how fatigued my legs were when stepping over curbs and weaving around the shoppers outside Bloomingdale's felt like a Herculean effort. But as long as I kept moving, I could keep running. When we reached the inevitable stoplights, I woud run in place so I wouldn't have to restart my legs when it finally changed. By doing this, I made it to Central Park.
The Outer Loop was completely congested because the annual Breast Cancer Walk was going on, so we had to contend with more weaving through crowds on the last two miles of the run. What got me through this part was my familiarity with the route. I'd run the Outer Loop so many times before and I knew it's every hill and twist. Just a little bit more, I kept saying to myself, you've done this stretch so many times. You can do it now. And just like that, I found myself at Engineer's Gate. When we finally reached that point, it was like someone lit a fire under my tush. I just took off for the Jack Rabbit store, eager to reach the end, stoplights be damned. When I finally finished, I was astonished. Somehow I had made it. I didn't collapse in a crying heap at the bottom of Queensboro Bridge. I didn't have to be carried off in a stretcher. I didn't have to walk or crawl my way to the end of the run. I made it.
And I learned some tough lessons along the way. But as my buddy Phil said, "Better to learn them now than on marathon day."

Image of Brooklyn Bridge by Kamilkarp
Image of Queensboro Bridge by Sfoskett
Painstaking mat plotting by Jet
Posted by Celine | 30 Before 30 at Tuesday, October 19, 2010