By the time I left Ibiza for Lisbon, I had a case of the Wanderer's Blues. Exhausted from a week-long American road trip followed by a week-long party in Ibiza, the last thing I felt like doing was going on a solo adventure to a country I've never been to and attempting to pick up a hobby I wasn't sure I'd like. Normally, my default setting is on "wanderlust," but all I wanted was to hitch on the first flight back to New York, veg out in my room with Chinese takeout, and maybe venture out for a run in Central Park. But there was no turning back, no escape hatch in sight. I had already wired the down payment for five days at the surf camp. It was a good thing I couldn't get out of it because had I backed out, I would've missed one of the coolest experiences I've ever had. 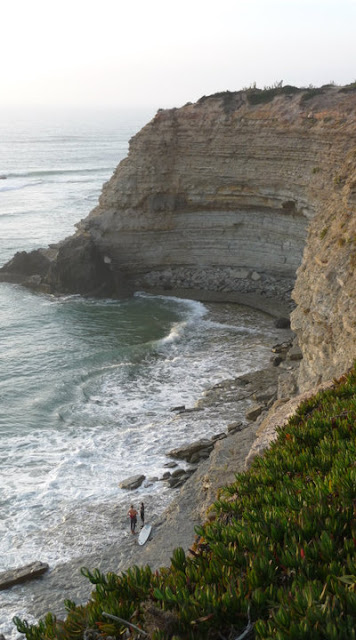 I couldn't see the light at the end of the tunnel though when I woke up from my siesta. I felt sick and tired. I couldn't imagine how my first surfing lesson could turn out well when I felt like crap before I even started. But at 6:15, I begrudgingly headed to reception where I met my instructor Eduardo, a cute Italian boy with sun-bleached blond hair and blue eyes framed with thick blond-tipped fringe. He looked up from his laptop with sleepy eyes and told me we had to wait because the waves were still too high. I wondered how this could possibly go well with an exhausted student and a sleepy teacher.
I didn't have to wait too long to find out. Soon, Eduardo says it's time. I squeeze into a wetsuit (a kid's size 16, unsurprisingly), warm up, and get instructions on the proper way to get up on a surfboard. I try it a few times and then we grab the board and walk towards the water. I guess all those hikes on rocky paths were good practice, I thought, as we navigated the rocky and slippery path to the cove.
I'm not gonna lie, I was a little freaked out. I'm not easily scared (see Exhibit A and Exhibit B) but surfing has always intimidated me. For one thing, I'm not used to swimming in the sea because a lot of places have dangerous undertows in the Philippines. Second, I felt threatened by the surfboard. It's so big (and I'm so tiny) that I need help carrying it. So I worry that at some point, I'll fall off, this massive thing will hit me on the head and knock me out unconscious, and I'll just be found floating somewhere in the Atlantic.
But the fear dissipates quickly because I've lucked out again and get a one-on-one beginner's lesson with Eduardo. With his attention focused on me, I can block out my crazy fears and concentrate on the task at hand. For my first lesson, we stay in the white water, where the waves have already broken but still generate enough power to carry the board. It's a good spot for beginners to get used to the feeling of riding a wave. Eduardo pushes me out on wave after wave, and at first it seems like all I'm accomplishing is swallowing lots of salt water. He tells me I'm jumping up too fast. I need to relax and go through each step without rushing.

And then, as if someone flipped a switch, it happened. With a push from Eduardo, I paddled out and when he said "stand up", I slowly but surely raised my body up, put both feet on the board, and rode the wave. Holy freakin moly, shouted my brain, You just surfed your first wave! Before I got too close to the rocky shore, I jumped off the board and into the water, and turned to see Eduardo with his arms raised victoriously. We did it! At that moment, the exhaustion just evaporated from my body. I paddled back out to him with newfound energy. 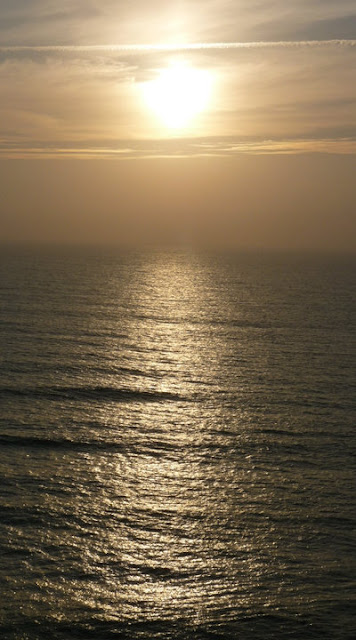 As we drifted in the water waiting for the next wave, the sun set, the thin sliver of a new moon began to shine, and the clouds turned a beautiful pink. I see how people fall in love with surfing. It is so peaceful, just floating on the water under this gorgeous sky. Eduardo keeps pushing me out on the waves and by the end of the lesson I've gotten the hang of getting up. We call it a night, and by the time we get back to the camp I can't find a trace of the exhaustion and mild depression I'd been carrying for the last few days. No part of me feels the slightest bit homesick now. All I can think of is getting up for my 9 am surf lesson.
I grab my keys from reception and my thoughts are interrupted by Jonas, a Brazilian surfer staying at the cabin across mine, who had wished me luck before going out, seeing that I was a newbie.
"So how did it go?" he asked


"It was great," I replied.
"Did you stand up?"
"Yes!"
"You're a natural."
I gave him a big smile and walked back to my cabin, feeling positively high.
This is how addictions begin.

Photos by Noemi Bertel, who happened to be at the top of the cliff enjoying the sunset while I took my first lesson!