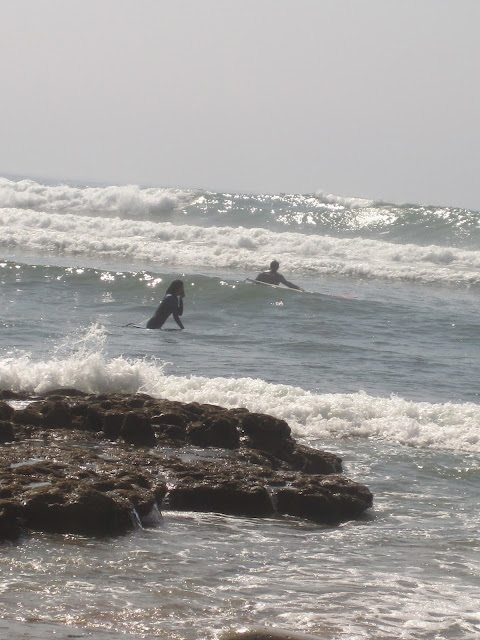 On my second day at the surf camp, I got acquainted with surfing's not-so-fun friend: paddling. If surfing and paddling went out clubbing and someone wanted to hook up with surfing, paddling would be the grenade that a guy's friend would have to throw himself on. They're a package deal. Except no one can take the grenade for me. I have to jump on it myself. (I'm sorry for putting you through that analogy. I've been watching a lot of Jersey Shore.)

Bright and early at 9am, I joined four other students for the morning surf session: dynamic Austrian duo Melli and Magda, and smooth Swiss surfers Noemi and Rolf. They had been at the camp for a few days now, with Noemi and Rolf on the last leg of a European surf trip. I was clearly the runt of the pack. But since there was only one teacher, I didn't have a choice. I had to join them outside—farther into the ocean and past the white water to catch the waves when they actually break. I got thrown into the deep end.

The good news: I was doing pretty well at surfing. I stood up on every wave I was pushed out on and got the prize of riding the waves for a longer time now that we were out farther. It was brilliant. It was exhilarating.

The bad news: I was clueless at navigating the water and pretty shite at paddling. I hadn't figured out that waves come in sets, so after falling off the board, I would try to paddle back out right away even though there were still waves breaking. So I alternated between getting thrown around like a rag doll and paddling in place like a hamster on a wheel. Thankfully Eduardo spotted me most times and rescued me from ... well, myself.

"Can't someone just make a machine that paddles for me? Or maybe tows me back outside?" I said to  Eduardo as I huff, puff and paddle.

He laughed and said, "You don't know how many times I've heard that."

Somehow though, every wave ridden magically erases the drudgery of paddling, so I finished the lesson in high spirits. "You're doing really well for just your second lesson," Eduardo tells me. The teacher's pet in me jumped up and down.

The afternoon session, however, was another story. It was the last Sunday before school began and the camp was crawling with local surf students. The water's littered with students as inexperienced as myself, and I find that the possibility of colliding with another student scares me more than the waves. 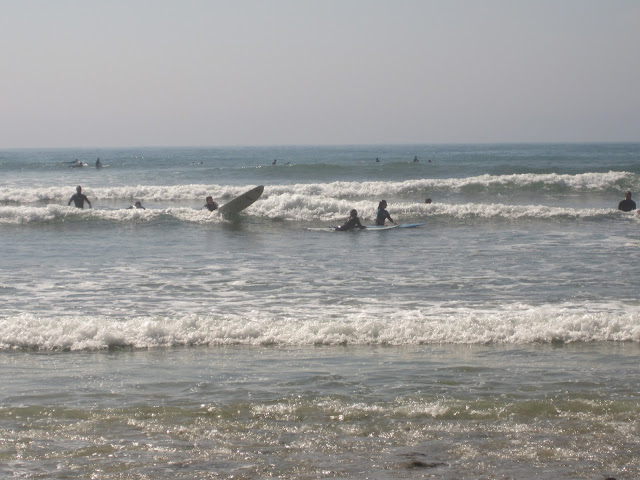 My worry was misplaced (on this day, at least) because in the end it was the water that got me. I was chilling on the board waiting for my turn when the swell brought a massive wave. As it started to crest over my head, the only thought I could muster up was, "Uh-oh." Eduardo saw the wave coming at me and thought, "Bye bye Celine. See you on the beach." I felt like a sock in the spin cycle as this wave and those that followed flung me all the way to the shore. Exhausted, I called it a day and spent the rest of the session hanging out on the beach with Melli.

We capped off a full day of surfing with a couple of bottles of wine and some good conversation on top of a cliff overlooking the water—Noemi's "farewell party" before getting on a train back to Zurich the next day. As we watched the sun set over the surfers bobbing in the water and traded all our random stories, I couldn't believe what an amazing time I was having. 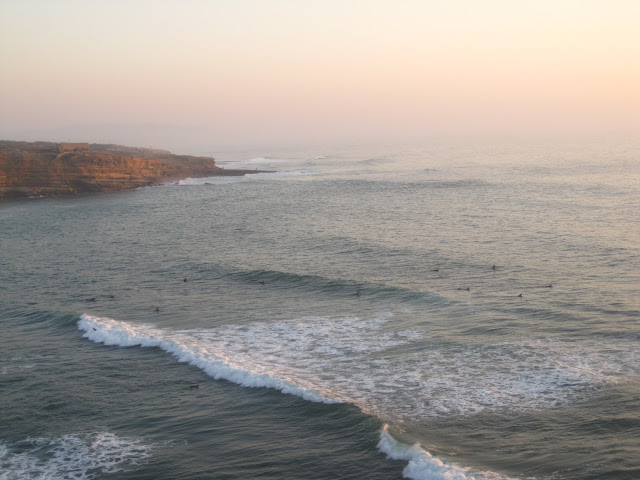 To go into an adventure alone and somehow end up having more good times with very cool people is one of the coolest rewards of taking a risk. If only for these great unexpected experiences, this little project of mine is definitely turning out to be worth every effort. 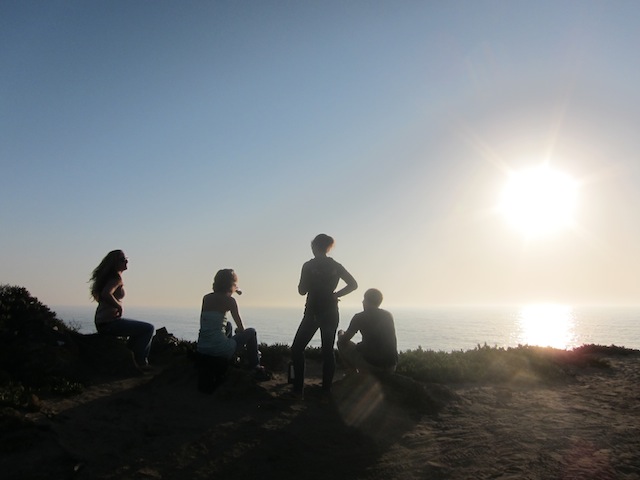 Pictures courtesy of Melli Geh and Magdalena Schwertl
Posted by Celine | 30 Before 30 at Monday, October 04, 2010