Get me to Bonnaroo! 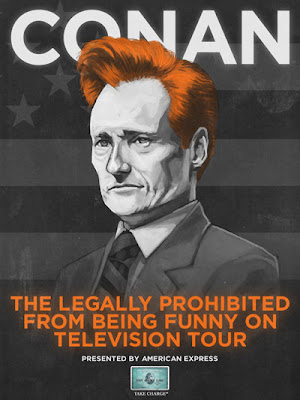 Before Alida suggested I add going to a music festival to my 30 Before 30 List, I was completely clueless about such things. The only thing I knew about music festivals was that Kate Moss made Hunter wellies extremely fashionable when she wore them at a music  festival in Glastonbury. Clearly, my knowledge on this subject is seriously lacking.
So I resorted to asking my peeps on Facebook for suggestions on music festivals to attend. A number of people suggested Bonnaroo but I wasn't particularly set on it ... until I found out today that Conan O'Brien would be doing a show in the comedy tent (nobody told me there was a comedy tent?!) and emcee the main stage on June 11 and 12. What an amazing bonus! The Bonnaroo lineup is already pretty meaty, with Jay-Z, Kings of Leon, Dave Matthews Band, Phoenix, Norah Jones, Kid Cudi, Regina Spektor, Ingrid Michaelson and Thievery Corporation all slated to perform. Coco just puts it over the edge!
I am crossing fingers, eyes, toes and legs that I'll score some free tickets through a contest I joined. I can dream ... In the meantime, if you're suffering from Conan withdrawal, you can follow the funny guy's Tweets.
Meanwhile, I am hitting the sack. Tomorrow is the dreaded day of the double for Bikram. The things I do to make up for irresponsible amounts of Patron shots. God help me ...