You know how I said that my biggest veggie fears were facing down Ippudo ramen and bon chon? Well it seemed there was one dish that was irked because I failed to acknowledge my love for it, and decided to make its presence felt yesterday. Damn you, sisig, damn you. 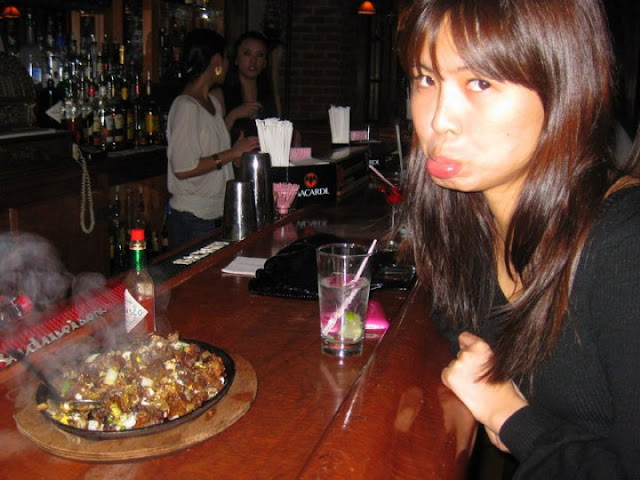 We were at Krystal's Cafe 81, a newly opened Filipino bar and restaurant in the East Village. The torture began with a table about five feet away from the bar ordering a sizzling plate of sisig. The delicious smell of it wafting in the air was sheer torture. And then it got worse. Our friend JM ordered some and Chef Aris Tuazon not only put down the sizzling plate in front of me but proceeded to break up the egg on top and mix the sisig six inches from my nose. I thought I was gonna break down and scarf the whole thing up.
Sisig is made up of ... well there's no delicate way of putting it so I'll just say it: it's chopped up pig's face. Before you get all squeamish and dismissive about it, watch Anthony Bourdain proclaim his love for the stuff: 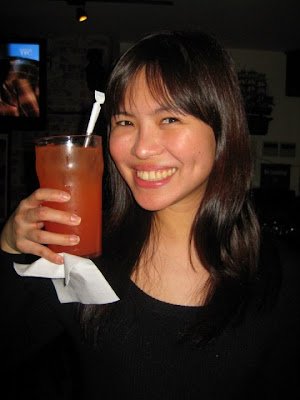 Sisig is good. Really good. Those pork bits that are alternately chewy and crispy, mixed in with onions and garlic and seasoned with sour kalamansi juice and hot sauce are the perfect accompaniment to an ice cold brew. I was near tears for not being able to have any. Chef Aris, perhaps sensing my heartbreak, decided to ease my pain by having the bartender whip me up a Weng Weng. I had Googled the recipe for this traitorous Filipino drink and suggested that they serve it at the bar, so the bartender tried her hand at it and produced a properly deadly Weng Weng. This drink is twice as potent as a Long Island iced tea and contains vodka, tequila, bourbon, brandy, whisky and rum, and is made deceptively fruity with orange juice, pineapple juice and grenadine. Needless to say, drinking too many Weng Wengs can hurt you. I was just glad for the distraction from the pork orgy going on in front of me.

My belief that it's incredibly difficult to be a vegetarian if you love Filipino food was reaffirmed last night. I actually had a bagel with scallion cream cheese before coming to the bar because I had a feeling I wouldn't find anything meatless on the menu. True enough, there was only one vegetable dish that did not have any pork or shrimp thrown in the mix. Filipino food is all about fat-riddled pork, seafood and meat with skin cooked to a crackling crispiness, and other such artery-clogging yumminess. While clearly unhealthy, that food is such a big part of who I am as a Filipino and I don't know that I can completely let go of that. I can (and most definitely will) cut down significantly on the carnage. But life just aint life if you can't have crispy pork skin every now and then. For me, at least.

That said, I am on Day 21 of the experiment and still going strong. I feel like a million bucks every single day, never sluggish or devoid of energy. Trading one good thing for another, I suppose.

It's a beautiful Sunday in New York today. I'm gonna spend it soaking up the sun and then sweating it out at a 5PM Bikram class. Hope there's lots of sunshine (and sweat?) in your day too!