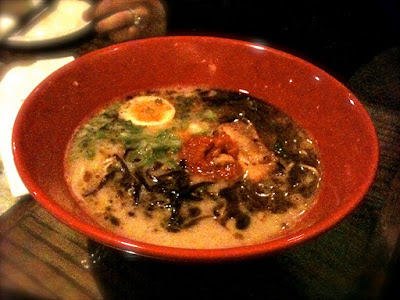 Last night, I faced one of my biggest veggie fears: a night out at Ippudo (my other veggie fear is having a platter of bon chon in front of me, in case you're wondering). To say that I love ramen is a bit of an understatement.  Everything about it from the pork fat-laced broth to the chewy noodles, unctuous pork slices and poached egg swimming in all that hearty goodness just makes my heart beat faster. So when my friends picked Ippudo for our dinner to welcome our dearest Gaea to New York, I have to admit I was pretty terrified. Was I really going to walk into this place where heavenly steamed pork buns and pork-laden ramen bowls are conceived? I scanned the menu in vain for a delectable veggie ramen but found nothing. I hatched a plan to kill my hunger with deep fried Japanese shishito peppers and a Kirin while we waited at the bar, so that I could just pick on some agedashi tofu over dinner. It was a day of mourning for me, as you can imagine since all I really wanted was to dig into a piping hot bowl of Akamaru Modern (pictured right). 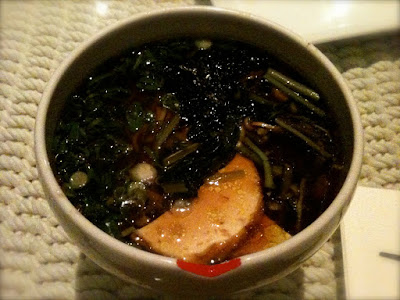 It took an excruciating two hours before we got seated and when I looked at the menu, I went into a panic because there was no agedashi tofu on the menu! Everything remotely enticing to me had cod roe, bonito flakes or some other innocuous form of animal life thrown in! I was coming to terms with the idea that I'd probably have to eat edamame for dinner when it occurred to me to ask the server, "Do you have any vegetarian dishes?" (I actually blushed when I asked. I felt like a fraud knowing I'm just flirting with vegetarianism and not committing to an actual relationship). God bless her for telling me that they actually do have a vegetable noodle soup. It's not on the menu and they keep it hush hush, but they can make it if someone asks for it. Which I did, of course.
Ippudo's veggie ramen utterly and completely kicked Menchanko-Tei's version, I have to say. There's no comparison. The soy-based broth was hearty, flavorful and satisfying, even without getting spiked with pork fat. The soup was laden with greens, scallions, some tofu slices and these incredibly delicious Bunashimeji mushrooms. The little brown mushroom caps had a silken texture and a light, earthy and slightly nutty taste. And of course, there were those perfect ramen noodles to consider. So good. It was not a one-dimensional dish at all, despite being vegetarian. What I liked most of all was how I felt at the end of the meal. I was full and sated, without feeling like I was on the verge of a food coma, as is normally the case when I indulge in ramen. That said, I can't quite subject myself to a life without that tonkatsu soup and tender pork slices (And definitely not to a life without pork buns. Not just yet.). But it's good to know I have options. 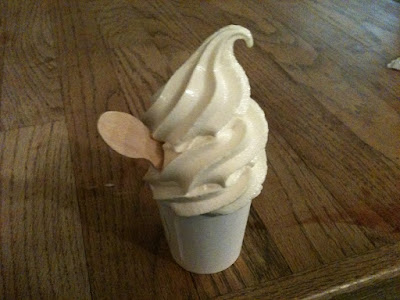 Because I didn't feel like such a heffer, I was able to justify indulging in some cereal milk softserve at Momofuku Milk Bar afterwards. Hooray.
I'm down to the last 11 days of veggie month, and to be honest it's starting to wear on me. But Ippudo's fantastic veggie ramen was a wonderful revelation in this whole process. My expectations for food honestly dropped this month. If something was just "not bad", it was good enough for me. But Ippudo's veggie ramen was actually truly delish. I reckon I'll be back for a bowl before the month ends.
Now, off to bed to re-energize for a morning Bikram class and a long day of walking around, basking in the New York sunshine. Good night!